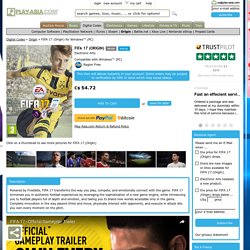 Hybrid Wars (Steam) steamdigital. In 2060, humanity is on the cusp of the second technological revolution. 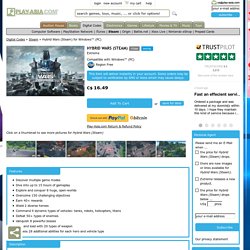 Earth has become a tangled web of information, energy and transportation networks watched from orbit by thousands of electric eyes. Sprawling cities, vast spaceports, and immense military complexes are dominated by tanks, choppers and variety of other machines that rule land, sea and sky. While corporations still pull the strings that control the world, their grip is starting to weaken. Hybrid Warslets you command and upgrade your own arsenal of futuristic mechs to take on wave after wave of enemy forces. Jump into a classic top-down shooter experience as you obliterate over 50 types of enemy and team up with friends to cause more mayhem. 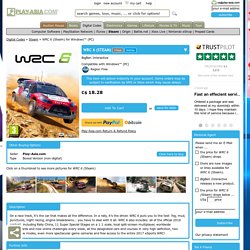 Some orders may be subject to verification by SMS or Voice which may cause delays. Other buying options. Ride 2 (Steam) steamdigital. Milestone Compatible with Windows™ (PC) Region Free This item will deliver instantly in your account. 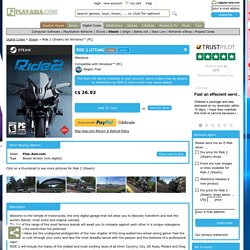 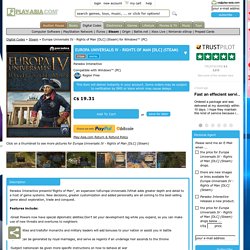 New decisions, greater customization and added personality are all coming to the best-selling game about exploration, trade and conquest. Features include: -Great Powers now have special diplomatic abilities:Don’t let your development lag while you expand, so you can make use of new threats and overtures to neighbors -Personalities and traitsfor monarchs and military leaders will add bonuses to your nation or assist you in battle -Queenscan be generated by royal marriages, and serve as regents if an underage heir ascends to the throne -Subject nationscan be given more specific instructions on how to behave at war -Fetishist nationscan choose from a number of cults, and uncover new options as they wage war and make alliances -Coptic nationswill be tasked with preserving their faith through the control of holy sites throughout the near east. 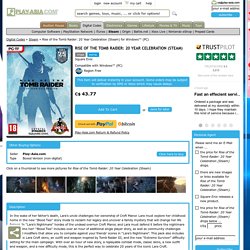 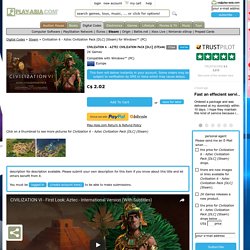 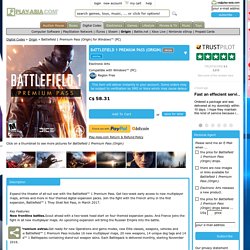 Get two-week early access to new multiplayer maps, armies and more in four themed digital expansion packs. Join the fight with the French army in the first expansion, Battlefield™ 1 They Shall Not Pass, in March 2017. Key Features:New frontline battles.Scout ahead with a two-week head start on four themed expansion packs. And France joins the fight in all new multiplayer maps.

An upcoming expansion will bring the Russian Empire into the battle. Yesterday Origins (Steam) steamdigital. Battlefield 1 (Origin) origindigital. Tyranny [Archon Edition] (Steam) steamdigital. In Tyranny, the grand war between good and evil is over – and the forces of evil, led by Kyros the Overlord, have won. 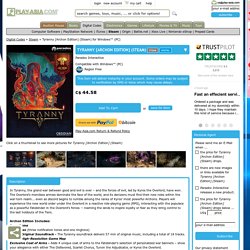 The Overlord’s merciless armies dominate the face of the world, and its denizens must find their new roles within the war-torn realm... even as discord begins to rumble among the ranks of Kyros’ most powerful Archons. Players will experience the new world order under the Overlord in a reactive role-playing game (RPG), interacting with the populace as a powerful Fatebinder in the Overlord’s forces -- roaming the lands to inspire loyalty or fear as they bring control to the last holdouts of the Tiers. Archon Edition Includes:Base GameRingtones (three notification tones and one ringtone)Digital Original Soundtrack - The Tyranny soundtrack delivers 57 min of original music, including a total of 18 tracks. 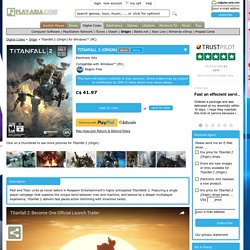 Tyranny [Commander Edition] (Steam) steamdigital. Paradox Interactive Compatible with Windows™ (PC) Region Free This item will deliver instantly in your account. Some orders may be subject to verification by SMS or Voice which may cause delays. description In Tyranny, the grand war between good and evil is over – and the forces of evil, led by Kyros the Overlord, have won. Further info. Husk (Steam) steamdigital. Dishonored 2 (Steam) steamdigital. Game DescriptionReprise your role as a supernatural assassin in Dishonored 2 – the next chapter in the award-winning Dishonored saga by Arkane Studios.

Play your way in a world where mysticism and industry collide. Will you choose to play as Empress Emily Kaldwin or the royal protector, Corvo Attano? Will you make your way through the game unseen, make full use of its brutal combat system, or use a blend of both? How will you combine your character’s unique set of powers, weapons and gadgets to eliminate your enemies? The story responds to your choices, leading to intriguing outcomes, as you play through each of the game’s hand-crafted missions. StoryDishonored 2 is set 15 years after the Lord Regent has been vanquished and the dreaded Rat Plague has passed into history.

Dishonored 2 - Imperial Assassins [DLC] (Steam) steamdigital. Bethesda Compatible with Windows™ (PC) Region Free This item will deliver instantly in your account. Killing Floor 2 (Steam) steamdigital. Tripwire Interactive. Conan Exiles [incl. Early Access] (Steam) steamdigital. You are an exile, outcast and downtrodden, sentenced to walk in a barbaric wasteland where the weak are crushed and only the strong can live. Here you must fight to survive, build, and dominate the world alone on your own server, or with enemies and allies in online multiplayer. Diablo III: Battle Chest battle.netdigital. If you are familiar with Diablo III: Battle Chest, why not let others know? Resident Evil 7: biohazard (Steam) steamdigital. This is the EU Version and may NOT work in other regions. Resident Evil 7 biohazard is the next major entry in the renowned Resident Evil series and sets a new course for the franchise as it leverages its roots and opens the door to a truly terrifying horror experience.

A dramatic new shift for the series to first person view in a photorealistic style powered by Capcom’s new RE Engine, Resident Evil 7 delivers an unprecedented level of immersion that brings the thrilling horror up close and personal. Shadow Tactics: Blades of the Shogun (Steam) steamdigital. Shadow Tactics is a hardcore tactical stealth game set in Japan around the Edo period. Take control of a team of deadly specialists and sneak in the shadows between dozens of enemies. Urban Empire (Steam) steamdigital. In Urban Empire you take control of a mayoral dynasty and lead your city and people through 200 years of history. Establish infrastructures, plan city districts, debate political decisions at the town council, bribe or blackmail your opponents, empower the democratic rights of your people or ignore them and reign supremely by yourself – the decision is yours! Beginning in the 1820s, establish your city through five different eras, each with its own threats and opportunities.

Master the challenges of the centuries, face political struggles, experience world-changing events and pioneering inventions, and create your own unique Urban Empire! Features:- City Ruler, not City Builder:Urban Empire offers a unique combination of classic city building and political management gameplay. Euro Truck Simulator 2: Vive la France! [DLC] (Steam) steamdigital. Dawn of Andromeda [incl. Early Access] (Steam) steamdigital. Find your path to glory! Andromeda has seen quieter days, and it’s up to you to take the reins of one of many civilizations, and guide it through the many hidden dangers in the galaxy. Dawn of Andromeda is a pausable, real-time space 4X game focused on providing a fun, immersive and accessible experience that allows you to truly play as an Emperor. Cities: Skylines - Natural Disasters (Steam) steamdigital. Watch Dogs 2 (Uplay) Uplaydigital. Grand Prix Tickets.

Online Booking of bus and train from. CMMobile Travel SIM. The Ultimate Disney World Savings Guide. N a late Spring afternoon, imagine two families departed for Disney World. They were very much alike, these two families. Both had two children, both had middle class incomes, and both lived in the same neighborhood. Both families took the same flight to Disney World. Both stayed at the same luxury 5-Star Disney World resort. Both families attended the same shows and events, and ate at the same restaurants. Both families spent the same amount of time at Disney World, and returned home on the same flight. But there was a difference…. One family spent $5,500 for their Disney World vacation. What made the difference? Hi – I’m Beth Haworth. I’ve written a guide to the best tips, tricks and savings available for a Disney Vacation. AsianTrails Malaysia : (Kuala Lumpur, Penang, Malacca, Langkawi ...) Copyright 1999-2015 by AsianTrails Ltd. All Rights Reserved Suite 7.01, 7th Floor, Wisma Mirama, Jalan Wisma Putra, 50460 Kuala Lumpur, Tel: +60 3 2141 5245 - Fax: +60 3 2142 5245 E-mail: res@asiantrails.com.my.