Free Love and Women's History: 19th Century and Later. The name "free love" has been given to a variety of movements in history, with different meanings. 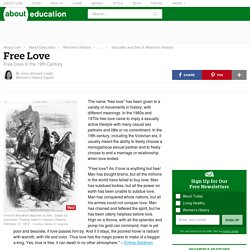 In the 1960s and 1970s free love came to imply a sexually active lifestyle with many casual sex partners and little or no commitment. In the 19th century, including the Victorian era, it usually meant the ability to freely choose a monogamous sexual partner and to freely choose to end a marriage or relationship when love ended. "Free love? Free love - Wikipedia. Free love is a social movement that rejects marriage, which is seen as a form of social and financial bondage. 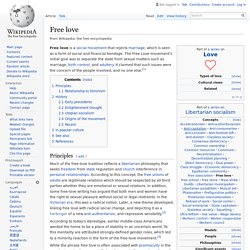 The Free Love movement's initial goal was to separate the state from sexual matters such as marriage, birth control, and adultery. It claimed that such issues were the concern of the people involved, and no one else.[1] Halloffamesterner. Rene Magritte's Son of Man and the Struggle Between Good & Evil by Javin Sterner The first time I saw Rene Magritte’s painting, the Son of Man, I was confused and felt a little mislead. 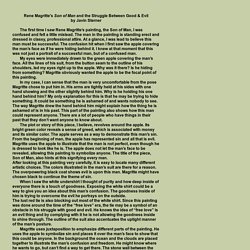 The man in the painting is standing erect and dressed in classy, professional attire. At a glance, I was lead to believe this man must be successful. René Magritte: The artist who turned the world on its head. Arguably, Magritte’s career as an illustrator and designer of publicity material even shaped his vision as an artist. 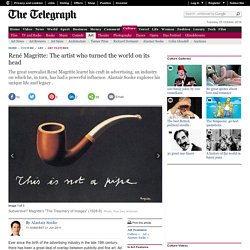 Next week, this theory can be put to the test, when examples of his commercial work will be displayed alongside more than 100 paintings, including masterpieces such as The Menaced Assassin (1927), Time Transfixed (1938), and Golconda (1953), in a new exhibition at Tate Liverpool. Despite winning international acclaim during his thirties, Magritte didn’t become rich until fairly late in his career. As a result, he was obliged to seek work as a commercial artist, so that he and his wife Georgette could live comfortably in their cramped flat in the suburbs of Brussels. Shortly before their marriage in 1922, Magritte accepted a job as a designer at a wallpaper factory – in a bid, as he put it in a letter, “to make Georgette as happy as possible in the calm of a nice steady bourgeois life”.

Symbols and their meaning: the apple. Apples appear in many religions, often as a dangerous or forbidden fruit.It is nevertheless difficult to identify the presence of apples in some religious tradtions, mythologies and stories. 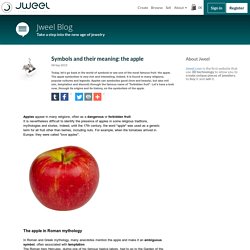 Indeed, until the 17th century, the word "apple" was used as a generic term for all fruit other than berries, including nuts. For example, when the tomatoes arrived in Europe, they were called "love apples". The apple in Roman mythology Venus with an apple - Thorvaldsens museum, Denmark. Forbidden fruit - Wikipedia. Forbidden fruit is a phrase that originates from Genesis concerning Adam and Eve in Genesis 2:16–17. 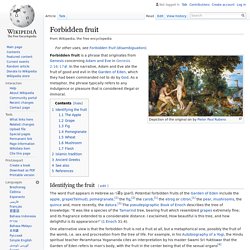 In the narrative, Adam and Eve ate the fruit of good and evil in the Garden of Eden, which they had been commanded not to do by God. As a metaphor, the phrase typically refers to any indulgence or pleasure that is considered illegal or immoral. Identifying the fruit[edit] The word fruit appears in Hebrew as פֶּ֫רִי (pərî). Potential forbidden fruits of the Garden of Eden include the apple, grape(Talmud), pomegranate,[1] the fig,[2] the carob,[1] the etrog or citron,[1] the pear, mushrooms, the quince and, more recently, the datura.[3] The pseudepigraphic Book of Enoch describes the tree of knowledge: "It was like a species of the Tamarind tree, bearing fruit which resembled grapes extremely fine; and its fragrance extended to a considerable distance. What does Rene Magritte's The Son of Man mean? - Quora. Rene Magritte Biography, Art, and Analysis of Works. "Everything we see hides another thing, we always want to see what is hidden by what we see. 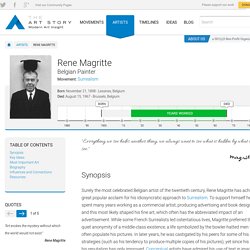 " Synopsis Surely the most celebrated Belgian artist of the twentieth century, Rene Magritte has achieved great popular acclaim for his idiosyncratic approach to Surrealism. To support himself he spent many years working as a commercial artist, producing advertising and book designs, and this most likely shaped his fine art, which often has the abbreviated impact of an advertisement. While some French Surrealists led ostentatious lives, Magritte preferred the quiet anonymity of a middle-class existence, a life symbolized by the bowler-hatted men that often populate his pictures.

If Jesus was the Son of God, why did He call Himself the Son of Man? See this page in: Albanian, Bulgarian, Indonesian, Spanish This sounds like some kind of contradiction at first glance, but in fact there is no contradiction. 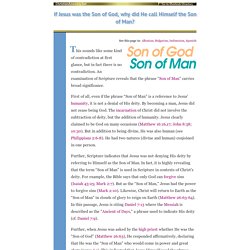 An examination of Scripture reveals that the phrase “Son of Man” carries broad significance. First of all, even if the phrase “Son of Man” is a reference to Jesus' humanity, it is not a denial of His deity. By becoming a man, Jesus did not cease being God. The incarnation of Christ did not involve the subtraction of deity, but the addition of humanity. 10 Things You Might Not Know About ‘The Son of Man’ Belgian painter Rene Magritte forged a reputation for wit and whimsy, but none of his works captured the world’s imagination as intensely as The Son of Man. 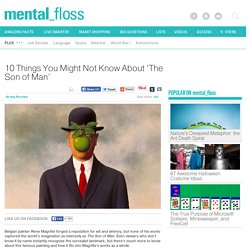 Even viewers who don't know it by name instantly recognize the surrealist landmark, but there's much more to know about this famous painting and how it fits into Magritte's works as a whole. 1. The Son of Man is a self portrait. The man behind that floating apple and beneath that bowler is none other than Magritte. If you look closely, you can see his eyes peeking out between the apple and its leaves.