Sports action camera - VSN Mobil. How can I edit Ricoh Theta 360 videos? I guess I'm not totally finished with this topic. 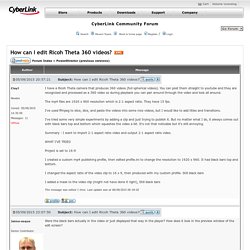 The Ricoh Theta was designed as a still camera, but it’s still the best consumer product on the market for making spherical video. 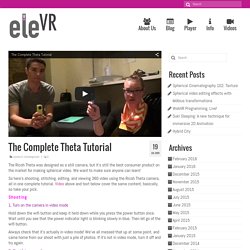 We want to make sure anyone can learn! So here’s shooting, stitching, editing, and viewing 360 video using the Ricoh Theta camera, all in one complete tutorial. Video above and text below cover the same content, basically, so take your pick. Shooting 1. Hold down the wifi button and keep it held down while you press the power button once. On the street: Capturing and editing 360 video with the Theta S. <div>You must enable Javascript to watch this video! 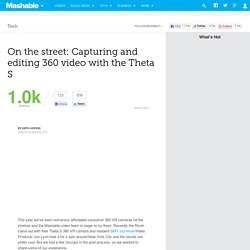 </div> This year we've seen numerous affordable consumer 360 VR cameras hit the shelves and the Mashable video team is eager to try them. Recently the Ricoh came out with their Theta S 360 VR camera and resident BMX stuntman/Video Producer Jon Lynn took it for a spin around New York City and the results are pretty cool. But we had a few hiccups in the post process, so we wanted to share some of our experience. Say you've recorded an awesome day out with your friends and want to share it with the world. The desktop app does not like these files. From here you can view them in the Theta app in 360. Now that your footage is in your app you can watch it. (My own preference for pulling photos and video off of my iPhone is Mac's built in Image Capture utility.

You can upload your raw clips to YouTube and the player recognizes these as a 360 video. Now onto editing the footage. Free VR Tools & Software. Use the offset method with a 360-degree panoramic photo Panoramic Photos. - Let's move into After Effects and start to use some of these 360 degree panoramics to make some motion graphics. 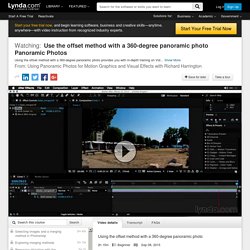 To start, we'll do something easy. We're going to revisit that offset command, and use a 360 pano to make a looping background. To begin, I've launched After Effects, and I'll simply import a 360 degree pano into the project. This one is from the city of Zadar in Croatia, and it's a pretty large file of an environment. What I'm going to do is make a new composition so I'll click the New Comp icon, and choose a Preset. In this case, I'll stick with HDTV 1080, but Im going to deliver at 23.98, and click OK. How to Create a 3D Virtual Reality Video With After Effects - Envato Tuts+ 3D & Motion Graphics Tutorial. Autopano Video Features. How to Shoot, Edit, and Upload 360-Degree Videos. 360-degree videos have now been released to the masses via YouTube and Facebook. 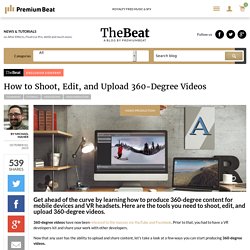 Prior to that, you had to have a VR developers kit and share your work with other developers. Now that any user has the ability to upload and share content, let’s take a look at a few ways you can start producing 360-degree videos. 360-Degree Cameras and Rigs As this is a developing technology, there are a ton of options available and in development. If you are planning on purchasing a single camera, you should note that only some sites can host your video. Sometimes A Good GoPro Gimbal Is All You Need (A Review With A Chicken) CHRISTIAN-TAEUBER-GALLERY, 3D SERVICE,3D Galerie, 3D Videos, 3D Produktion, 3D Photography. 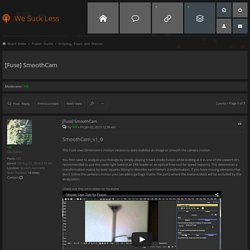 You first need to analyze your footage by simply playing it back inside Fusion while looking at it in one of the viewers (it's recommended to put this node right behind an EXR loader or an optical flow tool for speed reasons). This determines a transformation matrix by least squares fitting to describe each frame's transformation. If you have moving elements that don't follow the camera's motion you can add a garbage matte. The parts where the matte is black will be excluded by the analyzation. Hague MMC-SPM Mini Motion Cam Steadicam Stabilizer With Smart Phone Mount — Hague Camera Supports. The most important part of a stabilizer is its gimble as it essential that the handle is totally free moving. 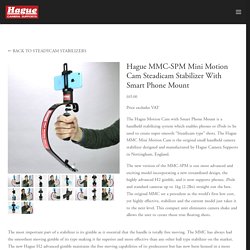 The MMC has always had the smoothest moving gimble of its type making it far superior and more effective than any other ball type stabilizer on the market. The new Hague H2 advanced gimble maintains the free moving capabilities of its predecessor but has now been housed in a more secure socket which prevents the risk of the handle becoming loose if misused. The gimble has a highly polished ball enclosed in a nylon socket ensuring super free movement and enhanced security. The MMC stabilizer now supports cameras from 300g (0.7lbs) – 1kg (2.2lbs) as standard straight out the box and this version is supplied with the SPM Smart Phone Mount which allows phones and iPods to be used on the stabilizer. Cameras below 300g (0.7lbs) or above 1kg (2.2lbs) can also be balanced with the additional accessories offered. 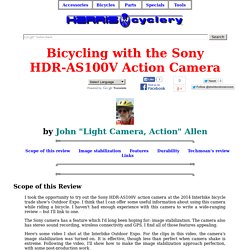 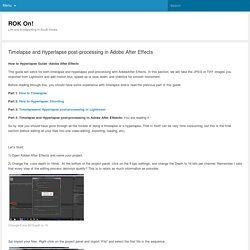 In this section, we will take the JPEG or TiFF images you exported from Lightroom and add motion blur, speed up or slow down, and stabilize for smooth movement. Smooth operators. Understanding Adobe Premiere's Warp Stabilizer. — Story & Heart Blog. Be it MoVI, handheld, slider, or even monopod: sometimes you just need the helping hand of modern day post-production to make a rock-solid shot rock-solid steady. 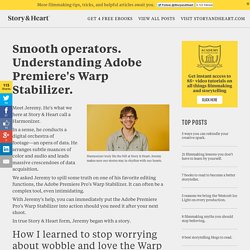 Luckily, Jeremy Bircher over at the soon-to-launch story-driven stock footage hub, Story & Heart, has offered up the most comprehensive breakdown of Warp Stabilizer yet. Check it out. Deshaker - video stabilizer. Installation Download Deshaker using either link below and place the vdf file in the VirtualDub plugin directory and (re)start VirtualDub. Deshaker 32-bit (for 32-bit VirtualDub on any Windows) Deshaker 64-bit (for 64-bit VirtualDub on 64-bit Windows) (Keep in mind that many codecs etc. are 32-bit only and those can't be used in 64-bit VirtualDub. But 64-bit Deshaker will let you use all available memory, which comes in handy for the memory hungry Previous and future frames to fill in borders option.

Time-stretching and time-remapping. When remapping time in the Graph Editor, use the values represented in the Time Remap graph to determine and control which frame of the movie plays at which point in time. Each Time Remap keyframe has a time value associated with it that corresponds to a specific frame in the layer; this value is represented vertically on the Time Remap value graph. When you enable time remapping for a layer, After Effects adds a Time Remap keyframe at the start and end points of the layer. These initial Time Remap keyframes have vertical time values equal to their horizontal position on the timeline. By setting additional Time Remap keyframes, you can create complex motion results. Using Warp Stabilizer in Premiere Pro CS6. Share this Episode Please select a language: Autoplay End of Video Show End Screen Default Quality Adjust your embed size below, then copy and paste the embed code above.