Digitaltrends. New Material Can Scrub Carbon Dioxide Right Out of the Air at Unprecedented Rates. If cleaning carbon dioxide from the atmosphere was easy, we'd already be doing it. 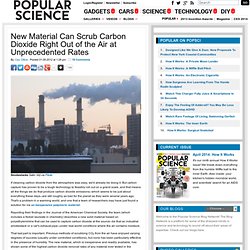 But carbon capture has proven to be a tough technology to feasibly roll out on a grand scale, and that means all the things we do that produce carbon dioxide emissions--which seems to be just about everything these days--are still roughly as bad for the planet as they were several years ago. That's a problem in a warming world, and one that a team of researchers may have just found a solution for via an inexpensive polymeric material. Reporting their findings in the Journal of the American Chemical Society, the team (which includes a Nobel laureate in chemistry) descirbes a new solid material based on polyethylenimine that can be used to capture carbon dioxide at the source--be that an industrial smokestack or a car's exhaust pipe--under real-world conditions where the air contains moisture. That last part is important. It's also reusable. [Science Daily] Inside the World's Largest Fusion Reactor. The well-publicized failures of cold fusion may have tainted the field's reputation, but physicists have been successfully joining nuclei with hot fusion since 1932. 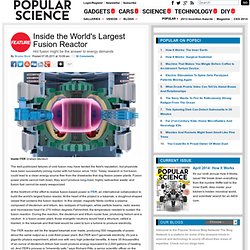 Today, research in hot fusion could lead to a clean energy source free from the drawbacks that dog fission power plants. Fusion power plants cannot melt down; they won't produce long-lived, highly radioactive waste; and fusion fuel cannot be easily weaponized. At the forefront of the effort to realize fusion-based power is ITER, an international collaboration to build the world's largest fusion reactor. At the heart of the project is a tokamak, a doughnut-shaped vessel that contains the fusion reaction.

In this vessel, magnetic fields confine a plasma composed of deuterium and tritium, two isotopes of hydrogen, while particle beams, radio waves and microwaves heat it to 270 million degrees Fahrenheit, the temperature needed to sustain the fusion reaction. ITER will begin experiments in 2019 in France. Fuel Plasma Heat Lining. The Last Drops: How to Bridge the Gap Between Oil and Green Energy. For all our talk of an online future unbounded by physical limits, life in our increasingly global economy still requires the movement of actual people and things, often over long distances. 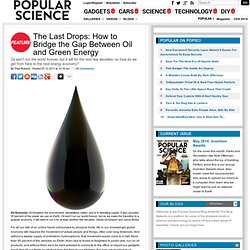 And without a steady supply of prehistoric hydrocarbons, that movement would come to a halt. More than 95 percent of the vehicles on Earth--from cars to trucks to freighters to jumbo jets--run on oil products, and without them we'd be hard-pressed to commute to the office or import our gadgets, much less till our fields or get food from the farm to our kitchens. For now, we must have oil.

Paint Your Roof With Working Solar Cells Made from Grass Clippings. Installing a solar roof on your home could one day be as simple as mixing your yard clippings into a stew of inexpensive chemicals and painting the resulting mixture right onto your rooftop. 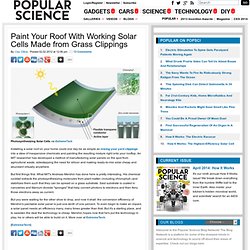 An MIT researcher has developed a method of manufacturing solar panels on the spot from agricultural waste, sidestepping the need for silicon and making ready-to-mix solar cheap and abundant virtually anywhere. But first things first. What MIT's Andreas Mershin has done here is pretty interesting. His chemical cocktail extracts the photosynthesizing molecules from plant matter--including chlorophyll--and stabilizes them such that they can be spread on a glass substrate. Said substrate is coated in nanowires and titanium dioxide "sponges" that help convert photons to electrons and then ferry those electrons away as current.

But you were waiting for the other shoe to drop, and now it shall: the conversion efficiency of Mershin's paintable solar panel is just one-tenth of one percent. [ExtremeTech] Concepts & Prototypes: Two Next-Gen Nukes. In the aftermath of the Fukushima disaster in March, the appetite for new nuclear power plants slipped to post-Chernobyl lows. 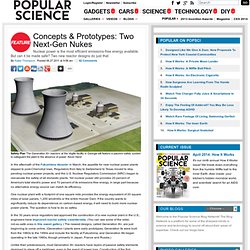 Regulators from Italy to Switzerland to Texas moved to stop pending nuclear-power projects, and the U.S. Nuclear Regulatory Commission (NRC) began to reevaluate the safety of all domestic plants. Yet nuclear power still provides 20 percent of America's total electric power and 70 percent of its emissions-free energy, in large part because no alternative energy source can match its efficiency. One nuclear plant with a footprint of one square mile provides the energy equivalent of 20 square miles of solar panels, 1,200 windmills or the entire Hoover Dam. If the country wants to significantly reduce its dependence on carbon-based energy, it will need to build more nuclear power plants. In the 30 years since regulators last approved the construction of a new nuclear plant in the U.S., engineers have improved reactor safety considerably.