Book of Mormon distributed outside musical of same name. Theater-goers headed into the Marcus Center for the Performing Arts this week don't quite know what to make of the Mormons doling out copies of the Book of Mormon outside "The Book of Mormon. 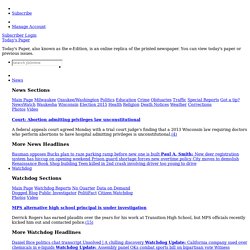 " Some eagerly accept. Others look away and laugh. Some offer a curt "no thank you," and keep on moving. "A lot of people think we're part of the cast," said Elder Ryan Haueter, 20, of Utah, whose soft, boyish face defies the honorific bestowed on missionaries in the Church of Jesus Christ of Latter-day Saints. They are not, in fact, part of the cast. "I think the play is great," said 21-year-old Zac Hadlock of New Mexico, as he handed out books, and cards with the LDS mobile apps, outside the Marcus Center on Wednesday night. The touring production of "Book of Mormon," by the folks who brought us "South Park" and "Avenue Q," winds up a two-week engagement at the Marcus Center this weekend. None of the young men owned up to seeing the show. They don't appear to take offense. Same-Gender Attraction. Same-Gender Attraction - Ensign Oct. 1995. God created us male and female. 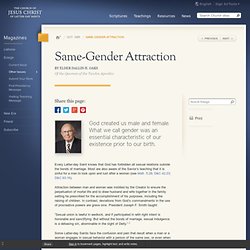 What we call gender was an essential characteristic of our existence prior to our birth. Every Latter-day Saint knows that God has forbidden all sexual relations outside the bonds of marriage. Most are also aware of the Savior’s teaching that it is sinful for a man to look upon and lust after a woman (see Matt. 5:28; D&C 42:23; D&C 63:16).

Attraction between man and woman was instilled by the Creator to ensure the perpetuation of mortal life and to draw husband and wife together in the family setting he prescribed for the accomplishment of his purposes, including the raising of children. In contrast, deviations from God’s commandments in the use of procreative powers are grave sins. “Sexual union is lawful in wedlock, and if participated in with right intent is honorable and sanctifying. Gospel Doctrines Our attitudes toward these questions are dictated by gospel doctrines we know to be true. Stephen Mansfield: The Mormonizing of America. There are nearly seven million Mormons in America. 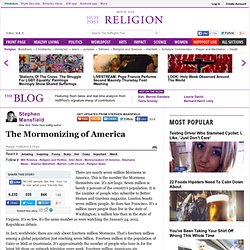 This is the number the Mormons themselves use. It's not huge. Seven million is barely 2 percent of the country's population. It is the number of people who subscribe to Better Homes and Gardens magazine. London boasts seven million people. In fact, worldwide, there are only about fourteen million Mormons. Seek by Deseret Book. ““What we lacked in space we made up for in excitement. 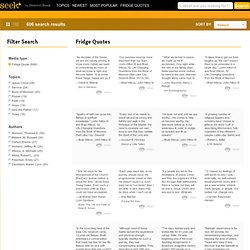 One night while the rest of our family slept, Nada washed some clothes by hand in the sink. She had brought along some rope to fashion a clothesline just in case. With square footage at a premium, she crawled over the air mattress, across the bed, over a stack of luggage, and through a window to reach an adjoining roof. The handy, flat surface was walled by towering buildings on all sides. As she was tying her clothesline, an armed SWAT team descended upon her and her laundry suddenly out of the darkness in full force like ninja warriors. (John Stockton and Kerry L. John Stockton, Kerry L. Seek by Deseret Book. Mormon.org. Leave It Alone - New Era Jan. 1995 - new-era. Taken from an address delivered in October 1993 general conference. 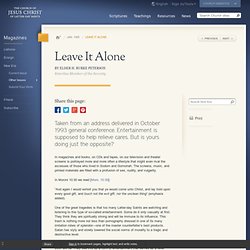 Entertainment is supposed to help relieve cares. But is yours doing just the opposite? In magazines and books, on CDs and tapes, on our television and theater screens is portrayed more and more often a lifestyle that might even rival the excesses of those who lived in Sodom and Gomorrah. The screens, music, and printed materials are filled with a profusion of sex, nudity, and vulgarity. In Moroni 10:30 we read [Moro. 10:30]: “And again I would exhort you that ye would come unto Christ, and lay hold upon every good gift, and touch not the evil gift, nor the unclean thing” (emphasis added).

One of the great tragedies is that too many Latter-day Saints are watching and listening to this type of so-called entertainment. Part of the tragedy I speak of is that many do not recognize they are trapped or soon will be. We must come to understand fully the consequences of having an appetite for such entertainment.