C Enumeration (Enum): Examples and Where it is used? Difference between C and Embedded C. Key difference: C is a type of computer programming language. 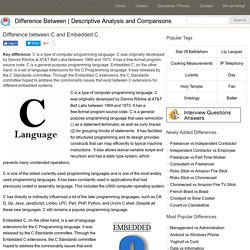 C was originally developed by Dennis Ritchie at AT&T Bell Labs between 1969 and 1973. It has a free-format program source code. Split a string into two based on char location. The C Book — Const and volatile. Embedded systems - Writing generic code when your target is a C compiler - Software Engineering Stack Exchange. The best way to handle this is to actually write your algorithms in a language independent pseudo code. 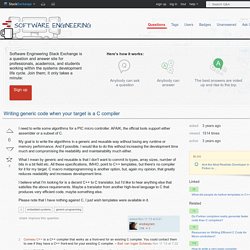 Then, you can create a reference implementation in a language of choice, like C, carefully noting the edge cases that make this implementation tied to a particular memory model, data type model, byte sizes, bit handling capabilities, loop exit conditions weirdness ( think floating point ) types size overflow, etc. etc. The reason this is a good strategy is that you will never achieve true portability with any known set of language tools, compilers, cross compilers, diagramers, prototypers.

It is just not truly tractable. Once you have created a few reference implementations, ideally in very diverse languages ( think Lisp or Prolog ) you will be able to more fully identify, understand and anticipate how your code will adapt to different platforms; and learn how to write pseudo code, move carefully toward an implementation and track the edge cases and dependencies. Function overloading in C.

C strcmp() The strcmp() function compares two strings and returns 0 if both strings are identical. 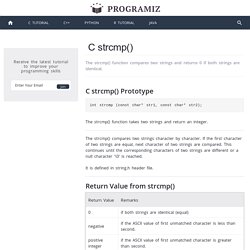 C - socket connect() vs bind() Combining 4 bytes into one long int. 4 byte to float conversion. How to pass ENUM as function argument in C. How to round off Float to 2 decimal places ATmega16 iar work. Floating point - Rounding Number to 2 Decimal Places in C. Return array from function in C. C programming does not allow to return an entire array as an argument to a function. 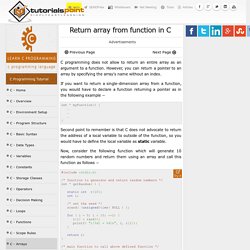 However, you can return a pointer to an array by specifying the array's name without an index. If you want to return a single-dimension array from a function, you would have to declare a function returning a pointer as in the following example − int * myFunction() { . . .} Second point to remember is that C does not advocate to return the address of a local variable to outside of the function, so you would have to define the local variable as static variable. Now, consider the following function which will generate 10 random numbers and return them using an array and call this function as follows − When the above code is compiled together and executed, it produces the following result − 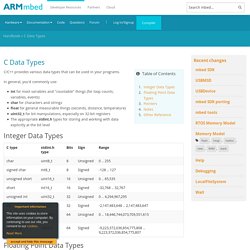 In general, you'd commonly use: int for most variables and "countable" things (for loop counts, variables, events) char for characters and strings float for general measurable things (seconds, distance, temperature) uint32_t for bit manipulations, especially on 32-bit registers The appropriate stdint.h types for storing and working with data explicitly at the bit level. How do I use extern to share variables between source files in C? C Enumeration (Enum): Examples and Where it is used? C Memory Allocation Using malloc(), calloc(), free() & realloc()

In C, the exact size of array is unknown until compile time, i.e., the time when a compiler compiles your code into a computer understandable language. 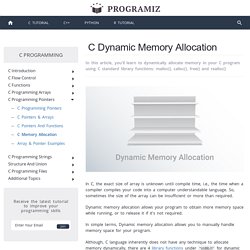