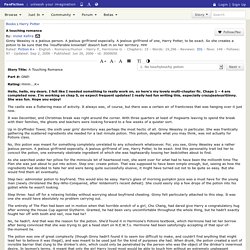 Rating: Hmm….K+ Hello, hello, my dears. I felt like I needed something to really work on, so here's my lovely multi-chapter fic. Chaps 1 – 4 are completed now. The castle was a fluttering mass of activity. It was December, and Christmas break was right around the corner. Up in Gryffindor Tower, the sixth year girls' dormitory was perhaps the most hectic of all. No, this potion was meant for something completely unrelated to any schoolwork whatsoever. As she searched under her pillow for the miniscule bit of heartwood root, she went over for what had to have been the millionth time The Plan she was just about to put into action.

Step two: administer potion to boyfriend. Step three: haul off for a relaxing holiday without worrying about boyfriend cheating. The entirety of The Plan had been set in motion when that horrible wretch of a girl, Cho Chang, had dared give Harry a congratulatory hug after winning the House Cup against Slytherin. YAY! Welcome to Hogwarts Chapter 1: Your Parents Didn't Die in a Car Crash, a harry potter fanfic. Author's Note: Hey guys! 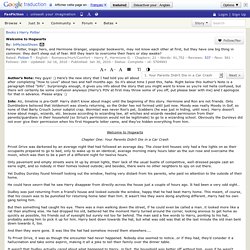 :) Here's the new story that I had told you all about after completing "How to Love" about two and half months ago. So it's about time I post this, haha. Right below this Author's Note is a paragraph titled "Info". Surprisingly enough, it gives you info about the story that you might want to know so you're not hella confused, but there will certainly be some confusion anyways (Harry's POV at first may throw some of you off, put please bear with me) and I apologize for that in advance. Weary Wizard, a harry potter fanfic.

Disclaimer: I do not own the Harry Potter universe. 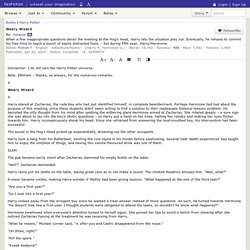 Beta: Ethiliam – thanks, as always, for the numerous remarks. Weary Wizard Harry stared at Zacharias, the rude boy who had just identified himself, in complete bewilderment. Perhaps Hermione had lied about the purpose of this meeting, since these students didn't seem willing to find a solution to their inadequate Defence-lessons problem. He banished the silly thought from his mind after spotting the withering glare Hermione aimed at Zacharias. The sound in the Hog's Head picked up exponentially, drowning out the other occupants. HP & Marcia the Complete Story Chapter 1, a harry potter fanfic. Harry and Marcia Disclaimer: Any character, physical place, or magic you recognize from Harry Potter books or movies belong to Joanne "Jo" Rowling and/or anyone she has granted a license too. 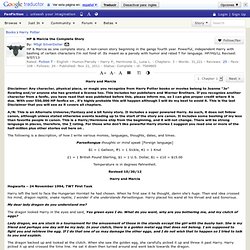 Coming Back Chapter 1: Part 1 Discovery, a harry potter fanfic. Disclaimer The Harry Potter universe and all the characters in it belong to J. 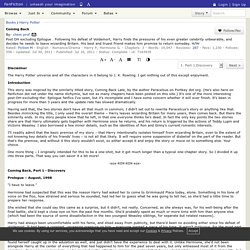 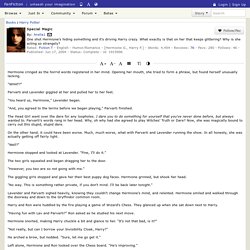 Opening her mouth, she tried to form a phrase, but found herself unusually lacking. Parvarti and Lavender giggled at her and pulled her to her feet. "You heard us, Hermione," Lavender began. "And, you agreed to the terms before we began playing," Parvarti finished. The Head Girl went over the dare for any loopholes. On the other hand, it could have been worse. "Well? " Hermione stopped and looked at Lavender. The two girls squealed and began dragging her to the door. "However, you two are so not going with me. " The Wingman Chapter 1: The Decision, a harry potter fanfic. Hiya ya'll! 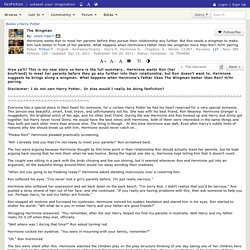 This is my new story so here is the full summary… Hermione wants Ron (her boyfriend) to meet her parents before they go any further into their relationship, but Ron doesn't want to. Hermione suggests he brings along a wingman. What happens when Hermione's father likes The Wingman better than Ron? Broken Chains Chapter 1: Cruel to be Kind, a Star Wars + Harry Potter Crossover fanfic. Broken Chains A Harry Potter/Star Wars Crossover. 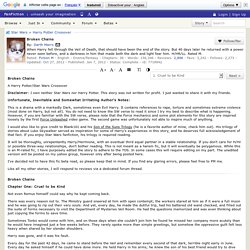 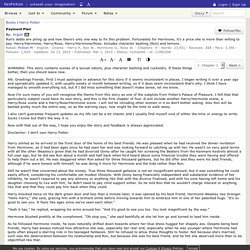 If these things bother, then you should leave now. AN: Greetings friends. First I must apologise in advance for this story if it seems inconsistent in places. I began writing it over a year ago and sporadically updated it, with usually weeks or month between writing, so if it does seem inconsistent that's why. I think I have managed to smooth everything out, but if I did miss something that doesn't make sense, let me know. Now I'm sure many of you will recognise the theme from this story as one of the subplots from Potter's Palace of Pleasure. I also can't guarantee frequent updates as my life can be a bit chaotic and I usually find myself void of either the time or energy to write. Now with that out of the way, I hope you enjoy the story and feedback is always appreciated. Fleur's Surprise Chapter 1 Surprise, a harry potter fanfic. Warning: Includes scenes of sexual nature. 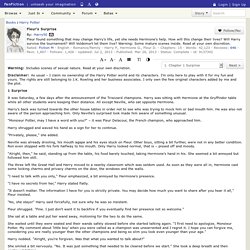 Read at your own discretion. Disclaimer: As usual – I claim no ownership of the Harry Potter world and its characters. I'm only here to play with it for my fun and yours. The rights are still belonging to J.K. Harry Potter: The Forgotten Brother Ch 1, Harry Potter. No, I do not own the Harry Potter franchise, though I do own copies of all the books and films. The people who do own the Harry Potter franchise are JK Rowling, Bloomsbury, Warner Bros. and a few other publishers. Thank you to JKR for letting us play about in the sandbox of the Wizarding World. Cold blood Chapter 1: A bad day, a harry potter fanfic. Disclaimer: My house belongs to the bank, my work belongs to my boss and my money is always confiscated by my wife. And Harry Potter belongs to JK Rowling... Damn... Cold blood By LaCroix Intro - A bad day.

260 Going on 16 Chapter 1, a harry potter fanfic. 260 Going on 16 By SciFiFantasyWriter1 Disclaimer: I own nothing of any recognized characters or universes within. Hermione Granger is played by Emma Watson. Harmony. HP. HP/HG.