Elves, Ethics & The Digital World. (1) YouTube’s Discriminatory New Policies are Destroying our Mission of Inclusion (We Need Your Help) YouTube’s big problem has always been its algorithm, not kids programming. If you type in words like “spider-man”, “elsa”, “hulk” or even “superheroes” into YouTube, it’s safe to assume that the majority of content the video site’s algorithm serves up is probably decent. 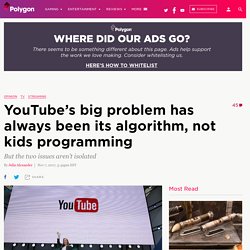 Give the algorithm too much room to breathe, however, and you might fall down a disturbing, sometimes traumatizing hole of YouTube’s darker content, created by trolls and pranksters, but geared toward millions of children. A critical essay from writer James Bridle and a scathing report in The New York Times that investigated how much questionable and traumatizing child-oriented programming is on YouTube brought those issues to light this week.

In his Medium post, Bridle used various examples to prove his point in a lengthy and revelatory piece about how YouTube’s system is failing millions of children who watch content their parents assume to be appropriate. YouTube user says 'pedophile ring' commenting on videos of kids. YouTube and companies that advertise with it are coming under fire after one of the video-sharing site’s users showed how the platform can apparently be used to bolster child exploitation. 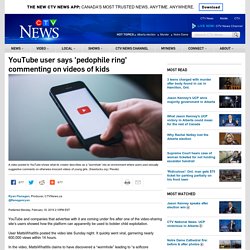 User MattsWhatItIs posted the video late Sunday night. It quickly went viral, garnering nearly 600,000 views within 14 hours. In the video, MattsWhatItIs claims to have discovered a “wormhole” leading to “a softcore pedophile ring.” He says that after starting a new YouTube account unconnected to any of his previous browsing history, it takes him only a few moments of searching and surfing to get from the YouTube homepage to one of many seemingly innocuous videos that have nonetheless racked up unusually high view totals and comment counts.

The videos typically feature young girls engaged in activities such as yoga, gymnastics or other day-to-day activities. The comments often include timestamps linking users’ messages to a specific moment in the video. Mpanies pull adverts from YouTube after 'paedophile ring' exposed. YouTube paedophile ring that comments on 'sexualised' videos of children with millions of views exposed as advertisers pull their adverts from the site US vlogger says he has found a 'wormhole' into a 'paedophile ring' on YouTubeVideos of children appear next to adverts from high profile companies, he saidFirms including Nestle and the makers of Fortnite have pulled adverts from site By Afp and Julian Robinson for MailOnline Published: 07:23 EDT, 21 February 2019 | Updated: 11:57 EDT, 21 February 2019. 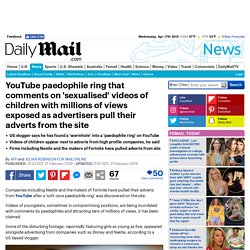 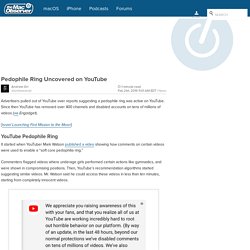 Since then YouTube has removed over 400 channels and disabled accounts on tens of millions of videos (via Engadget). [Israel Launching First Mission to the Moon] It started when YouTuber Mark Watson published a video showing how comments on certain videos were used to enable a “soft core pedophilia ring.” Commenters flagged videos where underage girls performed certain actions like gymnastics, and were shown in compromising positions. (1) Youtube Copyright Disaster! Angry Rant. (1) YouTube Copyright Basics. PewDiePie Finally Responds to Twitch Streamer Alinity Over Copyright Strike Scandal. The on going feud between the most subscriber YouTuber, Felix "PewDiePie" Kjellberg and Twitch streamer Alinity may finally be settled, after PewDiePie addressed the situation. 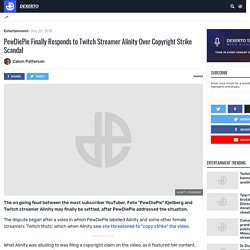 The dispute began after a video in which PewDiePie labelled Alinity and some other female streamers 'Twitch thots', which when Alinity saw she threatened to "copy strike" the video. Alinity even bragged of the money she would receive from these claims, amounting to "$700 last month". Of course, many of these claims are not legitimate, and are making claims on videos protected under fair use.

YouTube creators are permitted to include content from others, provided it is 'transformative', meaning they provide commentary, criticism, review or reaction to the content. Alinity was heavily criticized for her open engagement in these copyright claims, some of which targeted small channels unable to fight the claim effectively. MrBeast calls out YouTube after being hit with false copyright strike. Popular YouTuber Jimmy ‘MrBeast’ Donaldson uploaded a video to Twitter on February 11, where he bemoaned the current state of YouTube’s Content ID system. 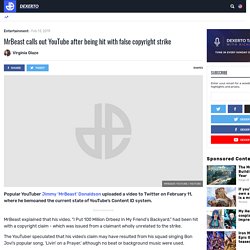 MrBeast explained that his video, “I Put 100 Million Orbeez In My Friend's Backyard,” had been hit with a copyright claim - which was issued from a claimant wholly unrelated to the strike. The YouTuber speculated that his video’s claim may have resulted from his squad singing Bon Jovi’s popular song, ‘Livin' on a Prayer,’ although no beat or background music were used. Additionally, the claim had been issued for using a song by ‘Pascal Landguirand,’ a Canadian musician of duo ‘Trans-X’ known for their popular 1983 hit ‘Living On.’ Read More: PewDiePie lashes out at YouTuber JustDestiny for using underage girls in thumbnails. How Content ID works - YouTube Help. Copyright strike basics - YouTube Help. Top 10 Reasons Why YouTube's Copyright System is Broken. 1Anyone can submit a false copyright claim/strike and screw over other content creators It's called demonetization for a reason. 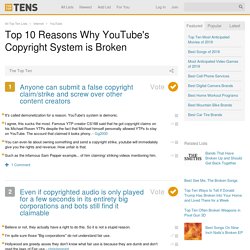 YouTube's system is demonic. I agree, this sucks the most. Famous YTP creator CS188 said that he got copyright claims on his Michael Rosen YTPs despite the fact that Michael himself personally allowed YTPs to stay on YouTube. The account that claimed it looks phony. - Gg2000+3 You can even lie about owning something and send a copyright strike, youtube will immediately give you the rights and revenue. Such as the infamous Sam Pepper example... of him claiming/ striking videos mentioning him.+5 V 1 CommentVoteE 2Even if copyrighted audio is only played for a few seconds in its entirety big corporations and bots still find it claimable Believe or not, they actually have a right to do this.

I'm quite sure those "Big corporations" do not understand fair use.+7 *Not in It's Entireity* Another typo.+4 VoteE 3Half of the claims/strikes are either false or submitted by bots.