Ask The Vet: theme questions (pigeon herpes virus) Occasionally, we will select some very interesting questions and answers concerning a certain topic (disease, medicin, etc.) and publish them on our homepage. 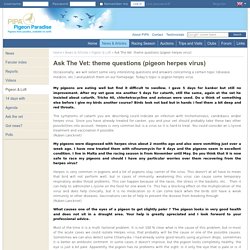 Today's topic is pigeon herpes virus. My pigeons are eating well but find it difficult to swollow. I gave 5 days for kanker but still no improvement. After my vet gave me another 5 days for catarth, still the same, again at the vet he insisted about catarth. Tricho 40, chlortetracycline and aviosan were used. The symptoms of catarrh you are describing could indicate an infection with trichomoniasis, candidiasis and/or herpes virus. My pigeons were diagnosed with herpes virus about 2 months ago and also were vomitting just over a week ago. Chevita GmbH - Infectious catarrh. Infectious Catarrh Diseases of the respiratory tract are very often mixed infections. 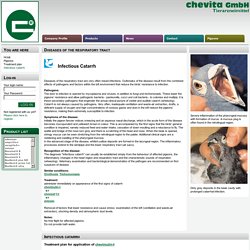 Outbreaks of the disease result from the combined effects of pathogens and factors within the loft environment that reduce the birds’ resistance to infection. Pathogens:The door to infection is opened by mycoplasma and viruses, in addition to fungi und trichomonads. These lower the pigeons’ resistance and allow pathogenic bacteria - pasteurella, cocci und coli bacteria - to colonise and multiply.

It is these secondary pathogens that engender the actual clinical picture of visible and audible catarrh (wheezing).Catarrh is not always caused by pathogens. Symptoms of the disease:Initially the pigeon fancier notices sneezing and an aqueous nasal discharge, which in the acute form of the disease becomes mucopurulent and yellowish brown in colour. Similar conditions:Ornithosis, Trichomoniasis.

Treatment:administer immediately on appearance of the first signs of catarrh chevimulin-t or chevicet®-t or aviosan. Pigeon Herpes Virus. Pigeon Herpes Virus By Clint Robertson I had been breeding and showing pigeons since the late 1970s when in 1995 I acquired a group of birds from the southern to add to my program. 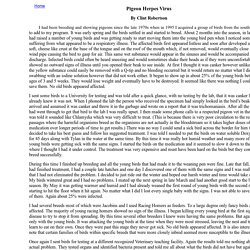 It was early spring and the birds settled in and started to breed. About 2 months into the season, in late May, I had raised a number of young birds and was getting ready to start moving them into the young bird pen when I noticed some of them suffering from what appeared to be a respiratory illness. The affected birds first appeared listless and soon after developed a yellow, soft, cheese like crust at the base of the tongue and on the roof of the mouth which, if not removed, would eventually close off the wind pipe causing the bird to gasp for air. I sent some birds to a University for testing and was told after a quick glance, with no testing by the lab, that it was canker however I already knew it was not.

I had several breeds most of which were Jacobins and I used Racing Homers as feeders. Latency of Pigeon Herpesvirus 1 (PHV1) Pigeon herpesvirus 1 (PHVl) infection induces lesions in the upper digestive and respiratory tracts. 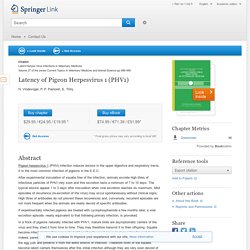 It is the most common infection of pigeons in the E.E.C. After experimental inoculation of squabs free of the infection, animals excrete high titres of infectious particles of PHVl very soon and this excretion lasts a minimum of 7 to 10 days. The typical lesions appear 1 to 3 days after inoculation when viral excretion reaches its maximum. Mild episodes of recurrence (re-excretion of the virus) may occur spontaneously without clinical signs. High titres of antibodies do not prevent these recurrences and, conversely, recurrent episodes are not more frequent when the animals are nearly devoid of specific antibodies.

If experimentally infected pigeons are treated with cyclophosphamide a few months later, a viral excretion episode, nearly equivalent to that following primary infection, is provoked. A strain of PHV1 has been attenuated by 100 passages on chicken embryo fibroblasts. Herpesvirus. Herpesvirus Blood tests on pigeons establish that the half of the birds have antibodies against the herpes virus. 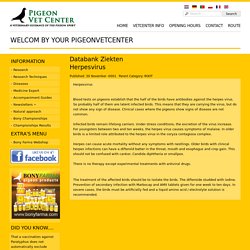 So probably half of them are latent infected birds. This means that they are carrying the virus, but do not show any sign of disease. Clinical cases where the pigeons show signs of disease are not common. Infected birds remain lifelong carriers. Herpes can cause acute mortality without any symptoms with nestlings. There is no therapy except experimental treatments with antiviral drugs. Blue Heaven Loft - weblog Michel Vanlint (English) About two months ago, we had a visitor of an experienced scientist, a professional on the area of ornithose and viruses. 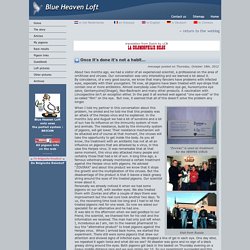 Our conversation was very interesting and we learned a lot about it. By coincidence, of a very good source, we know that many fanciers have problems with infected eyes, especially with their youngsters. Till now, all pigeons have been treated with eye-drops that contain one or more antibiotics. Almost everybody uses Fucithalmic eye gel, Aureomycine eye salve, Gentamycine(Clinagel), Neo-Bacitracin and many other products. A vaccination with Lincospectine isn’t an exception either. When I told my partner in this conversation about this problem, he smiled and he told me that this probably was an attack of the Herpes virus and he explained. We became more active again. Have a nice day, stay well and healthy. Your servant.