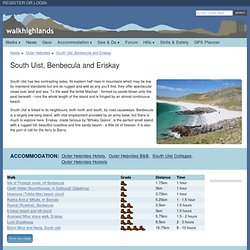 Its eastern half rises in mountains which may be low by mainland standards but are as rugged and wild as any you'll find, they offer spectacular views over land and sea. To the west the fertile Machair - formed by sands blown onto the peat beneath - runs the whole length of the island and is fringed by an almost continuous beach. South Uist is linked to its neighbours, both north and south, by road causeways. Benbecula is a largely low-lying island, with vital employment provided by an army base, but there is much to explore here. Eriskay, made famous by 'Whisky Galore', is the perfect small island, with a rugged hill, beautiful coastline and fine sandy beach - a little bit of heaven. Cladh Hallan. Mike Parker Pearson, Peter Marshall, Jacqui Mulville and Helen Smith South Uist's machair was densely populated in prehistory, from around 2000 BC until the end of the Viking period around AD 1300. 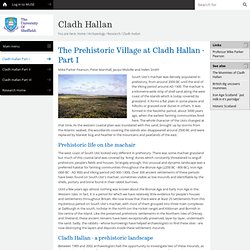 The machair is a kilometre-wide strip of shell sand along the west coast of the islands which is today covered by grassland. It forms a flat plain in some places and hillocks or grassed-over dunes in others. It was formed in the Neolithic period, about 5000 years ago, when the earliest farming communities lived here.

The whole character of the Uists changed at that time. Prehistoric life on the machair The west coast of South Uist looked very different in prehistory. Until a few years ago almost nothing was known about the Bronze Age and Early Iron Age in the Western Isles. Cladh Hallan - a prehistoric landscape Between 1989 and 2002 archaeologists had the opportunity to investigate two of these mounds, as they were being dug into for sand quarrying. Hallan cemetery south uist. Kildonan Centre. Uist and Barra « The Western Isles.

“As for the emigrants, even now and knowing the hardships and tragedies to which they were exposed, it is not possible to judge where advantage may have lain between an island where one family could lose ten of eleven children in childhood, or in risking all and paying the price”. 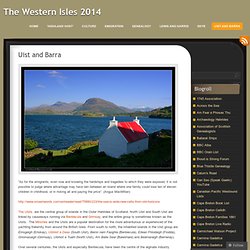 (Angus MacMillan) The Uists are the central group of islands in the Outer Hebrides of Scotland. North Uist and South Uist are linked by causeways running via Benbecula and Grimsay, and the entire group is sometimes known as the Uists. The Minches and the Uists are a popular destination for the more adventurous or experienced of the yachting fraternity from around the British Isles. From south to north, the inhabited islands in the Uist group are Èirisgeigh (Eriskay), Uibhist a Deas (South Uist), Beinn nam Faoghla (Benbecula), Eilean Fhlodaigh (Flodda), Griomasaigh (Grimsay), Uibhist a Tuath (North Uist), Am Baile Sear (Baleshare) and Beàrnaraigh (Berneray). MacDonalds of Uist Barra. Scottish Islands - Everything you need to know about the Scottish Islands. South Uist. South Uist (Scottish Gaelic: Uibhist a Deas) is an island of the Outer Hebrides in Scotland. 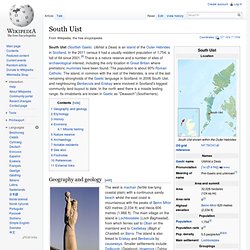 In the 2011 census it had a usually resident population of 1,754, a fall of 64 since 2001.[8] There is a nature reserve and a number of sites of archaeological interest, including the only location in Great Britain where prehistoric mummies have been found. The population is about 90% Roman Catholic. The island, in common with the rest of the Hebrides, is one of the last remaining strongholds of the Gaelic language in Scotland. In 2006 South Uist, and neighbouring Benbecula and Eriskay were involved in Scotland's biggest community land buyout to date. In the north west there is a missile testing range. Cladh Hallan Cemetery South Uist: Disclaimer. Uist and Barra « The Western Isles. Wind Observation Map - Britain.