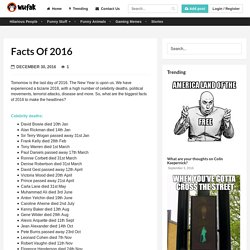 The New Year is upon us. We have experienced a bizarre 2016, with a high number of celebrity deaths, political movements, terrorist attacks, disease and more. So, what are the biggest facts of 2016 to make the headlines? Celebrity deaths: And unfortunately, many more. Some of the celebrities to have sadly passed away this year. Terrorist Incidents 1st Jan – 300 West African Migrants living in Libya were rounded up by ISIS and executed. 11th Jan – The Islamic State were responsible for over 100 people dying in two bomb blasts. 8th Feb – Again, the Islamic State massacred and executed over 300 civilians and police personal in Iraq. 22nd March – Three coordinated nail bomb attacks exploded in Brussels, Belgium. 21st April – Over 250 Iraqi women were executed by ISIS because they refused to become sex slaves. 12th June – Around 50 people killed and 53 injured as a suspected ISIS gunman entered a nightclub in Orlando, U.S.A, and began shooting. 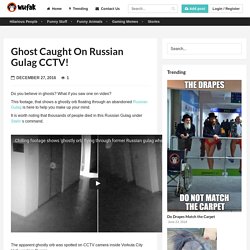 What if you saw one on video? This footage, that shows a ghostly orb floating through an abandoned Russian Gulag is here to help you make up your mind. It is worth noting that thousands of people died in this Russian Gulag under Stalin’s command. The apparent ghostly orb was spotted on CCTV camera inside Vorkuta City Hall, western Russia. Staff were absolutely stunned when they checked the footage and noticed the chilling scenes of an orb floating in-front of them. The orb originated from an office door. Ghost orb on CCTV in Russian gulag Staff at the institute claim that they “have never seen anything like this before!”. This is not the first, nor will it be the last time that people have claimed to witness a ghost caught on camera. So, are you a believer? Ghost Orbs Orbs, or “ghost orbs”/ “spirit orbs” are said to be small manifestations of a deceased persons soul.

However, the majority of ghost orbs that we see in photographs and videos have another explanation. 2017 Shall We Be Expecting An Apocalypse? The year 2016 has not been the best year. 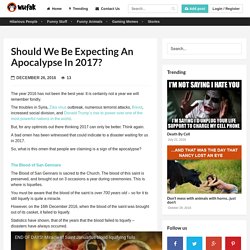 It is certainly not a year we will remember fondly. The troubles in Syria, Zika virus outbreak, numerous terrorist attacks, Brexit, increased social division, and Donald Trump’s rise to power over one of the most powerful nations in the world. But, for any optimists out there thinking 2017 can only be better. Think again. A bad omen has been witnessed that could indicate to a disaster waiting for us in 2017. Funny Cool RV - Best Mobile Home Meme. Funny Mcdonalds - Repenting For Their Sins Meme. Funny Christmas Party - Bathroom Smell Meme. Best Makeup Tutorial - Crazy Trick. Blac Chyna - Rob Kardashian Break Up. Taking Days Off - Don't Make Enough Money. Has Santa Lied About Young Boy Dying In His Arms? Has Schmitt-Matzen lied about his Christmas story? 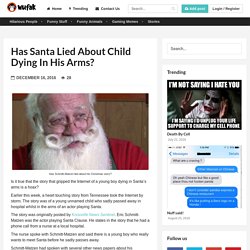 Is it true that the story that gripped the Internet of a young boy dying in Santa’s arms is a hoax? Earlier this week, a heart touching story from Tennessee took the Internet by storm. The story was of a young unnamed child who sadly passed away in hospital whilst in the arms of an actor playing Santa.

The story states: “He kinda sat up and gave me a big hug and asked one more question: ‘Santa, can you help me?’ I wrapped my arms around him. Everyone outside the room realised what happened. Relationships - How To Be Romantic. When Your Mum Asks Where Your Life Is Going. Early Christmas Wish - Naughty Santa. Getting Home - Looked Like Shit. Christmas Party - Fighting For Food. Urban Legends, Myths and Folklore's - From Around The World. We all love good urban legends, myths and folklore stories! 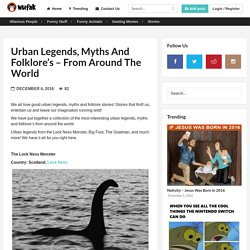 However, although many photographs of this urban legend are hoaxed, and sonar readings are yet to pick up anything to resemble the Lock Ness Monster – residents still believe in this folklore. The Goatman Country: U.S.A.