New Research Reveals the Real Causes of Depression. By: Dr. 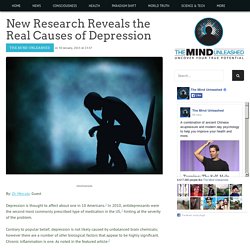 Mercola. Guest Depression is thought to affect about one in 10 Americans.1 In 2010, antidepressants were the second most commonly prescribed type of medication in the US,2 hinting at the severity of the problem. Contrary to popular belief, depression is not likely caused by unbalanced brain chemicals; however there are a number of other biological factors that appear to be highly significant. Chronic inflammation is one. “George Slavich, a clinical psychologist at the University of California in Los Angeles, has spent years studying depression, and has come to the conclusion that it has as much to do with the body as the mind. Scientists have also found that your mental health can be adversely impacted by factors such as vitamin D deficiency and/or unbalanced gut flora—both of which, incidentally, play a role in keeping inflammation in check, which is really what the remedy to depression is all about.

Inflammation and Depression As discussed in an article by Dr. Dr. The Ten Biggest Mistakes Psychiatrists Make. 1. 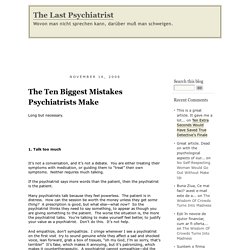 Talk too much It’s not a conversation, and it’s not a debate. You are either treating their symptoms with medication, or guiding them to “treat” their own symptoms. Neither requires much talking. Your Brain at Work. The Big Question: Why Am I Me? Psychiatry: An Industry of Death. Psychiatry: An Industry of Death is a controversial documentary on the horrors of psychiatry, of punishing and persecuting of the innocent and promoting Fascism, racism and atheism. 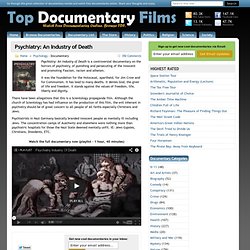 It was the foundation for the Holocaust, apartheid, for Jim Crow and for Communism. It has lead to many deaths. It denies God, the giver of life and freedom. It stands against the values of freedom, life, liberty and dignity. There have been allegations that this is a Scientology propaganda film. Psychiatrists in Nazi Germany basically branded innocent people as mentally ill including Jews. Watch the full documentary now (playlist - 1 hour, 40 minutes) Discovering Psychology: The Power of the Situation. In the early 1970s, Craig Haney, Curt Banks, Carlo Prescott, and Philip Zimbardo conducted a landmark situational study at Stanford University. 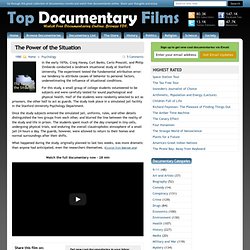 The experiment tested the fundamental attribution error: our tendency to attribute causes of behavior to personal factors, underestimating the influence of situational conditions. For this study, a small group of college students volunteered to be subjects and were carefully tested for sound psychological and physical health.

Half of the students were randomly selected to act as prisoners, the other half to act as guards. The study took place in a simulated jail facility in the Stanford University Psychology Department. Human Instinct. Every one of us possesses an armory of instincts which keep us alive. We are often barely aware of them, but they act every day to protect us from danger and keep us fit and healthy. How to Make Better Decisions. The Primacy of Consciousness. The fundamental nature of reality is actually consciousness. 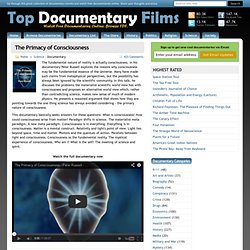 In his documentary Peter Russell explores the reasons why consciousness may be the fundamental essence of the Universe. Many have made such claims from metaphysical perspectives, but the possibility has always been ignored by the scientific community. In this talk, he discusses the problems the materialist scientific world view has with consciousness and proposes an alternative world view which, rather than contradicting science, makes new sense of much of modern physics. He presents a reasoned argument that shows how they are pointing towards the one thing science has always avoided considering - the primary nature of consciousness. This documentary basically seeks answers for these questions: What is consciousness? Watch the full documentary now. The Secret You. With the help of a hammer-wielding scientist, Jennifer Aniston and a general anaesthetic, Professor Marcus du Sautoy goes in search of answers to one of science's greatest mysteries: how do we know who we are? 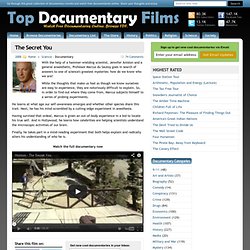 While the thoughts that make us feel as though we know ourselves are easy to experience, they are notoriously difficult to explain. So, in order to find out where they come from, Marcus subjects himself to a series of probing experiments. He learns at what age our self-awareness emerges and whether other species share this trait. Next, he has his mind scrambled by a cutting-edge experiment in anesthesia. Having survived that ordeal, Marcus is given an out-of-body experience in a bid to locate his true self. Finally, he takes part in a mind-reading experiment that both helps explain and radically alters his understanding of who he is. Watch the full documentary now. The Secret Life of Your Bodyclock. Biology of Dads. Every child needs a father is a phrase heard often enough, but is there any evidence to support it? 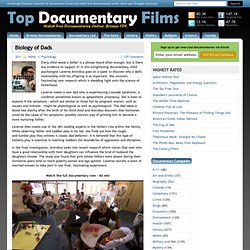 In this enlightening documentary, child psychologist Laverne Antrobus goes on a quest to discover why a dad's relationship with his offspring is so important. She uncovers fascinating new research which is shedding light onto the science of fatherhood. Laverne meets a new dad who is experiencing Couvade Syndrome, a condition sometimes known as sympathetic pregnancy. The Human Face. Watch Free Documentary Online. Punishment: A Failed Social Experiment. Punishment: A Failed Social Experiment provides a detailed, critical analysis of the current legal and justice system generally in operation across the world whilst also providing potential solutions which work on preventing crime and creating a much more socially sustainable society. 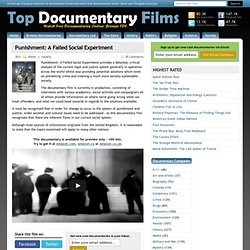 The documentary film is currently in production, consisting of interviews with various academics, social activists and campaigners all of whom provide information on where we're going wrong when we treat offenders, and what we could head towards in regards to the solutions available. It must be recognized that in order for change to occur in the system of punishment and justice, wider societal and cultural issues need to be addressed - as this documentary film recognizes that there are inherent flaws in our current social system.