Why were we at war? 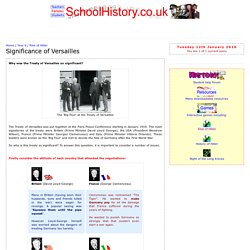 The Treaty of Versailles was put together at the Paris Peace Conference starting in January 1919. The main signatories of the treaty were Britain (Prime Minister David Lloyd George), the USA (President Woodrow Wilson), France (Prime Minister Georges Clemenceau) and Italy (Prime Minister Vittorio Orlando). These leaders were known as the 'Big Four' and met to decide the fate of Germany after the First World War. So why is this treaty so significant? To answer this question, it is important to consider a number of issues. Firstly consider the attitude of each country that attended the negotiations: Germany wasn't even invited to the peace treaty. Clearly agreement was going to be very difficult, as each country felt they knew best. It is important to actually consider what the terms of the treaty said: A summary of the terms of the treaty includes: Who was Winston Churchill? Facts and Information.

Here are some facts about the British Prime Minister who is best known for his leadership during World War 2. 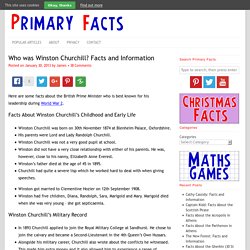 Facts About Winston Churchill’s Childhood and Early Life Winston Churchill was born on 30th November 1874 at Blenheim Palace, Oxfordshire.His parents were Lord and Lady Randolph Churchill.Winston Churchill was not a very good pupil at school.Winston did not have a very close relationship with either of his parents. He was, however, close to his nanny, Elizabeth Anne Everest.Winston’s father died at the age of 45 in 1895.Churchill had quite a severe lisp which he worked hard to deal with when giving speeches.Winston got married to Clementine Hozier on 12th September 1908.Winston had five children, Diana, Randolph, Sara, Marigold and Mary. Marigold died when she was very young – she got septicaemia. Winston Churchill’s Military Record In 1893 Churchill applied to join the Royal Military College at Sandhurst. World War II homework help. The main countries and leaders that made up the Allied powers were: Great Britain – led by Prime Minister Winston ChurchillThe United States – led by President Franklin D RooseveltFrance – led by Charles de GaulleThe Soviet Union – led by Joseph StalinChina – led by Chiang Kai-shek The three main countries and leaders that made up the Axis powers were: Germany – the Nazis, led by Adolf HitlerItaly – the Fascists, led by Benito MussoliniJapan – known at that time as the Empire of Japan, led by Hideki Tojo; the emperor of Japan during World War II was Emperor Hirohito. 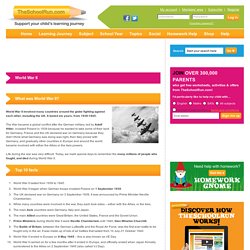 World War II began when the UK and France declared war on Germany, after German troops led by Adolf Hitler had invaded Poland on 1 September 1939 to claim land there as their own. Hitler had already invaded Austria and Czechoslovakia, so the war began over his plan to take more land for Germany. The Siege of Leningrad is a famous event during World War II. June 6, 1944 is also known as D-Day. Why did World War II Start? Since 1933, Germany had been ruled by Adolf Hitler and his political party, the Nazis. 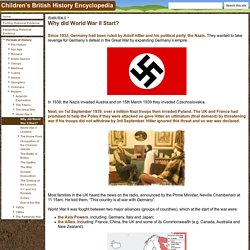 They wanted to take revenge for Germany’s defeat in the Great War by expanding Germany’s empire. In 1938, the Nazis invaded Austria and on 15th March 1939 they invaded Czechoslovakia. Next, on 1st September 1939, over a million Nazi troops then invaded Poland. The UK and France had promised to help the Poles if they were attacked so gave Hitler an ultimatum (final demand) by threatening war if his troops did not withdraw by 3rd September. Primary History - World War 2 - World at war. World War Two (WW2) for Kids. Remembrance Day For almost six years from 1939 to 1945 Britain fought the toughest war it had ever experienced. World War II was total war - every person, every business, every service was involved. Britain did not fight alone, the war also involved many countries.

World War II involved 61 countries with 1.7 billion people (three quarters of the world's population). Fifty million people lost their lives and hundreds of millions people were injured. After World War One ended in 1918, Germany had to give up land and was banned from having armed forces. In 1933 the German people voted for a leader named Adolf Hitler, who led a political party in Germany called the National Socialists or Nazis. Shortly before 5am on Friday 1st September, 1939, German forces stormed the Polish frontier. World War Two in Europe began on 3rd September 1939, when the Prime Minister of Britain, Neville Chamberlain, declared war on Germany. Countries What countries fought on which side?