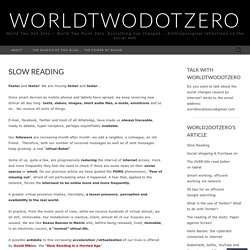 We are moving faster and faster… Slow Reading. The OVER-60s read better on tablet. There are researches that underline obvious facts and others that reach targets not even hypothesized at first, researches that change our perspective confirming and overcoming some of our prejudices. 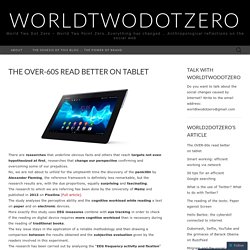 No, we are not about to unfold for the umpteenth time the discovery of the penicillin by Alexander Fleming, the reference framework is definitely less remarkable, but the research results are, with the due proportions, equally surprising and fascinating. The research to which we are referring has been done by the University of Mainz and published in 2013 on PlosOne (Full article). The study analyses the perceptive ability and the cognitive workload while reading a text on paper and on electronic devices. More exactly this study uses EEG measures combine with eye tracking in order to check if the reading on digital device requires more cognitive workload than is necessary during the reading of traditional books.

WorldTwoDotZero. Smart working: efficient working via network. The Internet has had a massive impact on our lives, our day-to-day life, on our personal relationships and, for many of us, on our job as well; an unthinkable impact only a decade ago. 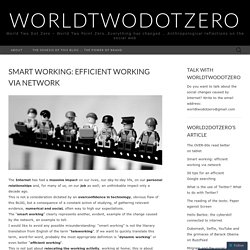 This is not a consideration dictated by an overconfidence in technology, obvious flaw of this BLOG, but a consequence of a constant action of studying, of gathering relevant evidence, numerical and social, often way to high our expectations. The “smart working” clearly represents another, evident, example of the change caused by the network, an example to tell. I would like to avoid any possible misunderstanding: “smart working” is not the literary translation from English of the term “teleworking”. If we want to quickly translate this term, word-for-word, probably the most appropriate definition is “dynamic working” or even better “efficient working“.

WorldTwoDotZero Like this: Like Loading... 50 tips for an efficient Google searching. About a year ago in the article entitled “Me, you, them, Google and the first three search results” we had carefully examined some data set that were monitoring search activities through Google. 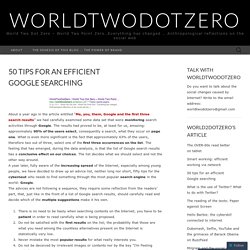 The results had proved to be, at least for us, amazing: approximately 90% of the users select, consequently a search, what they occur on page one. What is the use of Twitter? What to do with Twitter? I am a Facebook user for years, but I can’t figure out what I can do with Twitter. 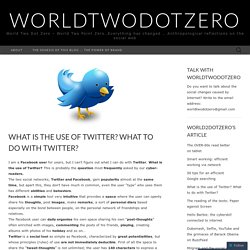 What is the use of Twitter? This is probably the question most frequently asked by our cyber-readers. The two social networks, Twitter and Facebook, gain popularity almost at the same time, but apart this, they don’t have much in common, even the user “type” who uses them has different abilities and behaviors.Facebook is a simple tool very intuitive that provides a space where the user can openly share his thoughts, post images, make remarks, a sort of personal diary based especially on the bond between people, on the personal network of friendships and relatives. What are the strong points of this “synthetic” social network? Vice versa for those who consider your Twitter interesting; they may follow you becoming your followers. WorldTwoDotZero Like this: Like Loading... The reading of the texts: Paper against Screen. La lettura dei testi: Carta contro Schermo. 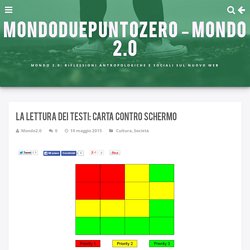 Hello Barbie: the cyberdoll connected to internet. Milgram and the social networks that make the world a smaller place. We are “way back” in 1967, where there is no personal computer, no smartphones and, above all, no internet and no social networks, at most, if we are NASA scientists, we have at our disposal a supermainframe (computer) big like a building and with the power of elaboration of a modern scientific calculator. 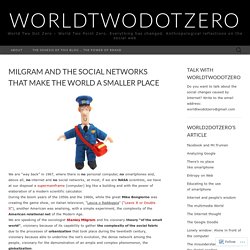 During the boom years of the 1950s and the 1960s, while the great Mike Bongiorno was creating the game show, on italian television, “Lascia o Raddoppia” (“Leave It or Double It“), another American was analising, with a simple experiment, the complexity of the American relational net of the Modern Age. WorldTwoDotZero ..it cannot happen again that someone should dare disturb me when I am at play, when I set free the phantoms of my imagination, when I think! (Frigyes Karinthy) Like this: Like Loading... Bye bye handwriting. Emoticon, Emoji, Kaoani, Henohenomoheji, Shift_JIS art. What would you give up for the Internet? Would you give up coffee, chocolate, showers? In this article we’ll try to take ourselves less seriously and we’ll do it by analyz erred to as “The Internet Economy in the G-20″ carried out by Boston Consulting Group (BCG). 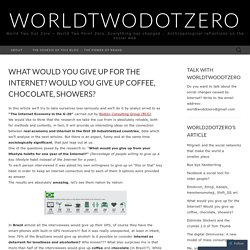 We would like to think that the research we take the cue from is absolutely reliable, both for methods and contents, in fact, it will provide us interesting ideas on the connection between real economy and internet in the first 20 industrialized countries, data which we’ll analyse in the next articles. But there is an aspect, funny and at the same time sociologically significant, that just leap out at us.

One of the questions posed by the research is: “What would you give up from your lifestyle habits for one year of the Internet?” (Percentage of people willing to give up a key lifestyle habit instead of the Internet for a year). In Brazil almost all the interviewees would give up their GPS, of course they have the smart phones with built-in GPS receivers!!! WorldTwoDotZero Like this: Like Loading... Dubsmash, Selfie, YouTube and the grimaces of Barack Obama on BuzzFeed. Web 2.0 for teaching.

Web 2.0 Sociology - Anthropological reflections on the social we

Social Network Systems. From Moreno’s Sociometry to Social Network Analysis: Let’s analyse ourselves! Hypertexts and hypermedia: Farewell sequential reading of the text! HASHTAG: the tool of social communication. News on paper or online? The Spin cycle: Technologies, people, society in “global rotation” The digital Omnivores: A new model of mass consumption. Estimote Stickers and the crumbs 2.0 of Tom Thumb. Me, you, them, Google and the first three search results. This article takes cue from the news released a few weeks ago which revealed the important goal achieved by Google: 100 billion searches by month. 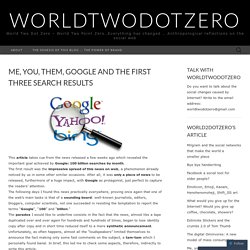 The first result was the impressive spread of this news on web, a phenomenon already noticed by us in some other similar occasions. After all, it was only a piece of news to be released, furthermore of a huge impact, with Google as protagonist, just perfect to capture the readers’ attention. The following days I found this news practically everywhere, proving once again that one of the web’s main tasks is that of a sounding board: well-known journalists, editors, bloggers, computer scientists, not one succeeded in resisting the temptation to report the terms “Google“, “100” and “billion.” 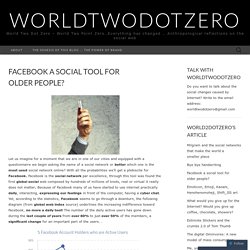 With all the probabilities we’ll get a plebiscite for Facebook. Facebook is the social network par excellence, through this tool was found the first global social web composed by hundreds of millions of knots, real or virtual it really does not matter. Because of Facebook many of us have started to use internet practically daily, interacting, expressing our feelings in front of the computer, having a cyber chat. Yet, according to the statistics, Facebook seems to go through a downturn, the following diagram (from global web index source) underlines the increasing indifference toward Facebook, no more a daily tool!

Obviously these data must be carefully carried out and cross-checked with other indicators. WorldTwoDotZero Like this: Like Loading... Bye bye handwriting. Milgram and the social networks that make the world a smaller place.