Venezuela’s democratic façade has completely crumbled. Moisés Naim is a distinguished fellow at the Carnegie Endowment for International Peace and served as Venezuela’s minister of trade and industry from 1989 to 1990. 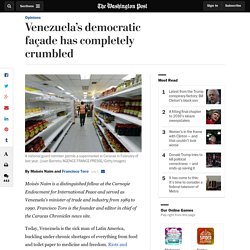 Francisco Toro is the founder and editor in chief of the Caracas Chronicles news site. Today, Venezuela is the sick man of Latin America, buckling under chronic shortages of everything from food and toilet paper to medicine and freedom. Riots and looting have become commonplace, as hungry people vent their despair while the revolutionary elite lives in luxury, pausing now and then to order recruits to fire more tear gas into crowds desperate for food. Surveillance camera footage shows violent looting take over a bakery in the Venezuelan capital of Caracas as the country battles widespread shortages of basic goods amid a reeling economic crisis. (Reuters) Chávez was either admired as a progressive visionary who gave voice to the poor or dismissed as just another third-world buffoon. Something similar happened with the media. Hugo Chávez’s Dream Is Dead but His Fanatics Refuse to Fade Away. A flailing opposition and broken markets are nothing new here, and this time is no different. 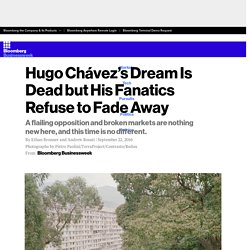 By Ethan Bronner and Andrew Rosati | September 22, 2016 Photographs by Pietro Paolini/TerraProject/Contrasto/Redux From The judge is shaking. Never mind that she’s sitting in her office dressed with the tasteful elegance of a jurist, a large painting of Venezuela’s national hero, Simón Bolívar, on one wall, watercolors on another. “I don’t know how my colleagues live with themselves,” she says, her hands trembling as she removes her eyeglasses, rubs her temples, and then shuffles some papers. Photographer: Carlos Becerra/Bloomberg From a distance, Venezuela, with its crashing oil prices and alarming shortages, appears on the brink of political upheaval.

Even as the suffering increases for the country’s 30 million inhabitants, the government appears—for now—secure. None of this negates the country’s harsh reality. Venezuela is a land of natural bounty. Chávez did. Alejandro Riera used to. Venezuelan Democracy in Limbo. Photo Caracas, Venezuela — The decision on Thursday by several Venezuelan courts to annul the signatures gathered to activate a recall referendum casts into limbo the possibility of removing President Nicolás Maduro from office by constitutional, peaceful and electoral means. 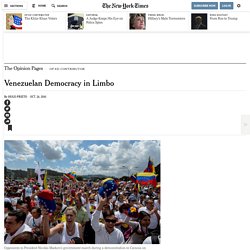 Unsurprisingly, the National Electoral Council used the decision to announce a few hours later that this week’s signature collection had been suspended, thus preventing the referendum from being carried out. This judicial stratagem exudes an aura of illegality and cannot be explained without taking into account the ironclad concentration of powers wielded by the Chavista government in Venezuela since 2005.

As the constitutional lawyer Gustavo Linares Benzo has stressed, Article 35 of the Penal Code “clearly states that no criminal court judge may annul administrative acts.” Venezuela is at a breaking point. The house arrest benefit granted to Mr. It will be like crossing a desert. Continue reading the main story. How Much Longer Can Venezuela Go On Like This? When Nicolas Maduro won a much-contested election to become president of Venezuela in 2013, he sought to ape his predecessor, the late Hugo Chavez. 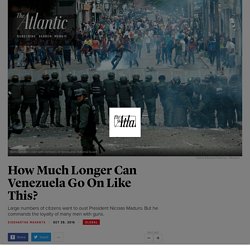 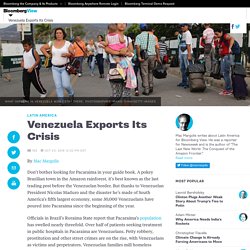 A pokey Brazilian town in the Amazon rainforest, it’s best known as the last trading post before the Venezuelan border. But thanks to Venezuelan President Nicolas Maduro and the disaster he’s made of South America’s fifth largest economy, some 30,000 Venezuelans have poured into Pacaraima since the beginning of the year. Officials in Brazil’s Roraima State report that Pacaraima’s population has swelled nearly threefold. Over half of patients seeking treatment in public hospitals in Pacaraima are Venezuelans. 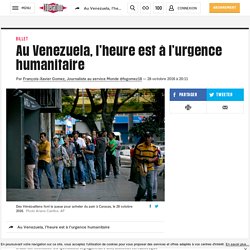 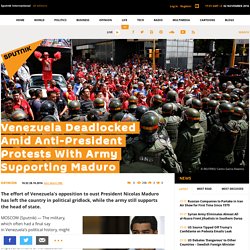 Crisis starting point Maduro came to presidency upon the 2013 death of iconic leader Hugo Chavez. While Chavez rule was marked with high prices for oil, necessary to keep the economy of the oil-producing Venezuela afloat and widely used to support the poorest and most vulnerable members of society, Maduro's years in power have been hampered by turbulence on global oil market that devastated Venezuela’s economy. The country started to face shortages in medicine, food and electricity supplies. The situation has been exacerbated by three-digit inflation. Meanwhile, Maduro, as his opponents claim, has moved toward an increasingly autocratic rule. © AFP 2016/ George Castellanos What is next © AP Photo/ Ariana Cubillos "The armed forces are (still?)