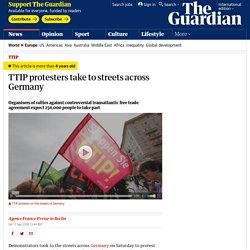 There were seas of flags in both Berlin and Munich as people flocked to join the rallies despite the rain, carrying placards and banners representing everything from anti-globalisation groups to political parties and unions. “People are not letting their mood be ruined” by the weather, said a spokeswoman for the organisers, Kathrin Ottovay. Roland Suess from anti-globalisation group Attac had earlier said the group expected 250,000 people to turn out in seven German cities to register their opposition to the Transatlantic Trade and Investment Partnership (TTIP), which the EU and US began negotiating in 2013.

A new round of talks is due to start in October, and Barack Obama wants the deal concluded before he leaves office in January. TTIP et CETA: « Nos PME ne seront pas les premières bénéficiaires de ces futurs accords » Brexit Won’t Be So Bad If the U.S. Strikes the TTIP Deal. The Trans-Pacific Partnership (TPP) has been in the news of late, with President Barack Obama pushing for its approval and both presidential candidates distancing themselves from the pact. 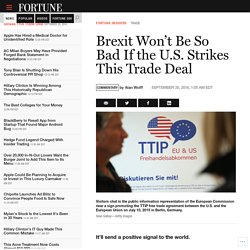 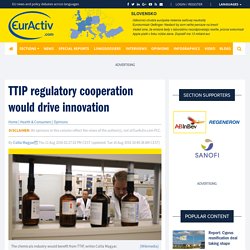 Csilla Magyar is director of EU trade and chemicals policy at The Dow Chemical Company. We live in a world of growing environmental and societal challenges, including the need to feed a growing population and the increasingly pressing problems of energy efficiency and water security. Rapidly emerging technologies, however, provide a growing optimism that scientific ingenuity can help us to overcome these hurdles and deliver more sustainable growth. The chemical industry provides materials for everything from water treatment to innovative solutions that help to reduce food waste, protect crops and boost yield. To transform good ideas into great products, a predictable and innovation-friendly policy environment, a rigorous and transparent regulatory framework and open trade are needed.

This is Why US, Europe Cannot Agree on TTIP Trade Deal. © REUTERS/ Kai Pfaffenbach After the Trans-Pacific Partnership (TPP) deal was signed in October 2015, many expected a similar agreement between the United States and the European Union. 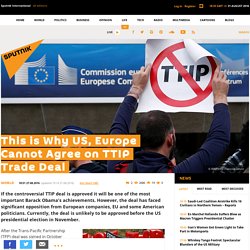 The Transatlantic Trade and Investment Partnership (TTIP) was expected to become one of the most important achievements of President Barack Obama. This milestone deal would connect the two biggest markets in the world and bolster US leadership in writing the rules of global trade, an article by the Carnegie Moscow Center think-tank read. If the deal is approved the US will be in the center of a new geo-economic structure while other nations will have to find ways to join the US-led blocs. Analysis: did Germany just pull the plug on Obama’s European trade deal? US President Barack Obama has long envisioned leaving office with two trade deals in place: the Trans-Pacific Partnership with Asian nations, and the Transatlantic Trade and Investment Partnership with Europe. 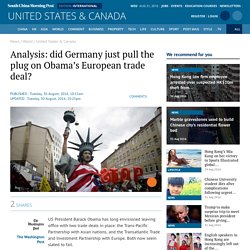 Both now seem slated to fail. On Sunday, German Economic Minister and vice-chancellor Sigmar Gabriel, a close ally of Chancellor Angela Merkel, said that TTIP talks between the US and EU have essentially fallen apart. “In my opinion, the negotiations with the United States have de facto failed, even though nobody is really admitting it,” Gabriel said during a question-and-answer session with citizens in Berlin.

He added that after 14 rounds of talks, the two sides haven’t agreed on one common item out of 27 chapters being discussed. TTIP : l'Allemagne parle d'échec, Bruxelles défend des avancées. France demands an end to TTIP talks. France’s trade minister has increased the pressure on the proposed EU-US trade deal by calling for the talks to be called off. 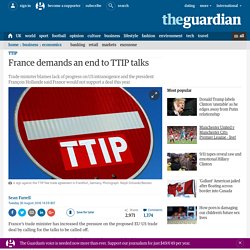 Matthias Fekl, the French minister for foreign trade, tweeted that his government demanded negotiations on the Transatlantic Trade and Investment Partnership (TTIP) should cease. François Hollande, the French president, also raised doubts about TTIP and said France would not support a deal this year. In a speech to French ambassadors, Hollande said: “The negotiations are bogged down, positions have not been respected, it’s clearly unbalanced.”