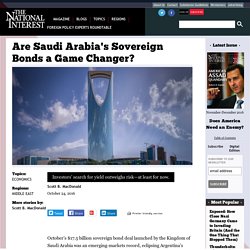 According to the Financial Times, demand for the Saudi deal was well in excess of its size, reaching $67 billion. The size and success of the Saudi deal reflects the increasingly risky nature of global securities markets and has significant geopolitical implications. International financial markets are dominated by the search for yield. A number of factors are at play: a growing number of people in the West and Japan are trying to retire and tap retirement and pension plans, wages in many advanced economies have stagnated for an extended period, and near-zero or negative-interest-rate policies by major central banks have increasingly penalized savers, pension funds and insurance companies. 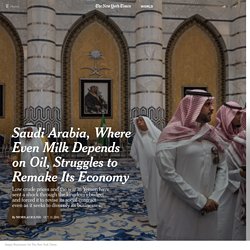 The only way to create more jobs for Saudis in such an environment may be by getting rid of foreign workers and replacing them with locals. That policy, known as Saudization, has been pursued at least since the early 1980s and always failed, with the number of foreign laborers ballooning from roughly one million to 10 million. Now, though, the government is pressing companies harder. Foreign workers cost less, but the government levies fines and refuses to renew visas for foreign workers if business rosters dip below a certain percentage of Saudis. Is Qatar's economy feeling the pinch? Image copyright Getty Images The energy-rich Arab emirate of Qatar is one of the wealthiest countries in the world, with a reputation for lavish spending and generous state handouts. 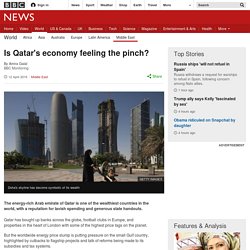 Qatar has bought up banks across the globe, football clubs in Europe, and properties in the heart of London with some of the highest price tags on the planet. But the worldwide energy price slump is putting pressure on the small Gulf country, highlighted by cutbacks to flagship projects and talk of reforms being made to its subsidies and tax systems. Is this a signal that the economic superpower is finally feeling the financial squeeze? Digital technologies key driver in diversifying economies. Digital is now identified as a vital enabler of economic diversification and growth For countries in the Middle East region, digital technologies are seen as a key driver of efforts to diversify economies and transform communities, according Accenture’s Technology Vision 2016 report. 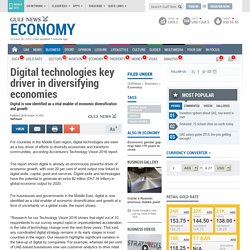 The report shows digital is already an enormously powerful driver of economic growth, with over 20 per cent of world output now linked to digital skills, capital, good and services. Digital skills and technologies have the potential to generate an extra $2 trillion (Dh7.34 trillion) in global economic output by 2020. For businesses and governments in the Middle East, digital is now identified as a vital enabler of economic diversification and growth at a time of uncertainty on a global scale, the report shows.

“Research for our Technology Vision 2016 shows that eight out of 10 respondents to our survey expect rapid or unprecedented acceleration in the rate of technology change over the next three years. OPEC and UN climate body signal closer ties. Bloc of oil-exporting countries agrees on a need for economic diversification, in light of the Paris climate deal The head of OPEC has paid an official visit to the UN climate chief in Bonn, in a diplomatic first that the pair said heralds a new era of cooperation between the two bodies. 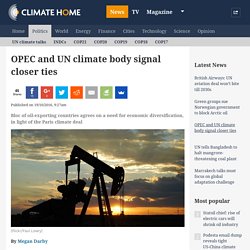 Mohammad Barkindo and Patricia Espinosa talked about economic diversification, according to a joint press release. That is code for investing less in oil and more in other sectors. It is “an important objective for building economic resilience,” the statement read, with a high level event on the topic planned for next month’s climate talks in Marrakech.