Cyberattack raises questions about growing internet vulnerabilities. Could millions of connected cameras, thermostats and kids' toys bring the internet to its knees? 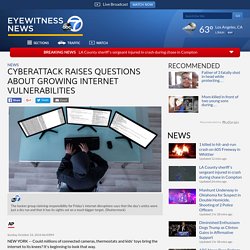 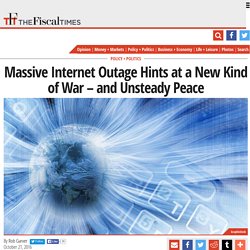 But whether the huge distributed denial of service (DDoS) attack originated in Russia, China, Eastern Europe or right here in the U.S., it’s a reminder of how vulnerable the infrastructure that our increasingly interconnected society relies on is, and makes the increasing willingness of government actors to engage in cyberattacks extremely worrying. Friday’s attack was aimed at Dyn, a domain name service provider that channels internet traffic to its clients. The company’s systems were overwhelmed briefly Friday by huge numbers of requests made simultaneously with the aim of crowding out legitimate web traffic.

Related: Is This the Real Reason Putin Is Interfering With the US Election? Early Friday morning, the company reported, “we began monitoring and mitigating a DDoS attack against our Dyn Managed DNS infrastructure. Objets connectés et sécurité : pourquoi faut-il des normes ? 'Smart' devices 'too dumb' to fend off cyber-attacks, say experts. “Smart” internet-connected devices such as webcams, kettles and baby monitors are “too dumb” to resist the kind of cyber-attack that brought down some of the world’s most popular websites on Friday, experts have warned. 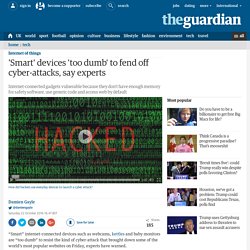 Richard Sims, a product development consultant at the Technology Partnership, said such devices – commonly referred to as the “internet of things” – often connect to the internet by default and use stock code from open-source software, which makes them easier to hack. Mercedes Bunz, a lecturer at the University of Westminster, said connected devices were not smart enough to have safety software installed, adding: “You can’t install a firewall on a baby monitor because it doesn’t have enough memory.” 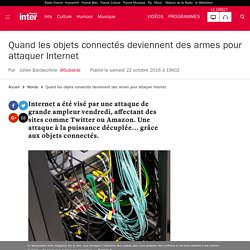 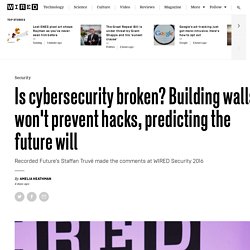 We just need to find them. That was the take away line from Staffan Truvé's talk at the inaugural WIRED Security event in Canary Wharf during which he explained how it is possible to predict the future online, and how the current methods of cyber defence aren't working. Truvé is Recorded Future's CTO. Recorded Future makes software that predicts what will happen next by analysing all of the text on the open web. Truvé believes that the best way to stop attacks is to learn the ways hackers work and use intelligence to stop them. Aberkane - Ce que nous apprend la cyberattaque du "10-21" The DDOS attack yesterday reminds us of how vulnerable we are to flaws in technology — Quartz. For as long as there’s been an internet, its evangelists have assured us increased connectivity will yield a brighter future. 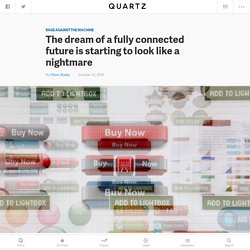 The web, they’ve said, will bring us closer through new forms of mass communication, connect us to business and government to give us more power over our lives, and deliver a whole new world of goods and services. We got all that, and almost all of us have benefitted in some way from the fruits of the technology. But we also got massive disruptions and job losses in industries from banking to entertainment, the rise of menacing troll culture and—as we were reminded once again on Oct. 21—a frightening vulnerability to hacking, viruses, and other attacks. 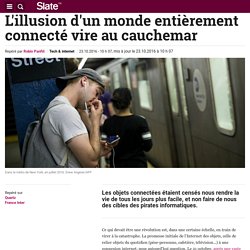 Cyber attack: hackers 'weaponised' everyday devices with malware to mount assault. The huge attack on global internet access, which blocked some of the world’s most popular websites, is believed to have been unleashed by hackers using common devices like webcams and digital recorders. 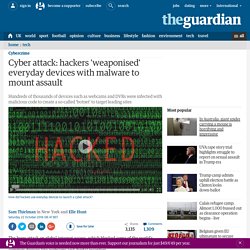 Among the sites targeted on Friday were Twitter, Paypal and Spotify. All were customers of Dyn, an infrastructure company in New Hampshire in the US that acts as a switchboard for internet traffic. Outages were intermittent and varied by geography, but reportedly began in the eastern US before spreading to other parts of the country and Europe.