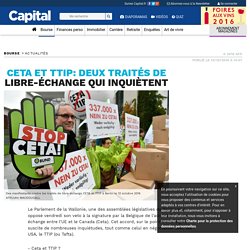 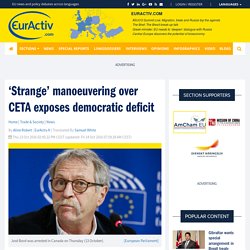 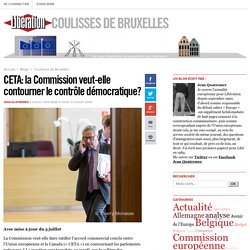 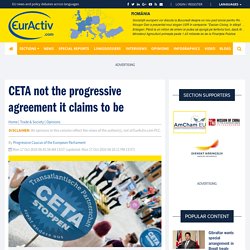 Both assumptions are wrong: if CETA really was such a progressive agreement, it would have been negotiated in a transparent way and democracy would not have been undermined by preliminary application, argue a number of MEPS. This opinion piece was co-signed by 17 members of the European Parliament, from three different political groups. In reality, the EU-Canada trade deal fosters excessive liberalisation and deregulation: it weakens governments’ rights to regulate in the public interest and the so-called “additional declaration” does not provide legal protection in key areas and does not meet the requirements of our legal traditions.

When the Transatlantic trade negotiations were launched, both European and American leaders failed to understand why they were the target of a wave of scepticism in public opinion. Challenges to Canadian Trade Deal Chip at EU’s Credibility. Non M. Bové, l'Europe ne sacrifie pas ses fromages ! Europe's Trade Policy: Can a Phoenix Rise From the Ashes? TTIP is dead but CETA can still be saved. 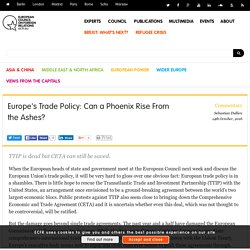 When the European heads of state and government meet at the European Council next week and discuss the European Union’s trade policy, it will be very hard to gloss over one obvious fact: European trade policy is in a shambles. There is little hope to rescue the Transatlantic Trade and Investment Partnership (TTIP) with the United States, an arrangement once envisioned to be a ground-breaking agreement between the world’s two largest economic blocs. Public protests against TTIP also seem close to bringing down the Comprehensive Economic and Trade Agreement (CETA) and it is uncertain whether even this deal, which was not thought to be controversial, will be ratified. But the damage goes beyond single trade agreements.

The past year and a half have damaged the European Commission’s influence over trade issues. How did we get here? Part of the blame clearly lies with the European Commission. Canadian executives worried that protectionism could hurt trade. Canadian executives are worried that the protectionist political environment emerging in North America and Europe could damage trade agreements that help boost the economy. 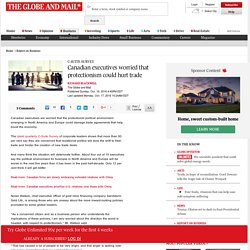 The latest quarterly C-Suite Survey of corporate leaders shows that more than 80 per cent say they are concerned that isolationist politics will slow the shift to freer trade and hinder the creation of new trade deals. And many think the situation will deteriorate further. About four out of 10 executives say the political environment for business in North America and Europe will be worse in the next five years than it has been in the past half-decade. Only 12 per cent think it will get better. What you need to know about CETA. The Comprehensive Economic and Trade Agreement is the most significant trade deal Canada has negotiated since the North American Free Trade Agreement, which took effect in 1994. 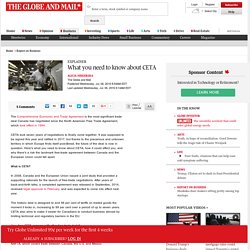 CETA took seven years of negotiations to finally come together. It was supposed to be signed this year and ratified in 2017, but thanks to the precarious and unknown territory in which Europe finds itself post-Brexit, the future of the deal is now in question. Think TTIP is a threat to democracy? There’s another trade deal that’s already signed. As the great powers gathered in Japan for last week’s G7 summit, a series of massive trade deals were under attack from all sides. 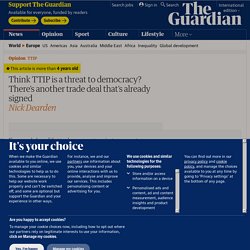 And yet, from Donald Trump to Jeremy Corbyn, there is a recognition that “trade” has become little more than a synonym for big business to take ever more control of society. The US-Europe deal TTIP (the Transatlantic Trade and Investment Partnership) is the best known of these so-called “new generation” trade deals and has inspired a movement. More than 3 million Europeans have signed Europe’s biggest petition to oppose TTIP, while 250,000 Germans took to the streets of Berlin last autumn to try to bring this deal down. A new opinion poll shows only 18% of Americans and 17% of Germans support TTIP, down from 53% and 55% just two years ago. But TTIP is not alone. The one positive thing about Ceta is that it has already been signed and that means that we’re allowed to see it. Just consider financial regulation.

Indeed the onslaught has already started.