Fastest growing digital news outfit of India. In the times of Policy making in Journalism, We provide unbiased news, and not just opinions. 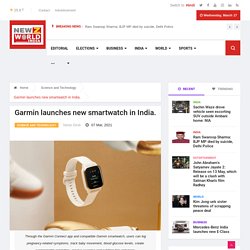 For good health, you have to make six changes in your diet. Little changes to our routine and diet can, therefore, make a world of difference. 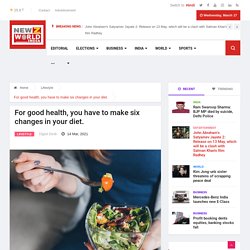 To begin with, have these six food items to help you deal with anxiety in a more mindful manner. With the conversation around mental health at the forefront, it is time to not only be considerate towards others but also show compassion for self. India will soon get its largest floating Solar Plant. Electricity generation is among the major causes of climate change around the globe. 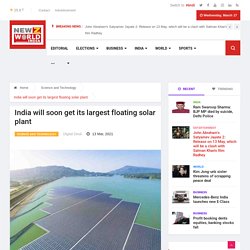 Most of the electricity comes from nonrenewable energy sources like coal, nuclear, and other sources. Producing energy from these resources has a severe impact on our environment, polluting our air, land, and water. Clean energy development is an important key against climate change and limiting its most devastating effects. On similar lines, India is en route to its biggest floating solar plant to date. World's Smallest Punch-Hole Design. Let me tell you that before this, 2.5-millimetre punch hole was seen in Vivo S5. 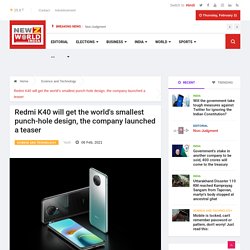 Which was the smallest punch hole cut out yet. Avoiding these 5 things while dieting will make weight loss even easier. Obesity is the result of changes in lifestyle and deteriorating habits of our food habits, which once increased, one has to work hard to reduce it. 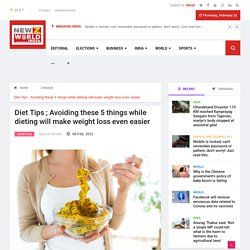 Increasing weight can cause many diseases like sugar, blood pressure and heart diseases, so it is very important to control weight gain. Obesity is a disease in itself, which also causes other diseases to flourish. The leading cause of obesity is a combination of high calorie intake, lack of physical activity and genetics. The first thing we try to control obesity is diet control, but you know that you also consume a lot of things while dieting, which increases your fat loss. New Labor Code: Work only four days a week, three days off. Companies can get discounts like reducing the number of working days to 4 days a week and giving medical checkup facility to the employees free of cost through state insurance. 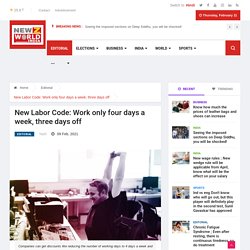 The Union Ministry of Labor and Employment is working on a new labour code. In the labour code, companies can get discounts like reducing the number of working days to 4 days a week and giving medical checkup facility to the employees free of cost through state insurance. According to the new labour code, companies cannot get more than 48 hours of work in a week. Labor and Employment Secretary Apoorva Chandra has said that companies will have the freedom to make rules for 3 days paid leave and 12 hours of work every day, but for this, the consent of the employees will be necessary. Chandra said, " We are not imposing any pressure on neither the employees nor the companies to adopt the rules. New wedge rule will be applicable from April. Increased retrospective benefits and additional PF (provident fund) contributions to benefits plans such as gratuity and leave encashment may require companies to review their salary increment budget. 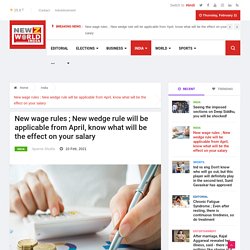 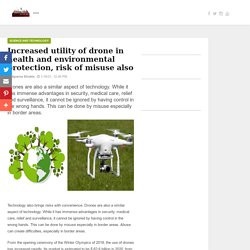 Drones are also a similar aspect of technology. While it has immense advantages in security, medical care, relief and surveillance, it cannot be ignored by having control in the wrong hands. To get rid of diabetes, you have to change your habits. According to a November 2017 report by the Indian Council of Medical Research, the Institute for Health Metrics and Evaluation and the Public Health Foundation of India, diabetes cases in India increased by 64 percent in the last 25 years. 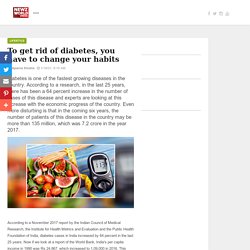 Now if we look at a report of the World Bank, India's per capita income in 1990 was Rs 24,867, which increased to 1,09,000 in 2016. This directly means that as prosperity increases, diabetes patients are also increasing. According to the research, in 2017, 49 percent of the world's total diabetes patients were in India, and in 2025, when this figure will reach 13.5 million, there is a big burden on the country's public health services as well as a big challenge financially.

Will because the government is providing free health insurance facility to a large population of the country. Read It :- You can workout at home like the gym, these tips will be helpful According to Dr. Dr. Dr. Vaccination of youth before the elderly is not right: World health organization. Geneva: World Health Organization (WHO) Director-General Tedros Adhanom Ghebreyesus has said that it is not 'right' for young and healthy people in rich countries to put Covid-19 vaccines before elderly people in poor countries. 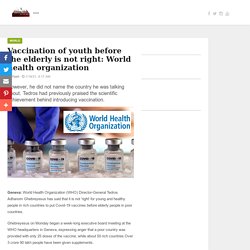 Ghebreyesus on Monday began a week-long executive board meeting at the WHO headquarters in Geneva, expressing anger that a poor country was provided with only 25 doses of the vaccine, while about 50 rich countries Over 3 crore 90 lakh people have been given supplements. Read It :- The holy kolam rangoli will also be a part of the swearing-in ceremony of Biden-Harris The WHO chief said, 'Not only 25 million, nor 25 thousand but only 25 doses were provided to the poorest country.

I am saying this is very clear words.' What did part of the Veteran cricketers of the world said in praise of Shubman? Shubman Gill is the next big name of Indian cricket. Indonesia Plane Crash: human remains and debris found - Newzworldindia. Jakarta: Relief and rescue team members searching for the Boeing 737-500 crashed shortly after takeoff from Indonesia's capital, Jakarta, were rescued from the sea of ​​Java on Sunday morning with human remains, torn clothes and metal and Some pieces have been found.

Officials gave this information. Market review: mustard, soyabean in the range of Rs 13,000 quintal - Newzworldindia. Big news for those who smoke cigarettes and tobacco - Newzworldindia. भारत में बनी वैक्सीन को मिली मंजूरी OPPO set up first 5G innovation laboratory in India. Sonu Sood replied to those who trolled him when Sonu called himself 'Messiah' Habits: Having these in breakfast, you can be a victim of serious diseases. Do you know thy BCCI may lose 906 crores? ICC T20 World Cup 2021: The ICC T20 World Cup is to be played in India this year.

If the Indian government does not give tax exemption to host the T20 World Cup, then the Board of Control for Cricket in India (BCCI) may have to pay a tax of Rs 906 crore. Even if the government gives some relief, the Cricket Board of India will have to pay Rs 227 crore as tax. These small banks are paying more interest than big banks like HDFC.

Many banks, including State Bank, Axis Bank, ICII Bank, HDFC, are offering 7 to 7.5% interest on fixed deposits in deposits ranging from seven days to 10 years. At the same time, there are some small finance banks, who are paying more interest on FD than these big banks. At the same time, these banks are offering up to 8 percent interest to senior citizens. These banks also reduced the interest rate in the corona virus epidemic. Earlier these banks were offering up to 9% interest rate. Australia vs India: Best Playing 11 for Team India for 2nd Test. Melbourne: Cricket Australia (CA) has announced that the second Test match between Australia and India. The best performing player at the 'Boxing Day' test will be awarded the medal as the Player of the Match, named after the legendary 'Johnny Mullagh'.

The 'Mulagh Medal' is named after the captain of the Tribal team of Australia, who toured Britain in 1868. It was the first organized group of Australian sports teams to tour internationally. Guava Leaf Tea - Miracle Tea for Life. India’s Tour of Australia: Cricket Australia Confirms the Dates And Venues. Non-alcoholic hand sanitizer works against Corona. A new study at Brigham Young University in the US has shown that an alcohol-free hand sanitizer is as effective against the corona as an alcoholic hand sanitizer. University scientists have questioned the use of alcohol-containing hand sanitizers by the CDC, saying that no clear evidence has yet been found of how effective it is against Corona. How to keep yourself warm and safe in these cold Chilling winters? Don't worry Charging kiosk will be installed at 69,000 petrol pumps, said Gadkari. 43 Mobile Apps Banned: Central Government’s Digital Strike on China. New Delhi: The central government on Tuesday imposed a ban on 43 mobile apps involved in activities prejudicial to India’s sovereignty, integrity, defense, and security under section 69A of the Information Security Act.

“Ministry of Electronics and Information Technology has issued the order for blocking the access of these apps by users in India based on the comprehensive reports received from Indian Cyber Crime Coordination Center, Ministry of Home Affairs,” a government press release stated. “Earlier on 29th June 2020, the Government of India had blocked access to 59 mobile apps, and on 2nd September 2020, 118 more apps were banned under section 69A of the Information Technology Act. World's smallest computer developer, Now holds Guinness World Record at 6.

Lessons in Gratitude from our beloved Dr. Abdul Kalam, let's find out. A New Addition to Samsung’s Smartphone Collection. Galaxy M62 will most probably debut next year. It may also come with a Qualcomm chipset, AMOLED display and a large 7,000mAh battery just like its current star performer Galaxy M51. To date, the company’s most powerful performer Galaxy M series Smartphone in 2019 was the Galaxy M40, its successor Galaxy M51 in September 2020. Samsung registered a strong YoY growth of 38 percent in Q3 2020 with record shipments of 12.1 million units. India News, Latest & Breaking India News, Live India News.