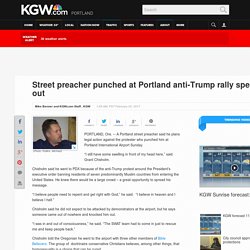 “I still have some swelling in front of my head here,” said Grant Chisholm. Chisholm said he went to PDX because of the anti-Trump protest around the President's executive order banning residents of seven predominantly Muslim countries from entering the United States. He knew there would be a large crowd – a great opportunity to spread his message. Pastor, 3 Others Guilty In Fatal Beating Of Teen Trying To Escape Church. Thank you for your interest in Patheos newsletters! 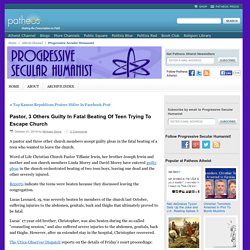 Please enter your email address below and click the "Subscribe" button. Thank you for your subscription. You can visit your Preference Center to complete your profile and see what else we have to offer. We apologize, we were unable to complete your subscription at this time, please try again later. If this error persists please contact us at communications@patheos.com. Pinknews.co. An anti-gay preacher carrying a “you deserve rape” sign, has been attacked with a baseball bat. 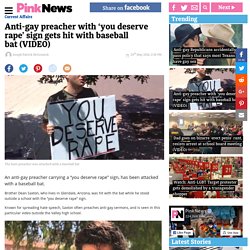 KnowPolitical - Ted Cruz joins surreal anti-gay event with... American Pastor Who Helped Uganda Create ‘Kill The Gays’ Law Will Be Tried For Crimes Against Humanity. Most of us go our entire lives without ever standing trial for crimes against humanity. 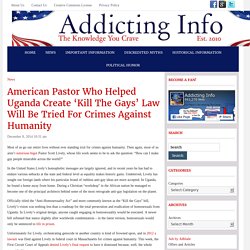 Then again, most of us aren’t notorious bigot Pastor Scott Lively, whose life work seems to be to ask the question: “How can I make gay people miserable across the world?” In the United States Lively’s homophobic messages are largely ignored, and in recent years he has had to endure various setbacks at the state and federal level as equality makes historic gains. Undeterred, Lively has sought out foreign lands where his particular brand of ruthless anti-gay ideas are more accepted. 4 Teachings of Jesus That His Followers (Almost) Never Take Seriously  Christians Make The Least Faithful Spouses, According To A New Survey. Having faith doesn't necessarily mean you're faithful... to your spouse. 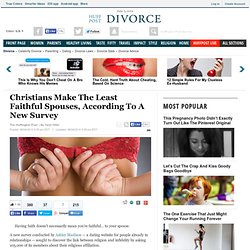 A new survey conducted by Ashley Madison -- a dating website for people already in relationships -- sought to discover the link between religion and infidelity by asking 105,000 of its members about their religious affiliation. It turns out, one in four members described themselves as "born again" Evangelist Christians, making them the least faithful bunch; Catholics comprised the next largest group at 22.75 percent, followed by Protestants (22.7 percent). Christian homeschoolers receive maximum jail time for death of child - National Humanist. In Washington state a Christian homeschooling couple received maximum prison sentences allowable under the law after being found guilty of beating and starving their adopted daughter to death in accord with Biblical based parenting techniques. 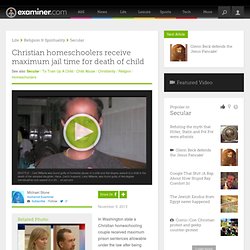 Superior Court Judge Susan Cook showed no mercy to Larry and Carri Williams, found guilty of causing the tragic death of their adopted daughter, Hana, by using Biblical based parenting techniques found in the controversial child-rearing book, To Train up a Child, by Michael and Debi Pearl. Cook sentenced Carri Williams to 37 years in prison. Her husband Larry, convicted of lesser charges, was sentenced to just under 28 years. Both terms are well above the standard sentencing range. Cops: Pastor Burglarized a Parishioner Home ... Again - Rickey Alan Reed charged with stealing pain pills from 2nd home. Applebee’s fires waitress for exposing pastor’s ‘give God 10%’ no-tip receipt. By David EdwardsThursday, January 31, 2013 12:29 EDT. 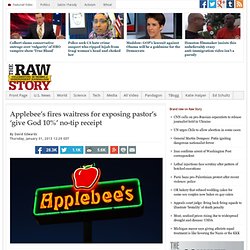 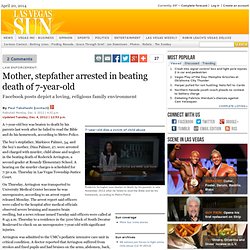 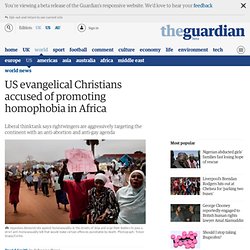 American religious organisations are expanding their operations across the continent, lobbying for conservative policies and laws and fanning homophobia, argues the Boston-based Political Research Associates (PRA). The groups include the American Center for Law and Justice (ACLJ), founded by the televangelist Pat Robertson, which has established bases in Kenya and Zimbabwe. "The religious right [in effect] claims that human rights activists are neocolonialists out to destroy Africa," the report states. George Zimmerman: "I'm Truly Sorry" But It Was "God's Plan" For Trayvon Martin To Die. George Zimmerman on Fox News In an interview with Fox News' Sean Hannity, George Zimmerman discussed fatally shooting an unarmed 17-year-old in a controversial Florida confrontation earlier this year. Zimmerman said he didn't regret what led to Trayvon Martin's death. Pope Benedict’s Commandments. Pastor facing charges over death of neighbor's cat.

BASTROP, Texas -- A Central Texas pastor is being accused of throwing a neighbor's cat off of a bridge. 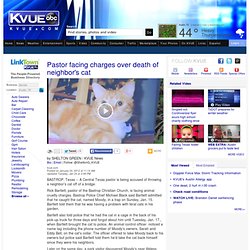 Rick Bartlett, pastor of the Bastrop Christian Church, is facing animal cruelty charges. Bastrop Police Chief Michael Black said Bartlett admitted that he caught the cat, named Moody, in a trap on Sunday, Jan. 15. Bartlett told them that he was having a problem with feral cats in his garden. [AHLQUIST SCREENSHOTS] If by "Christian love" you mean hatred & contempt... (Updates:Police are investigating, we respond to Christian questions, and a little advice to "true" Christians.) Southern Baptist publisher recalls pink Bibles, saying Planned Parenthood benefited from sale. In his recent Under God post entitled “Southern Baptist Decline and God’s Bottom Line,” On Faith editor David Waters asks, “Shouldn’t the church find more faithful ways of measuring its success?