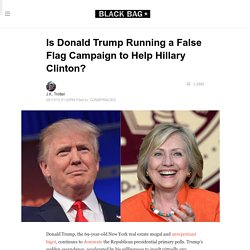 Trump’s sudden ascendance, accelerated by his willingness to insult virtually any ostensible ally within the conservative movement, has left GOP leaders dumbfounded. How did this caricature of a Republican politician, who has never held elected office, and whose personal ideology is remarkably fluid, usurp more experienced, more conservative, and better-funded candidates like Jeb Bush and Scott Walker? Within this vacuum of understanding, an almost-believable conspiracy theory has obtained currency: Donald Trump is in fact a false flag candidate whose actual mission is electing Hillary Clinton as President. To understand the contours of this theory, it’s helpful to understand where it came from. 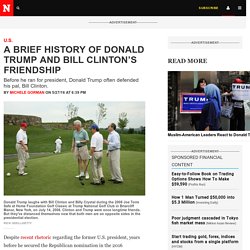 But now as a Republican contender, Trump is being criticized for his ties to the Clintons—Democrats and fellow New Yorkers who celebrated his 2005 marriage to Melania Knauss with him. Hillary Clinton was granted a front-row seat at the ceremony, and her husband later joined the reception at the Mar-a-Lago estate in Palm Beach, Florida. A snapshot taken of the Clintons and the newlywed Trumps has been widely circulated during the primary season; the wedding was dubbed the event that explains the 2016 election.

During the first GOP debate in August, Trump said the couple “had no choice” but to attend his third wedding, because he had donated generously to the their charitable foundation, as well as to Clinton’s Senate campaigns and her first presidential bid. Untitled. Donald Trump’s Curious Clinton Connection. Conspiracy theorists, rejoice! 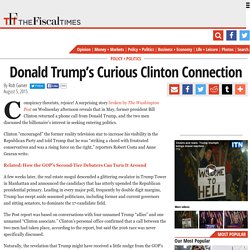 A surprising story broken by The Washington Post on Wednesday afternoon reveals that in May, former president Bill Clinton returned a phone call from Donald Trump, and the two men discussed the billionaire’s interest in seeking entering politics. Clinton “encouraged” the former reality television star to increase his visibility in the Republican Party and told Trump that he was “striking a chord with frustrated conservatives and was a rising force on the right,” reporters Robert Costa and Anne Gearan write.

Donald Trump: the long con revealed. A number of news stories came out over the past 24 hours about spending by the Trump campaign. 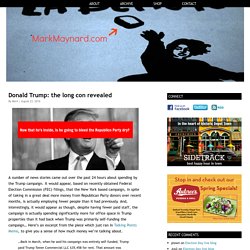 It would appear, based on recently obtained Federal Election Commission (FEC) filings, that the New York based campaign, in spite of taking in a great deal more money from Republican Party donors over recent months, is actually employing fewer people than it had previously. And, interestingly, it would appear as though, despite having fewer paid staff, the campaign is actually spending significantly more for office space in Trump properties than it had back when Trump was primarily self-funding the campaign… Here’s an excerpt from the piece which just ran in Talking Points Memo, to give you a sense of how much money we’re talking about.

The Trump-Pence Long Con. We can all agree that Trump is a con man. 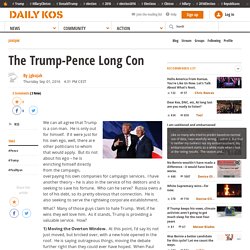 He is only out for himself. If it were just for his own ego, well, there are other politicians to whom that would apply. But its not about his ego – he is enriching himself directly from the campaign, overpaying his own companies for campaign services. Michael Moore On Donald Trump: "They're Being Manipulated By A Con Artist" Is Donald Trump Running a False Flag Campaign to Help Hillary Clinton?