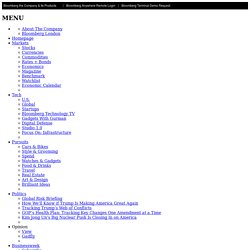 More likely, however, the Kremlin expected the vote to be rigged in favor of Hillary Clinton. According to the leaked report, the Russian military intelligence, GRU, ran a spear-phishing campaign targeting the employees of VR Systems, a voting hardware and software producer. At least one of its employee accounts was apparently compromised. Then, the hackers used the harvested credentials to trap local government officials in charge of organizing elections. Emails, coming credibly from a VR Systems employee, contained malware that would have allowed the GRU (although the report provides no clues as to how the attribution was made) to control the computers of these local officials. QuickTake The Russian Hacking Probe VR doesn't actually make voting machines.

A Top Senate Democrat Reminded Trump That He Once Urged Obama To Act On Climate Change. Donald Trump speaks during a 2016 campaign stop at a metals recycling facility in Monessen, Pa. 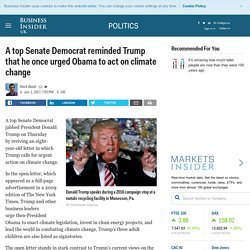 AP Photo/Keith Srakocic A top Senate Democrat jabbed President Donald Trump on Thursday by reviving an eight-year-old letter in which Trump calls for urgent action on climate change. In the open letter, which appeared as a full-page advertisement in a 2009 edition of The New York Times, Trump and other business leaders urge then-President Obama to enact climate legislation, invest in clean energy projects, and lead the world in combating climate change.

This is what Trump’s swamp looks like. By Philip Bump By Philip Bump Politics Analysis Analysis Interpretation of the news based on evidence, including data, as well as anticipating how events might unfold based on past events. 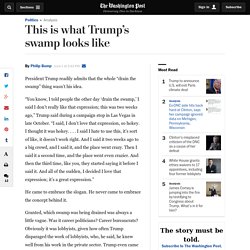 Right to bear arms? Trump accused of plagiarising family crest. It may not be the most dramatic scandal facing Donald Trump this week, but the US president has been accused of branding his US commercial properties with a stolen coat of arms. 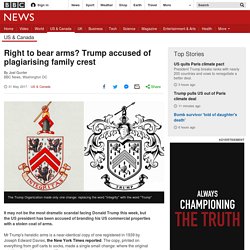 Mr Trump's heraldic arms is a near-identical copy of one registered in 1939 by Joseph Edward Davies, the New York Times reported. The copy, printed on everything from golf carts to socks, made a single small change: where the original said "Integritas", now it says "Trump". Davies was an American diplomat and husband to Marjorie Merriweather Post, who built the Mar-a-Lago resort that now belongs to the president, and where presumably he first saw the coat of arms. The profound and damaging lesson of the Portland attack. Alex Milan Tracy/Sipa via AP Images In the aftermath of 9/11, a New York advertising executive came up with a catchphrase whose peculiar banality has become forever linked to its uselessness: “If you see something, say something.” 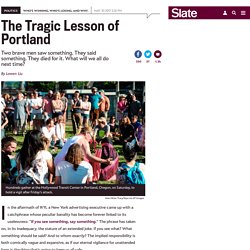 The phrase has taken on, in its inadequacy, the stature of an extended joke. If you see what? What something should be said? Trump Budget Based On $2 Trillion Math Error. One of the ways Donald Trump’s budget claims to balance the budget over a decade, without cutting defense or retirement spending, is to assume a $2 trillion increase in revenue through economic growth. 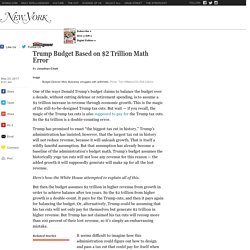 The Video That Suggests Trump Is Suffering from Alzheimer's. The most egregious parts of Donald Trump’s personality—his racism, his misogyny and his lack of scruples or ethics—have been on display for more than four decades. 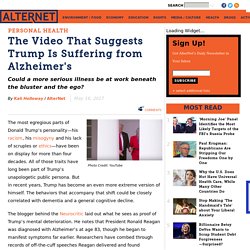 All of those traits have long been part of Trump’s unapologetic public persona. But in recent years, Trump has become an even more extreme version of himself. The behaviors that accompany that shift could be closely correlated with dementia and a general cognitive decline. The blogger behind the Neurocritic laid out what he sees as proof of Trump’s mental deterioration. He notes that President Ronald Reagan was diagnosed with Alzheimer’s at age 83, though he began to manifest symptoms far earlier.

‘Fake but accurate’: Another reason to worry about decision-making at the White House. By Philip Bump By Philip Bump Politics Analysis Analysis Interpretation of the news based on evidence, including data, as well as anticipating how events might unfold based on past events May 15 at 9:25 AM Former national security adviser Michael T. 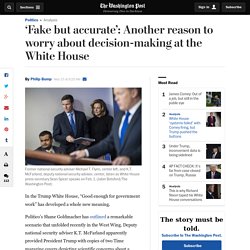 Trump Just Gave The Dictators Of The World Exactly What They Want. Today the Trump administration confirmed that human rights are not a priority. 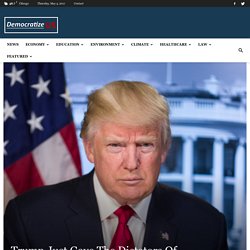 For the first time since Secretary of State Rex Tillerson took his job on February 2, he addressed his whole staff. Tillerson outlined how the Trump administration’s “America First” agenda will translate into foreign policy. According to ABC News, he “distinguished between U.S. ‘values,’ which he described as enduring, and ‘policies,’ which Tillerson said must adapt to the times.” “In some circumstances, if you condition our national security efforts on someone adopting our values, we probably can’t achieve our national security goals,” Tillerson said. Tillerson’s views on human rights as a foreign policy priority has been brought up in the past. • He downplayed the release of an annual report on the state of human rights across the globe in early March.

. • In late March, Tillerson lifted human rights conditions to complete an arms sales to Bahrain. Trump’s Religious Liberty Executive Order Is a Triumph of Fake News. White House priorities revealed in background of Bannon photo. Trump's 100-Day Boasts - FactCheck.org. Summary President Donald Trump did a flurry of TV interviews and held a campaign-style rally to mark his first 100 days, and he left a trail of false, misleading and sometimes puzzling statements in his wake: Trump, who is seeking to renegotiate the North American Free Trade Agreement, falsely claimed that the U.S. has a “$17 billion trade deficit with Canada.” 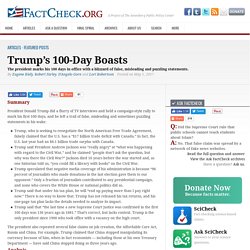 In fact, the U.S. last year had an $8.1 billion trade surplus with Canada.Trump said President Andrew Jackson was “really angry” at “what was happening with regard to the Civil War,” and he claimed “people don’t ask the question, but why was there the Civil War?” Jackson died 16 years before the war started and, as one historian told us, “you could fill a library with books” on the Civil War.Trump speculated that negative media coverage of his administration is because “96 percent of journalists who made donations in the last election gave them to our opponent.”

Analysis Trump marked his 100th day in office on April 29. Fox News. DNC Lawyers Argue DNC Has Right to Pick Candidates in Back Rooms. On April 28 the transcript was released from the most recent hearing at a federal court in Fort Lauderdale, Fla., on the lawsuit filed on behalf of Bernie Sanders supporters against the Democratic National Committee and former DNC chair Debbie Wasserman Schultz for rigging the Democratic primaries for Hillary Clinton.

Throughout the hearing, lawyers representing the DNC and Debbie Wasserman Schultz double down on arguments confirming the disdain the Democratic establishment has toward Bernie Sanders supporters and any entity challenging the party’s status quo. Shortly into the hearing, DNC attorneys claim Article V, Section 4 of the DNC Charter—stipulating that the DNC chair and their staff must ensure neutrality in the Democratic presidential primaries—is “a discretionary rule that it didn’t need to adopt to begin with.” This NYC public bathroom just got a $300,000 makeover. New York has plenty of opulence. In Manhattan, you can order up a $1,000 ice cream dish at Serendipity 3, shell out $7,500 for a bottle of champagne at a nightclub, or spend $75,000 to stay in an extravagant penthouse hotel suite.

But for visitors to Bryant Park, which is nestled between Midtown skyscrapers just beyond the New York Public Library, a certain level of luxury is free to enjoy in a place where you'd least expect it: a public restroom. The park has long been home to a lavish public restroom, but it just became even more lavish thanks to a $300,000 upgrade that was unveiled at a toilet tissue "ribbon" cutting ceremony on Thursday. "At Bryant Park, we strive for perfection and only settle for excellence," Dan Biederman, executive director of Bryant Park Corporation, said in a statement. Cookies are Not Accepted - New York Times. Tillerson: 'I didn't want this job' John McCain just systematically dismantled Donald Trump’s entire worldview. Why conservatives are more likely than liberals to believe false information about threats.

After an electoral season that blurred the line between fact and fantasy, a team of UCLA researchers is offering new evidence to support a controversial proposition: that when it comes to telling the difference between truth and fiction, not all potential voters see it the same way. When “alternative facts” allege some kind of danger, people whose political beliefs are more conservative are more likely than those who lean liberal to embrace them, says the team’s soon-to-be-published study. Conservatives’ vulnerability to accepting untruths didn’t apply equally to all false claims: When lies suggested dangerous or apocalyptic outcomes, more conservative participants were more likely to believe them than when the lie suggested a possible benefit.

The Spy Revolt Against Donald Trump Begins. Ted Cruz: Americans Have No Right To Masturbate. Thank you for your interest in Patheos newsletters! Please enter your email address below and click the "Subscribe" button. Thank you for your subscription. You can visit your Preference Center to complete your profile and see what else we have to offer. We apologize, we were unable to complete your subscription at this time, please try again later. Bernie Sanders is the Worst Presidential Candidate in History, and You and All Your Friends are Idiots. All Politicians Lie. Some Lie More Than Others. Washington — I’m a political fact-checker, which is usually an automatic conversation starter at parties. At Second Debate, Republicans Out-Crazy Trump. Million-Dollar Donors in the 2016 Presidential Race.

How Planned Parenthood 'ended up victims of a crime' in hidden camera case. Not Me. Us. Donald Trump 2016: The One Weird Trait That Predicts Whether You’re a Trump Supporter. Stop laughing, Democrats! As the GOP goes down in flames, your post-Bernie civil war is almost here. It was easy to laugh at that gruesome Republican debate on Thursday night. This is how the GOP imploded: The real story behind the conservative crack-up, and the creation of Donald Trump. Today’s civil war in the GOP has observers scrambling to make sense of the struggle among the current Republican presidential candidates. Which Issues Each Party Debates, or Ignores. Millions of ordinary Americans support Donald Trump. Here's why. Republicans Are Even Blocking Their Own Nominees Now. Students Are Being Rejected From The Polls Because Of North Carolina’s Voter ID Law. It's Over Gandalf. We Need to Unite Behind Saruman to Save Middle Earth from Sauron!

Was the Democratic Primary Just Manipulated, or Was It Stolen? The GOP Is Now Bragging About Voter Suppression. Trumpmemos. A letter to America from Leslie Knope, regarding Donald Trump. The Mike Pence (Donald Trump) Assault On LGBTQ Equality Is Already Underway. Trump just took credit for stopping Ford from moving a plant to Mexico. But it wasn’t planning to. The dark rigidity of fundamentalist rural America: a view from the inside. Trump Surrogate Scottie Nell Hughes Says 'There's No Such Thing as Facts' A decent breakdown of all things real and fake news. North Carolina Republicans complete their 'coup' How many Trump products were made overseas? Here’s the complete list. Fact-checking President-elect Trump’s news conference.

Fact-checking what Donald Trump got wrong in his ABC News interview. House science chairman: 'Get your news directly from the president' Donald Trump Intentionally Lies to Us.