This simple blood test can predict cancer years before symptoms appear. A new type of non-invasive cancer test has just delivered promising results in an early-stage feasibility study, paving the way for a future when we'll be able to get highly accurate cancer screening with a simple blood test. 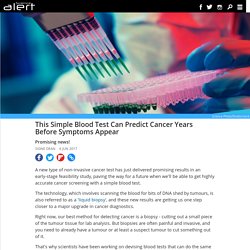 Study Reveals That a Strange Force Is Affecting the Quantum World. In Brief Researchers have uncovered new insights into a unique quantum force called the Casimir effect. 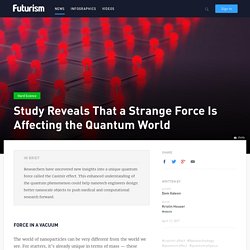 This enhanced understanding of the quantum phenomenon could help nanotech engineers design better nanoscale objects to push medical and computational research forward. Force in a Vacuum The world of nanoparticles can be very different from the world we see. For starters, it’s already unique in terms of mass — these objects are tiny — but more than that, the nano world is governed by a different set of physical laws, which we have taken to calling quantum physics. In a paper published in the journal Physical Review Letters, the researchers observed what’s known as the Casimir effect, a force found between quantum objects inside a vacuum due to fluctuations of electromagnetic waves. Manjavacas and his team studied the Casimir effect as a lateral force that applies itself to rotating quantum objects as a product of collision and came to an interesting conclusion.

Advanced Nanotechnology. Log In - New York Times. 002048 pdf. This is America on drugs: A visual guide. CNN reached out to every state for the latest statistics on drug deaths, with half providing data from 2015. 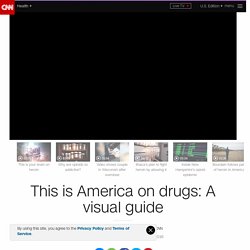 It found that drugs deaths continue to rise rapidly in many states. Epidemiologists in several states blame the increasing number of drug-related deaths on greater use of heroin and synthetic opioids, such as fentanyl. "If you look at the cause of death, we just don't normally see increases like this," said Robert Anderson, the chief of the mortality statistics branch at the National Center for Health Care Statistics at the Centers for Disease Control and Prevention.

Drugs are the leading cause of accidental death in this country. Fatal overdoses surpassed shooting deaths and fatal traffic accidents years ago. For perspective on how fast drug deaths have risen, Anderson said, consider the sharp rise in heart disease in the early half of the 20th century. Heroin-related deaths increased 439% from 1999 to 2014. In Zika fight, Scott haunted by public health cuts, rejection of Medicaid expansion.

TALLAHASSEE — Fighting the Zika virus has become a top priority for Gov. 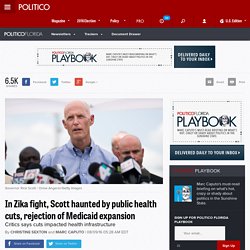 Rick Scott, but the state’s refusal to expand Medicaid coupled with his record of cutting money for county health departments, health clinics and programs for special-needs Floridians has started to complicate his message that the federal government is failing the state in addressing the potential crisis. Scott and his office have steadfastly rejected criticism that any of the cuts have reduced Florida’s front-line capacity to manage the challenges of the fast-spreading virus, saying his budget cuts have only made the state more efficient.

Story Continued Below “We have very good county health departments, and we have a great state health department, and I'm going to continue to allocate the state resources that are necessary,” Scott said Monday, according to The Sarasota Herald-Tribune. “The president and Congress have got to come together,” Scott said, according to the newspaper. Group Behind Planned Parenthood Smear Says it Has '8 to 10' More Videos. ?WT.mc_id=2015-KWP-AUD_DEV&WT. Photo. 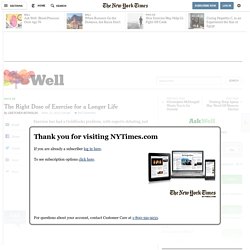 Harvard researchers tested 23 online ‘symptom checkers.’ Most got failing grades. Here’s how they stack up. (Bigstock) Ever asked the Internet what your symptoms mean and gotten a response that seemed wacky or totally off base? 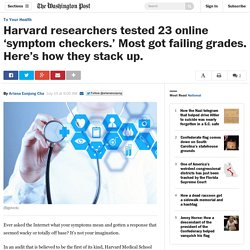 New peanut butter sniff test used to detect Alzheimer's. Think you may be in the early stages of Alzheimer's disease? 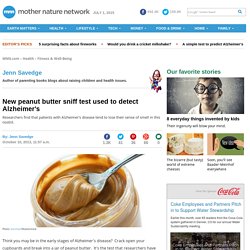 Crack open your cupboards and break into a jar of peanut butter. It's the test that researchers have found may help to indicate early stages of the disease. Researchers at the University of Florida used peanut butter in a recent study to determine patients’ loss of smell in one nostril compared to the other. Study Points to New Culprit in Heart Disease. Reasons to Have More Sex. High-Sugar Diet Can Impair Learning And Memory By Altering Gut Bacteria. The typical American diet is loaded with fat and sugar, and it may be hurting not only our physical health, but also our ability to think clearly. 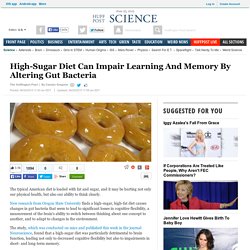 New research from Oregon State University finds a high-sugar, high-fat diet causes changes in gut bacteria that seem to lead to significant losses in cognitive flexibility, a measurement of the brain's ability to switch between thinking about one concept to another, and to adapt to changes in the environment. The study, which was conducted on mice and published this week in the journal Neuroscience, found that a high-sugar diet was particularly detrimental to brain function, leading not only to decreased cognitive flexibility but also to impairments in short- and long-term memory. “We’ve known for a while that too much fat and sugar are not good for you,” Dr. Kathy Magnusson, a biomedical scientist at the university and the study's lead author, said in a statement.

As Magnusson suggests, the findings aren't entirely surprising. The Experiment. The world's most advanced Prosthetic Hand - bebionic. Study: IUD use effective for pregnancy prevention. Women are more likely to choose to get IUDs and other highly effective contraceptives at family planning clinics if the clinicians there have been educated about these methods, according to a new study. 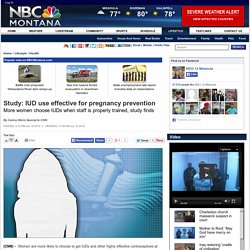 The increase in the use of long-acting reversible contraceptives -- IUDs (intrauterine devices) and single-rod hormonal implants in the arm -- were associated with nearly 50percent fewer unintended pregnancies among the women in the study. Long-acting reversible contraceptives (LARCs) are considered the most effective method of contraception, associated with failure rates of less than 1 percent, whereas birth control pills and condoms have failure rates of 9 percent and 18 percent, respectively. One Phone Call Showed Me How People Dismiss Black Humanity When They Defend Police. WASHINGTON -- Interviewing a source can be an eye-opening and harrowing experience, especially when speaking to someone who has been victimized -- or someone who feels her people have been wronged. 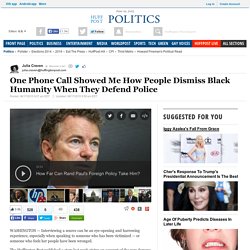 The Huffington Post published a story last week giving an account of the now-famous McKinney, Texas, pool party police debacle, based in part on an interview with one of the partygoers who had a gun pulled on him. But the real shock came when a resident who wasn't even at the party emailed me to say that I had it all wrong. “The story you just posted where you interviewed [the partygoer] is ridiculously inaccurate. ‘Freedom’ Fries: Texas Repeals Ban On Deep Fryers In Schools. Follow CBSDFW.COM: Facebook | Twitter. Eat me! This is your brain on sugar. In her new book, "Why Diets Fail," Columbia University neuroscientist and research psychologist Nicole Avena reveals that sugar is addictive; which may not come as a surprise to anyone who has suffered the unrelenting whine of a stubborn sweet tooth.

In experiments with rats, she found that overeating foods like sugar can actually result in changes in the brain that resemble addiction. Avena explains how sugar gives us a hit of dopamine – one of the key ingredients in the brain’s reward system. Dopamine is the reason that alcohol, tobacco, and heroine can be so irresistible to many. Marriage?? Young Americans Aren't Even Shacking Up. You’ve probably heard that marriage among young adults has been on the decline, but a new Gallup poll finds that the percentage of 18-to-29-year-olds living with a partner has flatlined in recent years. “This means that not only are fewer young adults married, but also that fewer are in committed relationships,” Gallup’s Lydia Saad wrote Monday. “As a result, the percentage of young adults who report being single and not living with someone has risen dramatically in the past decade.” Related: The Bad News About All the Singles in America That percentage has risen from 52 percent in 2004 to 64 percent last year, Gallup says.

The data doesn’t necessarily mean young adults are avoiding relationships entirely. 50 hospitals charge uninsured more than 10 times cost of care, study finds. Fifty hospitals in the United States are charging uninsured consumers more than 10 times the actual cost of patient care, according to research published Monday. All but one of the facilities are owned by for-profit entities and the largest number of hospitals — 20 — are in Florida. For the most part, researchers said, the hospitals with the highest markups are not in pricey neighborhoods or big cities, where the market might explain the higher prices.

Topping the list is North Okaloosa Medical Center, a 110-bed facility in the Florida Panhandle about an hour outside of Pensacola. Uninsured patients are charged 12.6 times the actual cost of patient care. Community Health Systems operates 25 of the hospitals on the list. “They are price-gouging because they can,” said Gerard Anderson, a professor at the Johns Hopkins Bloomberg School of Public Health, co-author of the study in Health Affairs. 40 years of a changing American diet, in one massive chart. You don't eat the way your parents did. You can probably see that by just glancing at a cookbook from the 1960s or '70s. (So much Jell-O. So much canned food.)

Infections Of The Mind: Why Anti-Vaxxers Just ‘Know’ They’re Right. 10 Surprising Benefits Of Earl Grey Tea You Never Knew. How much salary does a doctor make? - Business Insider. 30 Unhealthy Foods You Mistake As Healthy and Their Surprising Swaps - Early To Rise. Healthy Holistic Living: Sugar Vs. High Fructose Corn Syrup - What's the Difference? Let's go shopping on Healthcare.gov with Ted Cruz. Being Gay Not a Choice: Science Contradicts Ben Carson. Procrsmed00338-0007.pdf. 5 Myths About Suicide, Debunked. By Stephanie Pappas, Senior Writer | March 27, 2014 12:55pm ET Credit: Oleg Golovnev | shutterstock Suicide is the 10th-leading cause of death in the United States, according to the most recent data from the Centers for Disease Control and Prevention.

Scientists tallied up all the advice on Dr. Oz's show. Half of it was baseless or wrong. The 8 most bogus health claims of 2014. 59 ways to live a longer life. For healthier hearts, focus on sugar, not salt, say researchers. Addiction to Cheese is Real Thanks to Casomorphins. Gut Bacteria and Probiotics. Study Points to Tool Against Obesity? How to Live Longer. No, Seriously, How Contagious Is Ebola? Infographic Shows The Differences Between The Diseases We Donate To, And The Diseases That Kill Us. The mystery of the falling teen birth rate. Senses and Non-Sense: 7 Odd Hallucinations. 16 Reasons To Have Daily Sex. Measles cases in US soar to 20-year high as travelers infect unvaccinated locals. Lonely people post personal details on Facebook. Monitor for sunburn risk goes on sale. How often do you really need to shower?

Why 'diet' food is so unsatisfying. Study: New discovery on how infertility occurs - and why caffeine plays a role - National Health News. Research holds promise of harnessing life-extending benefits of spartan diet. Praise the lard? Study links church to obesity - Health - Diet and nutrition. England 'healthier than the US' A cure for the common cold may finally be achieved as a result of a remarkable discovery in a Cambridge laboratory - Science, News.