I watched Alex Jones give his viewers health advice. Here’s what I learned. The 5 Awkward Times Experts Shut Down News Anchors By Being Experts. Carl Hart: The 12th graders said that they smoked marijuana recently. 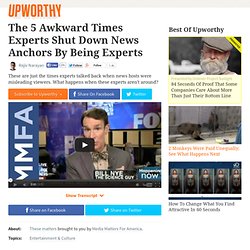 Today, that number is down to 22%. Fox News Coverage of Climate Change Is Now Only 72% Inaccurate. Fox News expert on solar energy: Germany gets "a lot more sun than we do." [VIDEO] Photo by Matthias Hiekel/AFP/Getty Images Thanks to Fox News and its expert commentators, millions of Americans now understand the real, hidden reason why Germany's solar-energy industry is so much further along than ours. 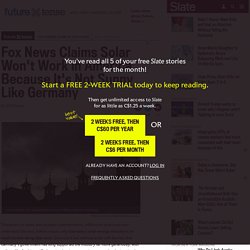 Turns out it has nothing to do with the fact that Germany's government has long supported the industry far more generously, with policies like feed-in tariffs that stimulate investment in green technologies. No, the real reason is much simpler, explained a trio of journalists on Fox & Friends: It's always sunny in Germany! "The industry's future looks dim," intoned host Gretchen Carlson at the beginning of the segment, which was preserved for posterity by the liberal blog Media Matters for America. She and her co-host went on to ridicule Obama's "failed" solar subsidies, adding, "The United States simply hasn't figured out how to do solar cheaply and effectively. Fairleigh Dickinson PublicMind Poll Shows Fox News Viewers Less Informed on Major News Stories. Fox and Friends. Bill Nye on Fox: "There's A Lot More Science Behind" Idea Of Global Warming Creating Extreme Weather "Than Saying It's Not.

Phone hacking: News of the World reporter's letter reveals cover-up. Rupert Murdoch, James Murdoch and their former editor Andy Coulson all face embarrassing new allegations of dishonesty and cover-up after the publication of an explosive letter written by the News of the World's disgraced royal correspondent, Clive Goodman. 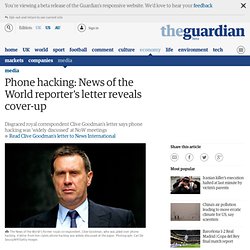 In the letter, which was written four years ago but published only on Tuesday, Goodman claims that phone hacking was "widely discussed" at editorial meetings at the paper until Coulson himself banned further references to it; that Coulson offered to let him keep his job if he agreed not to implicate the paper in hacking when he came to court; and that his own hacking was carried out with "the full knowledge and support" of other senior journalists, whom he named. The claims are acutely troubling for the prime minister, David Cameron, who hired Coulson as his media adviser on the basis that he knew nothing about phone hacking. 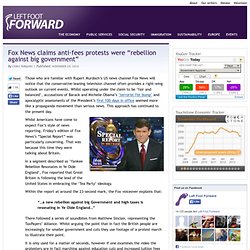 Whilst operating under the claim to be ‘fair and balanced’, accusations of Barack and Michelle Obama’s ‘terrorist fist bump’ and apocalyptic assessments of the President’s first 100 days in office seemed more like a propaganda movement than serious news. This approach has continued to the present day. Whilst Americans have come to expect Fox’s style of news reporting, Friday’s edition of Fox News’s “Special Report” was particularly concerning. That was because this time they were talking about Britain.

In a segment described as ‘Yankee Rebellion Resonates in Ye Olde England’, Fox reported that Great Britain is following the lead of the United States in embracing the ‘Tea Party’ ideology. Within the report at around the 23-second mark, the Fox voiceover explains that: Roger Ailes' Secret Nixon-Era Blueprint for Fox News. I'm pretty sure that the United States of America had its greatest rise (in the recent era) during the Reagan administration, who was a Republican (and he brought peace with the Russians, let's not forget).

I'm also pretty sure that referring to the Bush jr administration, and more specifically one chapter in that administration, AND bringing in race as a cheap shot (Bush is quite stupid, but seriously, are you calling him a racist? ...low... ), is not the way to review the history of a party. How Roger Ailes Built the Fox News Fear Factory. Robert F. Kennedy Jr.: Regulators Reject Proposal That Would Bring Fox-Style News to Canada. Jon Stewart Reads Off Laundry List of False Statements by 'Lying Dynasty' Fox News.

You seem to be under the impression that this is about winning. 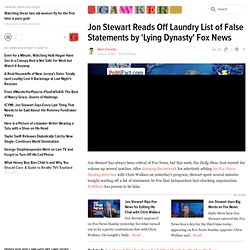 This is about intellectual honesty, and hypocracy (sp?). Sure your guys are winning. At what price to the greater good. I personally don't give a shit. Again, JS is a comedian. Troooollololololol haha. Jon Stewart Reads Off Laundry List of False Statements by 'Lying Dynasty' Fox News. GOING GREEN: How News Corp. Cashes In On Both Sides Of The Climate Fight. "Climate change poses clear, catastrophic threats," Rupert Murdoch declared in a 2007 speech announcing News Corp.'s new climate initiative. Fox Nation readers confuse Onion article with real news. By David EdwardsFriday, November 26, 2010 13:32 EDT UPDATE: Editors scrub article, comments from site It was George Orwell, who first coined the term “memory hole,” in his classic novel 1984. 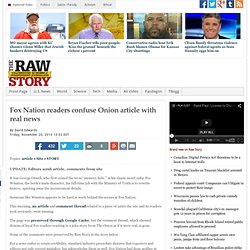 For Winston, the book’s main character, his full-time job with the Ministry of Truth is to rewrite history, spiriting away the inconvenient details. Someone like Winston appears to be hard at work behind the scenes at Fox Nation. This morning, an article and comment thread related to a piece of satire the site and its readers took seriously, went missing. The page was preserved through Google Cache, but the comment thread, which showed dozens of loyal Fox readers reacting to a joke story from The Onion as if it were real, is gone.

Some of the comments were preserved by Raw Story in the story below. For a news outlet to retain credibility, standard industry procedure dictates that reporters and editors not only correct mistakes, but acknowledge them as well. Original report follows… Fox News executive admits his attempt to link Obama to socialism was a lie. Fox & Friends Segment Replaces SOTU Audience Laughter And Applause With Cricket Sound Effects. Fox News: Biggest Ratings Loser Of The New Year - Glenn Beck Leads The Way Down. Hopefully this means that television viewers are getting tired of brazenly biased news coverage that foments division, spreads disinformation, and insults the intelligence of the audience. 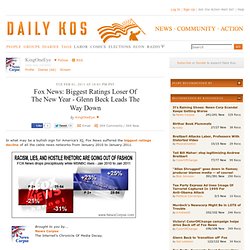 The past year has seen some of the most blatant propagandizing by the disreputable crew at Fox. They were caught deliberately lying about global warming and health care. They were exposed for donating millions of dollars to right-wing politicos. Their role in inciting violence became a headline story itself. "We Were a Stalin-esque Mouthpiece for Bush" February 10, 2011 | Like this article? 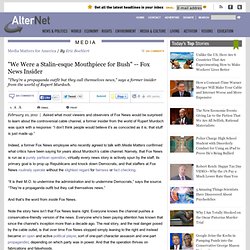 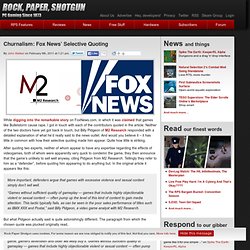 While digging into the remarkable story on FoxNews.com, in which it was claimed that games like Bulletstorm cause rape, I got in touch with each of the contributors quoted in the article. Neither of the two doctors have yet got back in touch, but Billy Pidgeon of M2 Research responded with a detailed explanation of what he’d really said to the news outlet.

And would you believe it – it has little in common with how their selective quoting made him appear. Quite how little is striking. After quoting two experts, neither of whom appear to have any expertise regarding the effects of videogames, both of whom were apparently very quick to condemn the game, they then announce that the game’s unlikely to sell well anyway, citing Pidgeon from M2 Research. More important, defenders argue that games with excessive violence and sexual content simply don’t sell well. But what Pidgeon actually said is quite astonishingly different. . “1. Fair and Balanced? Laughable... UPDATED: Fox Reverses Poll Results To Falsely Claim Most Americans Favor Ending Collective Bargaining. February 23, 2011 9:03 am ET — 188 Comments On Fox & Friends , co-host Brian Kilmeade claimed, along with an on-screen graphic, that a recent USA Today /Gallup poll found that "61 percent" of Americans are in favor of taking away collective bargaining rights from public unions.

In fact, Fox aired the results of the poll completely backward: the Gallup poll found that 61 percent of Americans are opposed to taking away collective bargaining rights. Rupert Murdoch and the BSkyB takeover: how powerful will it make him? Rupert Murdoch's plan to takeover BSkyB looks set to go ahead, now that culture secretary Jeremy Hunt has OK'd News Corporation's plan to spin off Sky News. The news subsidiary will be spun off into a new publicly listed company called Newco. That would then allow the proposed £8bn purchase of the 61% of BSkyB it does not already ownNews Corporation is to license the Sky News brand to the operation for seven years, providing an incentive to renew a second funding deal. buy up the rest of BSkyB - he presently controls 39.1% of the company which is increasingly dominating British broadcasting. Earlier this year, a memo signed by a coalition of British media companies, including the Guardian, asked then Business secretary Vince Cable to refer the proposed takeover to Ofcom.

Cable later had to resign. So, just how powerful would Murdoch become in the UK?