Skeptical Science Study Finds 97% Consensus on Human-Caused Global Warming in the Peer-Reviewed Literature. A Message to Breitbart from Weather.com. Aberfan: The mistake that cost a village its children. Documentary film-makers face decades in prison for taping oil pipeline protests. Two documentary film-makers are facing decades in prison for recording US oil pipeline protests, with serious felony charges that first amendment advocates say are part of a growing number of attacks on freedom of the press. 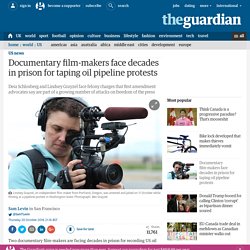 This Temperature Timeline Of Earth Shows Exactly How Nonsensical Climate-Change Deniers Really Are. DIVIDED AMERICA: Temperatures Rise, US Splits. Climate change is more about tribalism, or who we identify with politically and socially, Nisbet and other experts say. 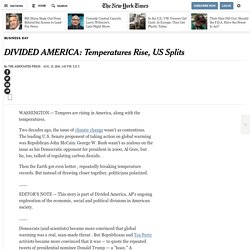 Liberals believe in global warming, conservatives don't. Dave Woodard, a Clemson University political science professor and GOP consultant, helped South Carolina Republican Bob Inglis run for the U.S. House (successfully) and the Senate (unsuccessfully). ‘The most singular of all the things that we have found': Clouds study alarms top scientist. Ice Age Maps showing the extent of the ice sheets. Back to Don's Maps The last great ice age began around 120 000 years ago. 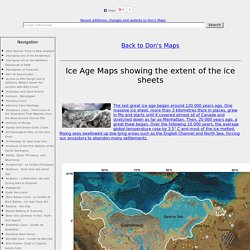 One massive ice sheet, more than 3 kilometres thick in places, grew in fits and starts until it covered almost all of Canada and stretched down as far as Manhattan. Then, 20 000 years ago, a great thaw began. Over the following 10 000 years, the average global temperature rose by 3.5° C and most of the ice melted. The Earth Has Lungs. Watch Them Breathe. – Phenomena: Curiously Krulwich. House Republicans seek to open up national forests to mining and logging. Congress is to consider two bills that would allow states to hand over vast tracts of federal land for mining, logging or other commercial activities – just weeks after the arrest of an armed militia that took over a wildlife refuge in Oregon in protest at federal oversight of public land. 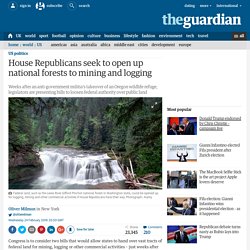 The legislation, which will be presented to the House committee on natural resources on Thursday, would loosen federal authority over parts of the 600m acres (240m hectares), nearly one-third of the land mass of the US, it administers. 01 orp cascadia. Congressman doubles down, accuses NOAA scientists of doctoring results. On Monday, we covered a series of requests (culminating in a subpoena) from Texas Congressman Lamar Smith (R). 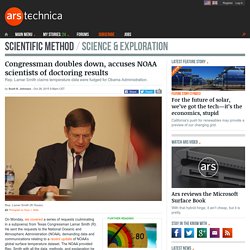 He sent the requests to the National Oceanic and Atmospheric Administration (NOAA), demanding data and communications relating to a recent update of NOAA’s global surface temperature dataset. The NOAA provided Rep. Global Warming and Climate Change skepticism examined. We’re Running out of Water. Study: The Gulf Stream system may already be weakening. That's not good. In the 2004 disaster film The Day After Tomorrow, climate change causes a major disruption of ocean currents in the Atlantic Ocean, which in turn brings about a sudden ice age in New York City. 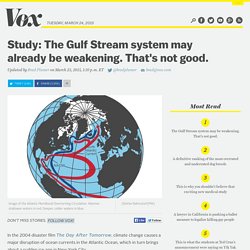 That scenario was ridiculous and overwrought. Still, the underlying idea that global warming could mess with some important ocean circulation systems actually isn't that far-fetched. The melting of Antarctica was already really bad. It just got worse. A satellite view of Antarctica is seen in this undated NASA handout photo obtained by Reuters on Feb. 6, 2012. 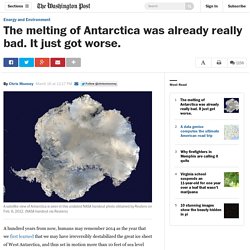 (NASA handout via Reuters) A hundred years from now, humans may remember 2014 as the year that we first learned that we may have irreversibly destabilized the great ice sheet of West Antarctica, and thus set in motion more than 10 feet of sea level rise. Meanwhile, 2015 could be the year of the double whammy — when we learned the same about one gigantic glacier of East Antarctica, which could set in motion roughly the same amount all over again. Students launch desktop recycler that turns pop bottles into 3D printer plastic.

Three engineering physics students at the University of British Columbia have developed a desktop plastic recycler and extruder that turns plastic waste into the material needed for 3D printing. 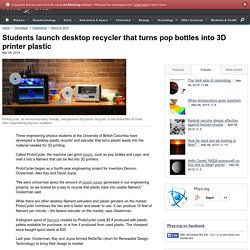 Called ProtoCycler, the machine can grind plastic, such as pop bottles and Lego, and melt it into a filament that can be fed into 3D printers. ProtoCycler began as a fourth-year engineering project for inventors Dennon Oosterman, Alex Kay and David Joyce. "We were concerned about the amount of plastic waste generated in our engineering projects, so we looked for a way to recycle that plastic back into usable filament," Oosterman said. While there are other desktop filament extruders and plastic grinders on the market, ProtoCycler combines the two and is faster and easier to use.

Bad news: Brazil is losing huge chunks of Amazon rainforest again. Brazil's battle against deforestation was one of the biggest environmental success stories of the last decade. 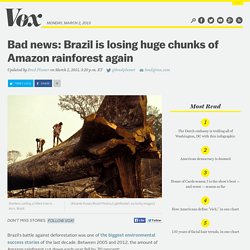 Between 2005 and 2012, the amount of Amazon rainforest cut down each year fell by 70 percent: (Nepstad et al, 2014) Interaction of ocean oscillations caused 'false pause' in global warming. UNIVERSITY PARK, Pa.-- The recent slowdown in climate warming is due, at least in part, to natural oscillations in the climate, according to a team of climate scientists, who add that these oscillations represent variability internal to the climate system. 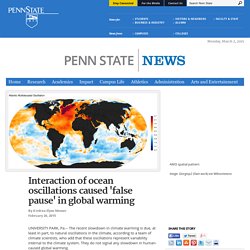 They do not signal any slowdown in human-caused global warming. "We know that it is important to distinguish between human-caused and natural climate variability so we can assess the impact of human-caused climate change on a variety of phenomena including drought and weather extremes," said Michael Mann, Distinguished Professor of Meteorology, Penn State. "The North Atlantic and North Pacific oceans appear to be drivers of substantial natural, internal climate variability on timescales of decades.

" Mann, Byron A. Steinman, assistant professor of geological sciences, University of Minnesota-Duluth and a former Penn State National Science Foundation postdoctoral fellow and Penn State researcher Sonya K. This is the dumbest thing that happened on the Senate floor today. Get ready for it: Yep, that's Sen. James Inhofe, Republican from Oklahoma, throwing a snowball to prove that global warming isn't really happening. "We keep hearing that 2014 has been the warmest year on record," Inhofe said. "So I ask the chair," — referring to Sen. Bill Cassidy (R-LA) — "Do you know what this is?

Inhofe, by the way, isn't some random nut off the street. Leading Climate Denier and Harvard Scientist Took $1.2 Million Bribe From Oil Companies. Wei-Hock Soon, an aerospace engineer and a part-time employee at the Harvard-Smithsonian Center for Astrophysics is one of the few respected scientists who spoke against the general consensus that human activity is a significant contributor to climate change. He has published 11 papers on climate change since 2008. However, it was recently shown that he received $1.2 million from oil companies in exchange for his “science”. According to leaked documents, the papers were simply “deliverables” that he completed in exchange for their money. He used the same term to describe a testimony he prepared for Congress. Science against money. Sundarbans islands disappear into sea, India, Bangladesh unprepared for 13 million-person exodus.

Researchers show Earth's magnetic reversal occurs faster than previously thought. A study by researchers from UC Berkeley, Columbia University, Italy and France shows that the most recent reversal of Earth’s magnetic field occurred in fewer than 100 years, which is much more rapidly than previously believed. Courtney Sprain, campus graduate student, and Paul Renne, director of the Berkeley Geochronology Center and a campus earth and planetary sciences professor, worked with overseas researchers to study the magnetic properties of sediments in Italy. Published this summer, the research investigated the last magnetic reversal, which happened 786,000 years ago.