Amputee Gamer Gets Bionic Arm That Has Its Own Drone. When biological scientist James Young was pulled under a train in London in 2012, he feared the worst. 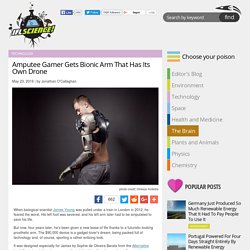 Creation of first practical silicon-based laser: Researchers take giant step towards 'holy grail' of silicon photonics. A group of researchers from the UK, including academics from Cardiff University, has demonstrated the first practical laser that has been grown directly on a silicon substrate. 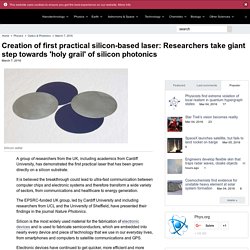 It is believed the breakthrough could lead to ultra-fast communication between computer chips and electronic systems and therefore transform a wide variety of sectors, from communications and healthcare to energy generation. The EPSRC-funded UK group, led by Cardiff University and including researchers from UCL and the University of Sheffield, have presented their findings in the journal Nature Photonics. Silicon is the most widely used material for the fabrication of electronic devices and is used to fabricate semiconductors, which are embedded into nearly every device and piece of technology that we use in our everyday lives, from smartphones and computers to satellite communications and GPS.

Google's new robot is now even more human - Feb. 24, 2016. Atlas, the humanoid robot created by Alphabet (GOOGL, Tech30) company Boston Dynamics, can open doors, balance while walking through the snow, place objects on a shelf and pick itself up after being knocked down. 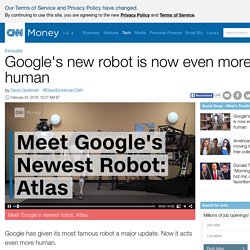 The new version of Atlas is smaller and more nimble than its predecessor. At 5-feet, 9-inches tall and 180 pounds it's about 7 inches shorter and 120 pounds lighter than the first version. It's fully mobile too -- the previous version had to be tethered to a computer. Atlas was created to perform disaster recovery in places unsafe for humans, such as damaged nuclear power plants. The robot made its debut in 2013 during a competition held by the Defense Advanced Research Projects Agency. Librarian of Congress grants limited DRM-breaking rights for cars, games, phones, tablets, and remixers. Every three years, the Librarian of Congress allows the public to request exemptions to a law that makes it a felony to break a digital lock, even on on a device that you own, and which you are breaking for a lawful purpose. 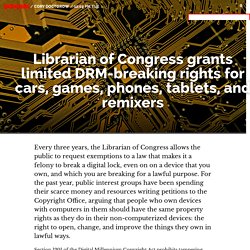 For the past year, public interest groups have been spending their scarce money and resources writing petitions to the Copyright Office, arguing that people who own devices with computers in them should have the same property rights as they do in their non-computerized devices: the right to open, change, and improve the things they own in lawful ways. Scientists Create Holograms that you can Touch.

A scientist flicks on a switch. 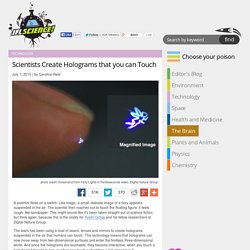 Like magic, a small, delicate image of a fairy appears, suspended in the air. The scientist then reaches out to touch the floating figure: it feels rough, like sandpaper. This might sound like it's been taken straight out of science fiction, but think again, because this is the reality for Yoichi Ochiai and his fellow researchers at Digital Nature Group. Meet the e-voting machine so easy to hack, it will take your breath away. Virginia election officials have decertified an electronic voting system after determining that it was possible for even unskilled people to surreptitiously hack into it and tamper with vote counts. 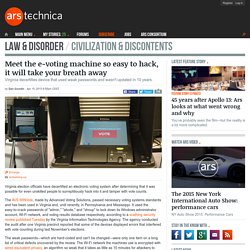 The AVS WINVote, made by Advanced Voting Solutions, passed necessary voting systems standards and has been used in Virginia and, until recently, in Pennsylvania and Mississippi. It used the easy-to-crack passwords of "admin," "abcde," and "shoup" to lock down its Windows administrator account, Wi-Fi network, and voting results database respectively, according to a scathing security review published Tuesday by the Virginia Information Technologies Agency.

The agency conducted the audit after one Virginia precinct reported that some of the devices displayed errors that interfered with vote counting during last November's elections. Review: Anonabox or InvizBox, which Tor router better anonymizes online life? A while back, we covered the controversy over a few Kickstarter projects aiming to provide something in increasing demand as of late: a foolproof way to connect any Wi-Fi capable device to the Tor anonymized network. 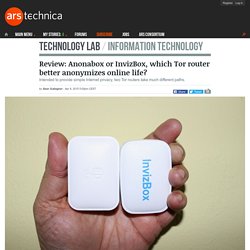 Of Course a Training Montage of Our Best Robots is Hilariously Creepy. Researchers create glasses-free 3D display with tiny spherical lenses. Several industries have tried and failed to get consumers excited about 3D, but it simply hasn’t taken hold yet. 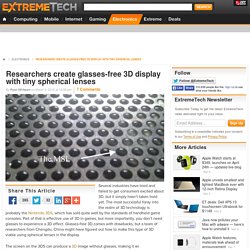 The most successful foray into the realm of 3D technology is probably the Nintendo 3DS, which has sold quite well by the standards of handheld game consoles. Part of that is effective use of 3D in games, but more importantly, you don’t need glasses to experience a 3D effect. Glasses-free 3D comes with drawbacks, but a team of researchers from Chengdu, China might have figured out how to make this type of 3D viable using spherical lenses in the display. The screen on the 3DS can produce a 3D image without glasses, making it an “autostereoscopic” screen. Google’s quantum computer just flunked its first big test. When the D-Wave 2 was first released last year, it was accompanied by a tidal wave of hype. 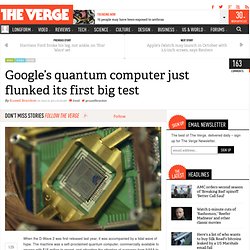 The machine was a self-proclaimed quantum computer, commercially available to anyone with $15 million to spend, and attracting the attention of everyone from NASA to the NSA. One of the computer’s buyers was Google, which launched a new lab to test the device's powers more rigorously than they’d ever been tested before. This October, the lab announced a major discovery, providing stronger evidence for quantum effects within the D-Wave 2 than anyone had previously found. IBM researchers just built the best graphene-based circuit yet: it sends text messages. IBM researchers have created a graphene-based circuit that they say performs 10,000 times better than existing options; It was reliable enough that they used it to send and receive a text message. 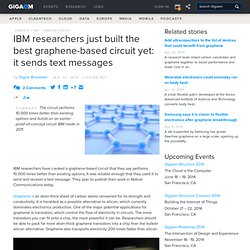 They plan to publish their work in Nature Communications today. Graphene is an atom-thick sheet of carbon atoms renowned for its strength and conductivity. It is heralded as a possible alternative to silicon, which currently dominates electronics production. One of the major potential applications for graphene is transistors, which control the flow of electricity in circuits. Researchers crack the world’s toughest encryption by listening to the tiny sounds made by your computer’s CPU. Security researchers have successfully broken one of the most secure encryption algorithms, 4096-bit RSA, by listening — yes, with a microphone — to a computer as it decrypts some encrypted data. The attack is fairly simple and can be carried out with rudimentary hardware. Tech giants form AllSeen Alliance to standardize the Internet of Things. Home appliances, cars and computers could soon be talking to one another thanks to an open source framework that has the backing of consumer electronics manufacturers in a new industry alliance.

The AllSeen Alliance is supported by the Linux Foundation. Its members include Cisco, D-Link, Haier, LG Electronics, Qualcomm, Panasonic and Sharp. The software framework, originally developed by Qualcomm as a project called AllJoyn, is intended to allow systems to seamlessly discover, connect and interact with each other regardless of their manufacturer or the operating system they are using, the Linux Foundation said. The alliance members will contribute engineering resources and software to the framework, allowing software developers, manufacturers and service providers to make interoperable services and devices. The framework runs on software platforms such as Linux, Android, iOS, and Windows, including embedded variants. New qubit control bodes well for future of quantum computing. The fanless spinning heatsink: more efficient and immune to dust.

There’s a fundamental flaw with fan-and-heatsink cooling systems: no matter how hard the fan blows, a boundary layer of motionless, highly-insulating air remains on the heatsink. You can increase the size of the heatsink and you can blow more air, but ultimately the boundary layer prevents the system from being efficient; it’s simply a physical limitation of fan-and-heatsink cooling systems in specific, and every kind of air-cooled heat exchanger in general, including air conditioning and refrigeration units. Russian scientists find a way to analyze substances in a matter of seconds. Russian scientists have developed a device that can analyze the composition of a substance through its container.

Biological computers come closer to reality. London: Scientists have claimed that they can build some of the basic components for digital devices out of bacteria and DNA, suggesting a new generation of biological computing devices. Nokero Updates Solar Powered Light Bulb. Back in June we first learned about Nokero and its desire to bring solar powered light bulbs to developing nations. The company’s first model, the N100, looks to have done well enough – 50,000 produced thus far – that Nokero is now coming out with an improved model it calls the N200.

Android (The real thing, not the phone) P-III autopsy « Sciency stuff. For teaching a course I needed to take a closer look at a CPU. I asked around and got my hands on an old P-III Coppermine that was about to get thrown out.