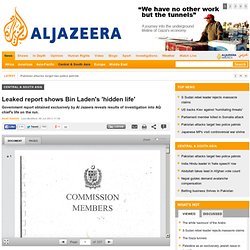 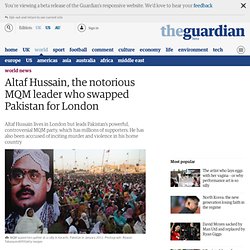 Its headquarters are in Karachi, Pakistan's so called "city of dreams" – a massive, sprawling conurbation with 20 million residents seeking a better life. And yet there was one vacancy recently that Geo TV could not fill. Prescription Strike. The CIA’s use of vaccine programs as cover for covert operations in Pakistan has endangered aid workers and undermined the fight against polio “We went into a camp to inoculate some children.

We left the camp after we had inoculated the children for polio, and this old man came running after us and he was crying. He couldn’t see. We went back there, and they had come and hacked off every inoculated arm. Mapping the Elections. Issue IV The TQ team has compiled data (see the spreadsheet below) and more importantly–district level descriptions–to provide some context for all the numbers floating around about the upcoming elections. 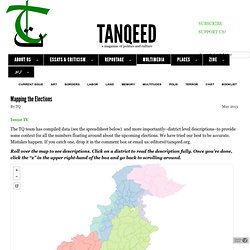 We have tried our best to be accurate. Mistakes happen. If you catch one, drop it in the comment box or email us: editors@tanqeed.org. The Tragedy of Pakistan. The Taliban want to end democracy in Pakistan. 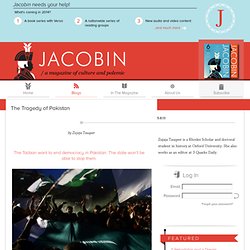 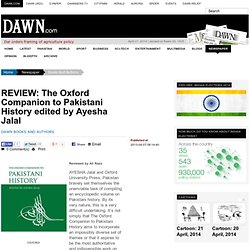 By its very nature, this is a very difficult undertaking. It’s not simply that The Oxford Companion to Pakistani History aims to incorporate an impossibly diverse set of themes or that it aspires to be the most authoritative and indispensible work on the subject. Rather, as Jalal alludes in her preface, the difficulty in compiling this volume lies in deciphering what ‘Pakistani history’ really is. Where should it be located? To an extent, these questions can legitimately be asked of all national histories. The Good Samaritans? Last month, when Pakistan’s Prime Minister, Raja Pervaiz Ashraf, got a call from the Army House just before midnight, he did not think it was unusual. Musharraf’s mirage. THE general is back, and this time not on horseback. 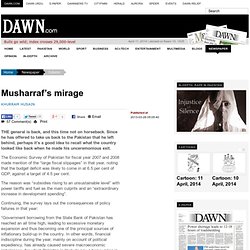 Since he has offered to take us back to the Pakistan that he left behind, perhaps it’s a good idea to recall what the country looked like back when he made his unceremonious exit. The Economic Survey of Pakistan for fiscal year 2007 and 2008 made mention of the “large fiscal slippages” in that year, noting that the budget deficit was likely to come in at 6.5 per cent of GDP, against a target of 4.5 per cent. The reason was “subsidies rising to an unsustainable level” with power tariffs and fuel as the main culprits and an “extraordinary increase in development spending”. PTI settles ideologically - Harris Khalique.

Side-effect The writer is a poet and author based in Islamabad. 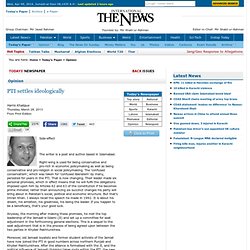 Right-wing is used for being conservative and pro-rich in economic policymaking as well as being conservative and pro-religion in social policymaking. The ‘confused conservatism’, which was taken for ‘confused liberalism’ by many, persisted for years in the PTI. That is now changing. Their leader made six personal promises, which in effect means that he will fulfil the obligations imposed upon him by Articles 62 and 63 of the constitution if he becomes prime minister, rather than announcing six succinct changes his party will bring about in Pakistan’s social, political and economic structure. (Saving...) Literate, NOS, The News International. Festival The LLF city People listening to authors, buying books and engaging with ideas without a thought for a bomb blast — this was a new Lahore By Sabahat Zakariya Fears of a Lahori elite schmoozefest coupled with the counterintuitive idea of a festival about reading, essentially a solitary activity for solitary people, had me sceptical about the first ever Lahore Literary Festival. 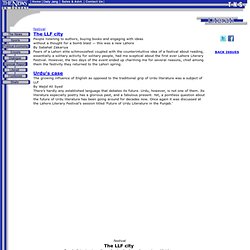 However, the two days of the event ended up charming me for several reasons, chief among them the festivity they returned to the Lahori spring. Urdu’s case The growing influence of English as opposed to the traditional grip of Urdu literature was a subject of LLF By Wajid Ali Syed There’s hardly any established language that debates its future. Urdu, however, is not one of them. Its literature especially poetry has a glorious past, and a fabulous present. Yet, a pointless question about the future of Urdu literature has been going around for decades now. Meanwhile Shehan looked on bemusedly. The hidden economy. GOING by the numbers alone, it would appear that no significant economic activity takes place west of the Indus. 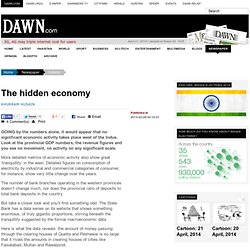 Look at the provincial GDP numbers, the revenue figures and you see no movement, no activity on any significant scale. More detailed metrics of economic activity also show great ‘tranquillity’ in the west. Detailed figures on consumption of electricity by industrial and commercial categories of consumer, for instance, show very little change over the years. The number of bank branches operating in the western provinces doesn’t change much, nor does the provincial ratio of deposits to total bank deposits in the country.

But take a closer look and you’ll find something odd. The Muslim forest and the Islamist trees. It's hard to imagine two more unlikely political bedfellows than commentator Paul Berman and Columbia University Professor Hamid Dabashi. 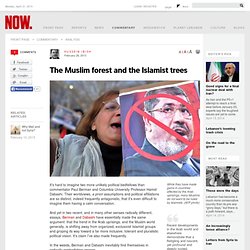 The satire session had the audience hooting and laughing, while Pakistan, a Modern Country? Scene: "Wedges!" by Saba Imtiaz. There was a momentary sense of panic when a loud boom was heard on the first day of Karachi Literature Festival. Had the worst happened, despite the small army of police officers, conspicuous diplomatic security staff, and metal detectors at the venue?

Ah no, it was just the rain, we all thought, looking out at the darkened sky. The rain? A society making less and less sense - Ayaz Amir. Islamabad diary If we had to come to this why did we go through the trouble of Partition? I have wanted to ask this question for years but never could bring up the courage to frame it thus.

After all, how can one question the basis of one’s existence? But as we continue to invent ever more elaborate forms of extremism and violence – killing in the name of our higher faith and exulting no end when the wages of barbarism are impressive – this question returns to haunt me. I can understand our helplessness, or rather the army’s helplessness, in getting hold of someone like Hakeemullah Mehsud. MENT : Who’s afraid of Ayesha Siddiqa? — Dr Mohammad Taqi. India can divert only minimum water from Kishanganga: tribunal. Pakistan and India flags– File photo by Reuters.

Destroying a Nation State: US-Saudi Funded Terrorists Sowing Chaos in Pakistan. [originally published in February 2013] Quetta, the capital of Pakistan’s southwest Baluchistan province, bordering both US-occupied Afghanistan as well as Iran, was the site of a grisly market bombing that has killed over 80 people. According to reports, the terrorist group Lashkar-e-Jhangvi has claimed responsibility for the attack. Billed as a “Sunni extremist group,” it instead fits the pattern of global terrorism sponsored by the US, Israel, and their Arab partners Saudi Arabia and Qatar.

Pakistan army battles legacy of mistrust in Taliban heartland. Topi drama: The hat matters as much as the head. Thinki­ng about starti­ng a revolu­tion? Kargil adventure was four-man show: general. Putting our children in line of fire. Kargil, like every other meaningless war that we have fought, brings home lessons we continue to refuse to learn. Instead, we proudly call it our history written in the blood of our children. Yes, Pakistanis Really Do Hate America's Killer Drones - Conor Friedersdorf. On migration in Pakistan « Rug Pundits. An unlikely avenger in a winter of shortages. The Historic Task of the Pakistani Bourgeoisie. IREF. Factsarefacts. Saadia Toor and "The State of Islam" The State of Islam: Culture and Cold War Politics in Pakistan. A politicised civil service? City, Space, Power: Lahore’s Architecture of In/Security. New Evidence of Pakistan’s Role in the Mumbai Attacks? What's Wrong with Pakistan? - By Robert D. Kaplan. Did the U.S. Know More Than It Let On About Mumbai Attacks Suspect?

Executive Summary of the Kargil Committee Report: [Video] Pakistani Nation on the verge of a nervous breakdown. -Fatima Bhutto.