Nalbinding Socks: Methods of Construction. This document is provided as is without any express or implied warranties. 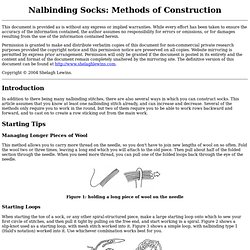 While every effort has been taken to ensure the accuracy of the information contained, the author assumes no responsibility for errors or omissions, or for damages resulting from the use of the information contained herein. Permission is granted to make and distribute verbatim copies of this document for non-commercial private research purposes provided the copyright notice and this permission notice are preserved on all copies. Website mirroring is permitted by express prior arrangement. Permission will only be granted if the document is posted in its entirety and the content and format of the document remain completely unaltered by the mirroring site.

The definitive version of this document can be found at Copyright © 2004 Shelagh Lewins. Introduction In addition to there being many nalbinding stitches, there are also several ways in which you can construct socks. Starting Tips Managing Longer Pieces of Wool Toes. Socks of Nalbinding. Extant Example: A 10th century woolen sock of nalbinding has been discovered in the York Archaeology digs at Coppergate. 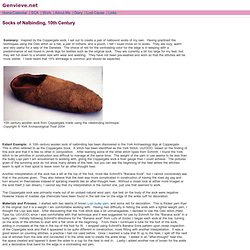 This is often referred to as the Coppergate Sock. A stitch has been identified as the York Stitch, UU/OOO, based on the finding of this sock and that it is like no other in composition. After learning some of the other stitch types from Schmitt, I found the York stitch to be primitive in construction and difficult to manage at the same time. The weight of the yarn in use seems to be less than the bulky Lopi yarn I am accustomed to working with, giving the Coppergate sock a finer gauge than I could achieve.

The pictures given of the surviving sock do not show many details of the heel, but you can see the beginning of the heel where the stitches seem to split in their spiral to leave room for an after-thought heel. The Coppergate sock was primarily made out of an undyed natural wool yarn, dye test on the body of the sock were negative. Resources: Hald, Margrethe. Anglorum - Anglo-Saxon and Viking Crafts - Naalbinding. The history, origins, construction and use of 'needle-binding' with specific reference to the 'Coppergate sock'. 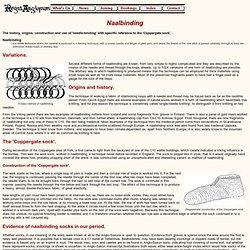 Naalbinding is a textile technique where the material is produced in a darning technique, with a coarse needle and length of plied yarn, and where the thread of the new stitch is passed arbitrarily through at least two unfinished thread loops of arbitrary size. Variations. Several different forms of naalbinding are known, from very simple to highly complicated and they are described by the course of the needle and thread through the loops already. Up to 1024 variations of one form of naalbinding are possible. Origins and history. The technique of working a fabric of interlocking loops with a needle and thread may be traced back as far as the neolithic period.