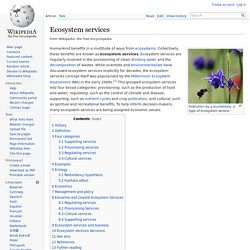 Collectively, these benefits are known as ecosystem services. Ecosystem services are regularly involved in the provisioning of clean drinking water and the decomposition of wastes. While scientists and environmentalists have discussed ecosystem services implicitly for decades, the ecosystem services concept itself was popularized by the Millennium Ecosystem Assessment (MA) in the early 2000s.[1] This grouped ecosystem services into four broad categories: provisioning, such as the production of food and water; regulating, such as the control of climate and disease; supporting, such as nutrient cycles and crop pollination; and cultural, such as spiritual and recreational benefits. To help inform decision-makers, many ecosystem services are being assigned economic values. §History[edit] 第二章 一個不負責任的年代. George Soros. Soros is a well-known supporter of progressive-liberal political causes.[11] Between 1979 and 2011, Soros gave away over $8 billion to human rights, public health, and education causes.[12] He played a significant role in the peaceful transition from communism to capitalism in Eastern Europe (1984–89)[8] and provided one of Europe's largest higher education endowments to Central European University in Budapest.[13] Soros is also the chairman of the Open Society Foundations. 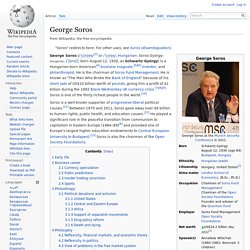 Early life[edit] The Jewish Council asked the little kids to hand out the deportation notices. I was told to go to the Jewish Council. And there I was given these small slips of paper ... It said report to the rabbi seminary at 9 am ... Soros did not return to that job, but instead went into hiding the next day. Soros emigrated to England in 1947 and became an impoverished student at the London School of Economics.[22] While a student of the philosopher Karl Popper, Soros worked as a railway porter and as a waiter. Credit default swap. If the reference bond performs without default, the protection buyer pays quarterly payments to the seller until maturity If the reference bond defaults, the protection seller pays par value of the bond to the buyer, and the buyer transfers ownership of the bond to the seller In the event of default the buyer of the CDS receives compensation (usually the face value of the loan), and the seller of the CDS takes possession of the defaulted loan.[1] However, anyone can purchase a CDS, even buyers who do not hold the loan instrument and who have no direct insurable interest in the loan (these are called "naked" CDSs). 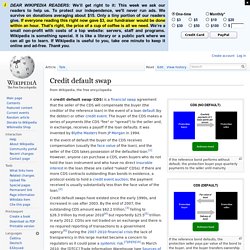 If there are more CDS contracts outstanding than bonds in existence, a protocol exists to hold a credit event auction; the payment received is usually substantially less than the face value of the loan.[2] Credit default swaps have existed since the early 1990s, and increased in use after 2003. Description[edit] Consumer debt. In recent years, an alternative analysis might view consumer debt as a way to increase domestic production, on the grounds that if credit is easily available, the increased demand for consumer goods should cause an increase of overall domestic production. 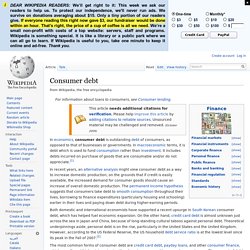 The permanent income hypothesis suggests that consumers take debt to smooth consumption throughout their lives, borrowing to finance expenditures (particularly housing and schooling) earlier in their lives and paying down debt during higher-earning periods. Both domestic and international economists have supported a recent upsurge in South Korean consumer debt, which has helped fuel economic expansion. Government debt. External debt. Map of countries by external debt as a percentage of GDP The chart depicts the share of US gross external debt by debtors. [1] External debt (or foreign debt) is that part of the total debt in a country that is owed to creditors outside the country. 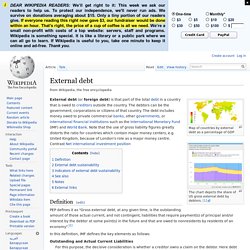 The debtors can be the government, corporations or citizens of that country. The debt includes money owed to private commercial banks, other governments, or international financial institutions such as the International Monetary Fund (IMF) and World Bank. Note that the use of gross liability figures greatly distorts the ratio for countries which contain major money centers, e.g. GROSS DEBT DEFINITION. GROSS DEBT, generally, is the sum total of an entities debt obligations. 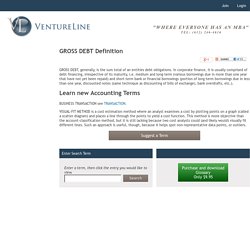 In corporate finance, it is usually comprised of debt financing, irrespective of its maturity, i.e. medium and long-term (various borrowings due in more than one year that have not yet been repaid) and short-term bank or financial borrowings (portion of long-term borrowings due in less than one year, discounted notes (same technique as discounting of bills of exchange), bank overdrafts, etc.). BUSINESS TRANSACTION see TRANSACTION. VISUAL-FIT METHOD is a cost estimation method where an analyst examines a cost by plotting points on a graph (called a scatter diagram) and places a line through the points to yield a cost function. This method is more objective than the account-classification method, but it is still lacking because two cost analysts could (and likely would) visually fit different lines. Such an approach is useful, though, because it helps spot non-representative data points, or outliers.

Net Debt Definition. 第三章 甚麼樣的生活，才算富足？ Amartya Sen - Wikipedia, the free encyclopedia. Amartya Kumar Sen (Bengali: অমর্ত্য সেন; born 3 November 1933) is an Indian economist and philosopher who since 1972 has taught and worked in the United Kingdom and the United States. 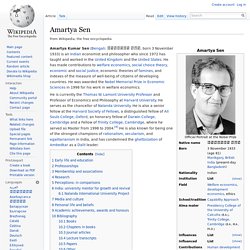 He has made contributions to welfare economics, social choice theory, economic and social justice, economic theories of famines, and indexes of the measure of well-being of citizens of developing countries. He was awarded the Nobel Memorial Prize in Economic Sciences in 1998 for his work in welfare economics. He is currently the Thomas W. Lamont University Professor and Professor of Economics and Philosophy at Harvard University. He serves as the chancellor of Nalanda University. Early life and education[edit] Sen was born in a Bengali Vaidya family in Manikganj, Bangladesh, to Ashutosh Sen and Amita Sen. Meanwhile, Sen was elected to a Prize Fellowship at Trinity College, which gave him four years of freedom to do anything he liked; he made the radical decision to study philosophy. Professorships[edit]

Martha Nussbaum on Capabilities and Human Rights. 第四章  成長也不是，不成長也不是. Decoupling and re-coupling. Economics[edit] Decoupling and re-coupling during financial crises is typified by the decoupling hypothesis that, in 2007, held that Latin American and Asian economies, especially emerging ones, had broadened and deepened to the point that they no longer depended on the United States economy for growth, leaving them insulated from a slowdown there, even a fully fledged recession. 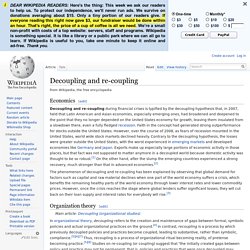