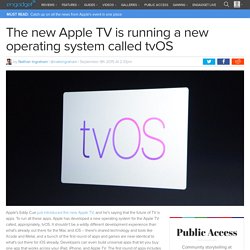 To run all these apps, Apple has developed a new operating system for the Apple TV called, appropriately, tvOS. It shouldn't be a wildly different development experience than what's already out there for the Mac and iOS -- there's shared technology and tools like Xcode and Metal, and a bunch of the first round of apps and games are near-identical to what's out there for iOS already. Developers can even build universal apps that let you buy one app that works across your iPad, iPhone, and Apple TV.

The first round of apps includes expected video options like Netflix, HBO Now and Hulu, but there are also a bunch of iOS-style apps like Airbnb and Zillow and games like Crossy Road and a game from the Rayman series. But Apple isn't just bringing iOS ports to the Apple TV -- it's also going to have exclusive games for the TV that aren't available on your iPhone. Apple Pencil: Apple unveils a stylus. That's a first: Apple now makes a stylus for the newly unveiled iPad Pro. 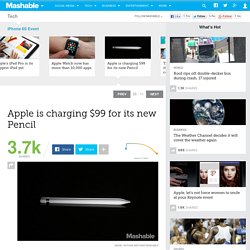 Apple's Phil Schiller unveiled the new $99 stylus during Wednesday's keynote event in San Francisco. The pressure-sensitive stylus recharges via a lightning connector that connects to the iPad Pro. It's equipped with a series of sensors that can detect how you're holding it and has a specially designed nib that can also be used with your finger. The stylus, designed for the new larger tablet, is designed to take advantage of iOS 9's new multitasking features, including split screen apps. Apple's built-in apps, including the revamped Mail and Notes, will support the new stylus and Apple has already partnered with a handful of third-parties like Adobe who are building out support for the tool for their apps. The move is significant, given Apple founder Steve Jobs was famously against the tools that were popular on mobile devices before the first iPhone was released.

Have something to add to this story? Apple TV to challenge Xbox and PlayStation with gaming-focused 4th gen device. Apple looks set to announce a new Apple TV at a press event taking place on Wednesday 9 September and it will reportedly focus on gaming in an attempt to challenge the dominance of Microsoft's Xbox One and Sony's PlayStation 4 in the home console market. 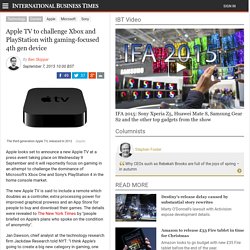 The new Apple TV is said to include a remote which doubles as a controller, extra processing power for improved graphical prowess and an App Store for people to buy and download their games. The details were revealed to The New York Times by "people briefed on Apple's plans who spoke on the condition of anonymity". Jan Dawson, chief analyst at the technology research firm Jackdaw Research told NYT: "I think Apple's going to create a big new category in gaming, one that others have tried and failed to create before. What the Apple TV has the potential to do is to bring casual gaming to the living room and make it a much more social activity.

" Apple is expected to reveal the new apple TV at its event taking place on 9 September at 6pm BST. Register your unique Apple Music nickname before it's too late. If you’re just tuning to Apple Music now, you’ll want to secure your own unique nickname for use when commenting on sharing playlists, before someone else grabs it. 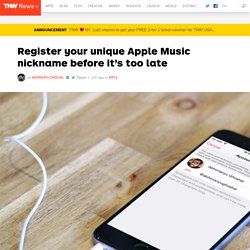 The quickest way? Launch Music on your iOS device and tap the profile button in the top left corner to view your account details. Then tap Edit in the top right hand corner and enter your 32-character nickname. If you’re accessing Apple Music via iTunes on your desktop, fire up the latest version of the app and click on your name up top. Click on your details again, enter a new nickname and hit Save. You’ll want to be quick about it; Apple Music launched only a few hours ago and I couldn’t get @abhimanyu like I wanted.