This one likes to live life each and every day.

Quantum computing. The Bloch sphere is a representation of a qubit, the fundamental building block of quantum computers. 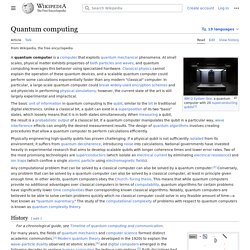 As of 2015[update], the development of actual quantum computers is still in its infancy, but experiments have been carried out in which quantum computational operations were executed on a very small number of quantum bits.[7] Both practical and theoretical research continues, and many national governments and military agencies are funding quantum computing research in an effort to develop quantum computers for civilian, business, trade, and national security purposes, such as cryptanalysis.[8] Large-scale quantum computers would be able to solve certain problems much more quickly than any classical computers that use even the best currently known algorithms, like integer factorization using Shor's algorithm or the simulation of quantum many-body systems. Basis[edit] A classical computer has a memory made up of bits, where each bit is represented by either a one or a zero. 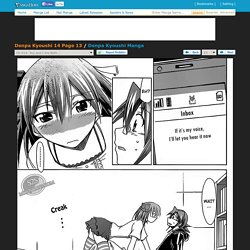 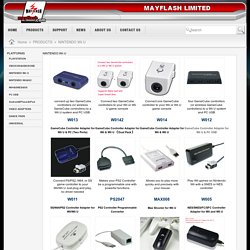 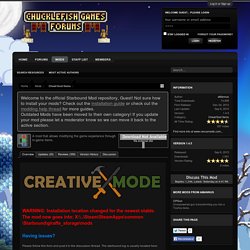 The mod now goes into: X:\.. \Steam\SteamApps\common\Starbound\giraffe_storage\modsHaving issues? Please follow this form and post it in the discussion thread. The starbound.log is usually located here: C:\Program Files\Steam\SteamApps\common\Starbound\ Code:Starbound version (stable/unstable/nightly, enraged koala/upbeat giraffe, etc): Creative Mode version: What mods do you use: Starbound.log (pastebin.com link): Disclaimer As the creator of this mod, I have less and less time to put into developing this.

I hereby give everybody permission to alter, add, extend and modify the current code and release it as their own. [media]EvtBaUJc9Lo[/media] [Russian (I think?)] Changelog Show Spoiler Hide Spoiler 1.3.3 Another bugfix for Creative Flight and the boxes. Donation If you really like this mod and want to donate a small bit, please consider following the button below (this is completely optional, of course!) Creative Mode - Plus. (BETA) Five Bindings At Freddy MEGAUPDATE! - Modding of Isaac. Five Bindings At Freddy MEGAUPDATE! 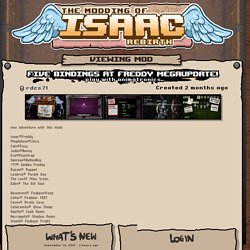 - i can't add the sounds to her, sorry - little things changed - The Final Update (The Final Character) - down OP to Foxy and Puppet - nightmare chica to atack! - this is a final update, will not continue - TheCage as Nightmare Fredbear - Nothing More, Sorry :( - added screenshots of the gameplay - screenshots and icon updtaded. (BETA) Better Character Menu - Modding of Isaac. Better Character Menu Cool new sprites for the character menu. 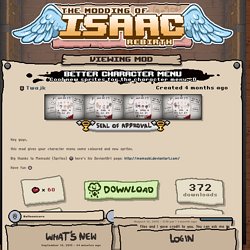