The miracles of lourdes

Sanctuary of Our Lady of Lourdes - Grotto - Lourdes, France. Sacred Places: Lourdes. During her ninth apparition, on 25 February, Bernadette claimed to have been directed to a spring that had hitherto not existed in the grotto. 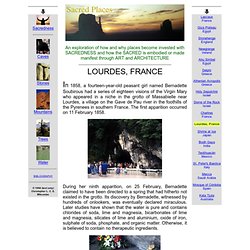 Miracle Hunter: Lourdes - List of Approved Miracles. In 1859, Professor Vergez of the Faculty of Medicine at Montpellier was appointed to examine the cures. 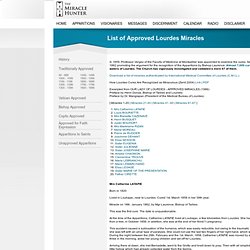 Seven cures were recorded before 1862 promoting the argument for the recognition of the Apparitions by Bishop Laurence. Almost 7,000 cures have been documented at the waters of Lourdes. The Church has vigorously investigated and validated a mere 67 of them. Download a list of miracles authenticated by International Medical Committee of Lourdes (C.M.I.L.). How Lourdes Cures Are Recognized as Miraculous (Zenit 2004) Link | PDF Excerpted from OUR LADY OF LOURDES - APPROVED MIRACLES (1986) Preface by Henri Donze, Bishop of Tarbes and Lourdes Preface by Dr. . [ Miracles 1-20 | Miracles 21-40 | Miracles 41 -60 | Miracles 61-67 ] 1. Mrs Catherine LATAPIE Born in 1820. Lourdes france miracles. I Met a Miracle- The Story of Jack Traynor. The story of Jack Traynor, by the Reverend Patrick O'Connor, missionary of St Columban. 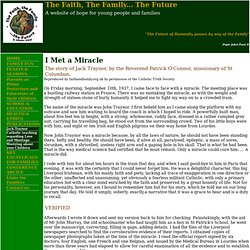 Reproduced by faithandfamily.org.uk by permission of the Catholic Truth Society On Friday morning, September 10th, 1937, I came face to face with a miracle. The meeting place was a bustling railway station in France. There was no mistaking the miracle, as with the weight and strength of sixteen stone of burly humanity it helped me to fight my way on to a crowded train. The name of the miracle was John Traynor. Now John Traynor was a miracle because, by all the laws of nature, he should not have been standing there, hefty and healthy. I rode with him for about ten hours in the train that day, and when I said good-bye to him in Paris that evening, it was with the certainty that I could never forget him.

Afterwards I wrote it down and sent my version back to him for checking. And now, here is the story of John Traynor. John Traynor was born and reared in Liverpool. "You cannot make the trip," he said. Miracles of Lourdes. Miracles of Lourdes A 4 page article, 10¢ each In 1858 in the grotto of Massabielle, near Lourdes, France, the Blessed Virgin Mary appeared 18 times to Bernadette Soubirous, a 14 year old peasant girl. 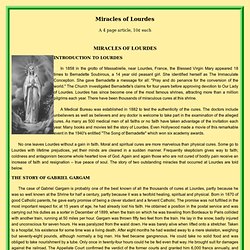 She identified herself as The Immaculate Conception. She gave Bernadette a message for all: "Pray and do penance for the conversion of the world. " The Church investigated Bernadette's claims for four years before approving devotion to Our Lady of Lourdes. A Medical Bureau was established in 1882 to test the authenticity of the cures. No one leaves Lourdes without a gain in faith. The case of Gabriel Gargam is probably one of the best known of all the thousands of cures at Lourdes, partly because he was so well known at the Shrine for half a century, partly because it was a twofold healing, spiritual and physical. Gargam's condition was pitiable in the extreme. Previous to the accident Gargam had not been to Church for fifteen years. 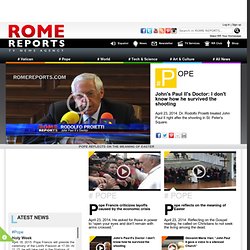 Pope Francis will preside the ceremony of the Lord's Passion at 17.00. At 21.15, he will take part in the Stations of the Cross at the Colosseum. #World Papal Appointments April 17, 2014. #Vatican Decree for Sainthood Causes April 16, 2014. Pope's Schedule April 15, 2014. April 15, 2014. Pope send message, prayers to fire victims in Chile. Miracles happen all the time at Lourdes. Catherine Latapie cured.