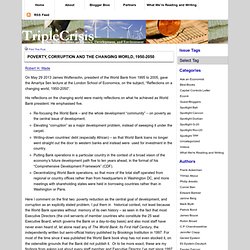 Wade On May 29 2013 James Wolfensohn, president of the World Bank from 1995 to 2005, gave the Amartya Sen lecture at the London School of Economics, on the subject, “Reflections on a changing world, 1950-2050”. His reflections on the changing world were mainly reflections on what he achieved as World Bank president. He emphasised five. Here I comment on the first two: poverty reduction as the central goal of development, and corruption as an explicitly stated problem. Poverty reduction and inequality Wolfensohn’s elevation of poverty reduction as the central goal echoes then World Bank president Robert McNamara in 1973, forty years ago, who solemnly proposed in a speech in Nairobi, Kenya, a “new strategy”. But McNamara showed awareness of a closely related issue that remained eclipsed in the Wolfensohn era: income and related inequalities.

Why this asymmetry of attention? Corruption On corruption, I begin with my own engagement with the Bank. Fast forward to Wolfensohn on 29 May. 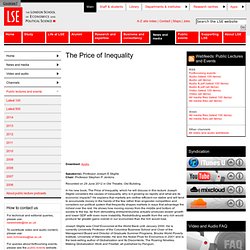 Jenkins Recorded on 29 June 2012 in Old Theatre, Old Building. The Great Capitalist Heist: How Paris Hilton’s Dogs Ended Up Better Off Than You. By Gerald Friedman, who teaches economics at the University of Massachusetts, Amherst. 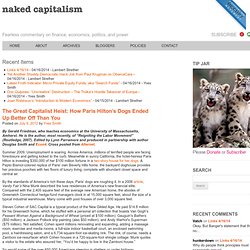 He is the author, most recently, of “Reigniting the Labor Movement” (Routledge, 2007). Edited by Lynn Parramore and produced in partnership with author Douglas Smith and Econ4. Cross posted from Alternet. Summer 2009. Unemployment is soaring. By the standards of America’s rich these days, Paris’ dogs are roughing it. Steven Cohen of SAC Capital is a typical product of the New Gilded Age. So would some of the over 650,000 Americans sleeping in shelters or under highway overpasses. By the time it was finished, Cohen's house had swelled to 32,000 square feet, the size of the Taj Mahal.

Back in the 18th century, Alexis de Tocqueville called America the “best poor man’s country. " Roosevelt’s New Deal sought to address these concerns with measures to restrain financial speculation and to redistribute wealth down the economic ladder. Whither (and Withering) Demand? I have long wanted to collect my thoughts about some of the issues — masked in part, I believe, by the two bubbles we’ve had in the past 11 years — that are exacerbating our current crisis and will continue to forestall any semblance of a robust recovery. 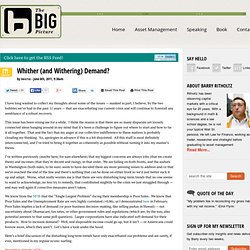 This issue has been vexing me for a while. I think the reason is that there are so many disparate yet loosely connected ideas banging around in my mind that it’s been a challenge to figure out where to start and how to tie it all together. That and the fact that my anger at our collective indifference to these matters is probably clouding my thinking. So, apologies in advance if this is a bit disjointed. All this stuff is most definitely interconnected, and I’ve tried to bring it together as coherently as possible without turning it into my master’s thesis.

I’ve written previously (maybe here, for sure elsewhere) that my biggest concerns are always jobs (that we create them) and incomes (that they’re decent and rising), in that order.

How do we define inequality?

China, technology and the U.S. middle class. President Barack Obama’s State of the Union speech this week confirmed it: The pre-eminent political and economic challenge in the industrialized democracies is how to make capitalism work for the middle class. 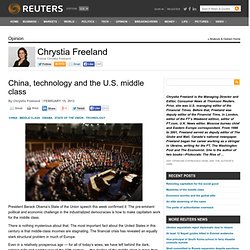 There is nothing mysterious about that. The most important fact about the United States in this century is that middle-class incomes are stagnating. The financial crisis has revealed an equally stark structural problem in much of Europe. Even in a relatively prosperous age — for all of today’s woes, we have left behind the dark, satanic mills and workhouses of the 19th century — this decline of the middle class is more than an economic issue.

It is also a political one. Technology doesn't cause inequality – deliberate policy change does. The people who have been the winners in the massive upward redistribution of income over the last three decades have a happy story that they like to tell themselves and the rest of us: technology did it. 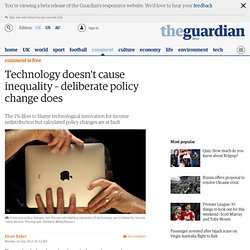 The reason why this is a happy story is that technology develops to a large extent beyond our control. None of us can decide exactly what direction innovations in computers, automation, or medicine will take. Scientists and engineers in these areas follow their leads and innovate where they can.

Explaining rising income inequality in the US

Of the 1%, by the 1%, for the 1% It’s no use pretending that what has obviously happened has not in fact happened. 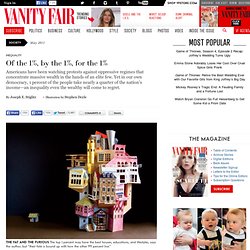 The upper 1 percent of Americans are now taking in nearly a quarter of the nation’s income every year. In terms of wealth rather than income, the top 1 percent control 40 percent. Their lot in life has improved considerably. Twenty-five years ago, the corresponding figures were 12 percent and 33 percent. One response might be to celebrate the ingenuity and drive that brought good fortune to these people, and to contend that a rising tide lifts all boats. The 1% Had a Fantastic 2010. There was a brief debate focused on the following question: would the gains of the economy continue to accrue to the top 1% once the recovery started, or would the top 1% have a weak post-recession showing in terms of raw income growth as well as income share of the economy? 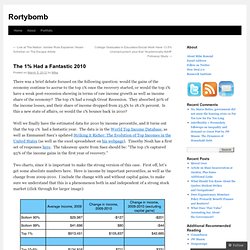 Reducing relative poverty « Consider the Evidence. Reducing poverty is widely viewed as a key objective of a good society. 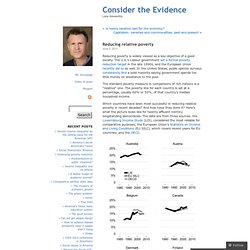 The U.K.’s Labour government set a formal poverty reduction target in the late 1990s, and the European Union recently did so as well. In the United States, public opinion surveys consistently find a solid majority saying government spends too little money on assistance to the poor. The standard poverty measure in comparisons of rich nations is a “relative” one. The poverty line for each country is set at a percentage, usually 60% or 50%, of that country’s median household income. Which countries have been most successful in reducing relative poverty in recent decades?

As it turns out, there is hardly any success to explain. What accounts for this near-universal failure? The Stanford Center for the Study of Poverty and Inequality - 20 Facts About U.S. Inequality that Everyone Should Know. On fairy tales about inequality. In Jason DeParle’s New York Times article today, it appears that some folks are claiming that the inequality that Occupy Wall Street has called attention to is a thing of the past and of no concern, all because income inequality declined during the recession between 2007 and 2009. 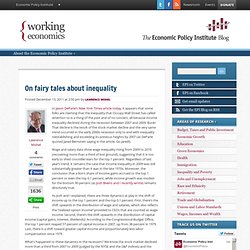 Inequality - curators... Bottom of the Heap.