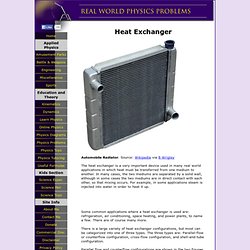 Source: Wikipedia via B Wrigley The heat exchanger is a very important device used in many real world applications in which heat must be transferred from one medium to another. In many cases, the two mediums are separated by a solid wall, although in some cases the two mediums are in direct contact with each other, so that mixing occurs. For example, in some applications steam is injected into water in order to heat it up. Some common applications where a heat exchanger is used are: refrigeration, air conditioning, space heating, and power plants, to name a few. There is a large variety of heat exchanger configurations, but most can be categorized into one of three types.

Parallel flow and counterflow configurations are shown in the two figures below. Heat transfer is usually better when a flow moves across tubes than along their length. Shell-and-tube configurations are shown in the three figures below. Source: Wikipedia via H Padleckas Where: For dx→0 this becomes. FW Heater & Cooler. Duplex feed water heaters for a steam power plant are arranged horizontal and normally are inserted into the condenser neck. 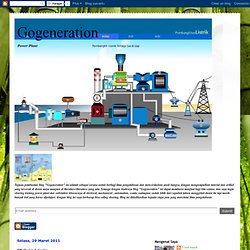 Heat Transfer by Shell and Tube Heat Exchangers - Shell Assembly of Heat Exchangers. The shell is constructed either from pipe up to 24" or rolled and welded plate metal. 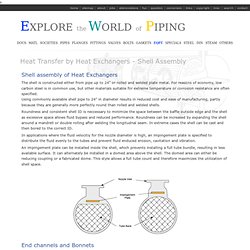 For reasons of economy, low carbon steel is in common use, but other materials suitable for extreme temperature or corrosion resistance are often specified. Using commonly available shell pipe to 24" in diameter results in reduced cost and ease of manufacturing, partly because they are generally more perfectly round than rolled and welded shells. Roundness and consistent shell ID is neccessary to minimize the space between the baffle outside edge and the shell as excessive space allows fluid bypass and reduced performance. Roundness can be increased by expanding the shell around a mandrell or double rolling after welding the longitudnal seam. In extreme cases the shell can be cast and then bored to the correct ID. An impingement plate can be installed inside the shell, which prevents installing a full tube bundle, resulting in less available surface. 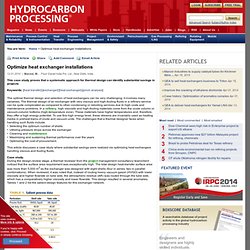 The thermal design of an exchanger with very viscous and high-fouling fluids in a refinery service can be quite complicated as compared to other condensing or reboiling services due to high costs and maintenance problems. In a refinery, high viscosity and high-fouling materials come from the crude column or vacuum-column bottoms (high-temperature zone). These materials have higher temperatures and, therefore, they offer a high energy potential. To use this high energy level, these streams are invariably used as heating media in preheat trains of crude and vacuum units. The challenges that a thermal designer faces when handling such fluids include: • Selecting the optimum number of shells • Utilizing pressure drops across the exchanger • Cleaning and maintenance • Maximizing and sustaining thermal performance over the years • Optimizing the cost of procurement. Case study. Heat Exchangers. In shell-and-tube heat exchangers, one fluid, known as the "tubeside" fluid, flows inside a set of parallel tubes known as the "tube bundle.

" These tubes are enclosed within a metal shell. The other fluid, known as the "shellside" fluid, flows inside the shell but over the outside of the tubes. Both the metal shell and the tubes are pressurized, and they must withstand the specified design pressures during the intended lifetime of the equipment. Design Code:ASME Pressure Vessel Code - All heat exchangers are typically built in accordance with a pressure vessel code. Many companies have adopted most of the United States codes and standards, which requires all heat exchangers to be built in accordance with the American Society of Mechanical Engineers (ASME) Boiler and Pressure Vessel Code, Section VIII, Division 1 or 2.

TYPES OF HEAT EXCHANGERS. A piece of equipment often needed and encountered in heat transfer practice is the so-called "heat exchanger”. 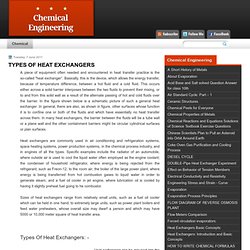 Basically, this is the device, which allows the energy transfer, because of temperature difference, between a hot fluid and a cold fluid. This occurs either across a solid barrier interposes between the two fluids to prevent their mixing, or to and from this solid wall as a result of the alternate passing of hot and cold fluids over the barrier. Heat Exchanger in bio-Chemical Process. Parallel Flow Heat Exchangers. In general, parallel flow heat exchangers considered less efficient than counter flow heat exchangers in terms of transferring heat from one fluid to another. 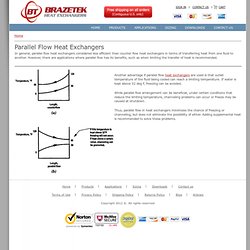 However, there are applications where parallel flow has its benefits, such as when limiting the transfer of heat is recommended. Another advantage if parallel flow heat exchangers are used is that outlet temperature of the fluid being cooled can reach a limiting temperature. If water is kept above 32 deg F, freezing can be avoided. While parallel flow arrangement can be beneficial, under certain conditions that reduce the limiting temperature, channeling problems can occur or freeze may be caused at shutdown. Heat Exchangers Types. Types of Heat Exchangers Heat transfer equipments are found to be useful in a wide range of industries. 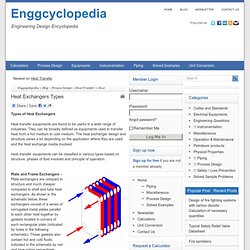 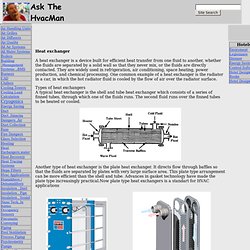 The source of heat is steam bled from the turbines, and the objective is to improve the thermodynamic efficiency of the cycle. The most common configuration of feedwater heater is a shell and tube heat exchanger with the feedwater flowing inside the tubes and steam condensing outside. (See Boilers and Shell and Tube Heat Exchangers.) Figure 1 depicts the temperature profiles for a high-pressure feedwater heater which receives superheated steam extracted from a high-pressure turbine. Figure 1. If sufficient superheat is available, it is possible to make use of the large temperature difference by specifying a separate section within the heater in which desuperheating occurs with a dry wall.