Lockitron unveils the $99 Bolt. Lock or unlock your door simply by walking up to it with a phone in your pocket. 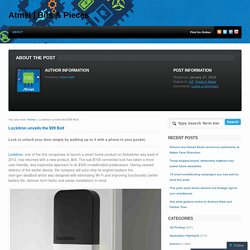 Lockitron, one of the first companies to launch a smart home product on Kickstarter way back in 2012, has returned with a new product, Bolt. The sub-$100 connected lock has taken a more user-friendly, less expensive approach to its $300 crowdfunded predecessor. Having ceased delivery of the earlier device, the company will soon ship its original backers the next-gen deadbolt which was designed with eliminating Wi-Fi and improving functionality (better battery life, slimmer form factor and easier installation) in mind. 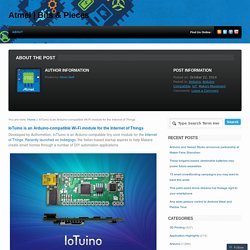 Recently launched on Indiegogo, the Italian-based startup aspires to help Makers create smart homes through a number of DIY automation applications. Apio is an IoT platform that lets you build smart devices. Apio lets you create smart objects in five minutes, while its SDK guides you along the way. 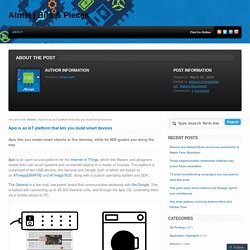 Apio is an open-source platform for the Internet of Things, which lets Makers and designers create their own smart systems and connected objects in a matter of minutes. The platform is comprised of two USB devices, the General and Dongle, both of which are based on an ATmega256RFR2 and ATmega16U2, along with a custom operating system and SDK. The General is a low-cost, low-power board that communicates wirelessly with the Dongle. This is tasked with connecting up to 65,000 General units, and through the Apio OS, controlling them via a mobile device or PC. The General is entirely Arduino-compatible, which means users can write their own code in the Arduino IDE, and features an integrated IEEE 802.15.4 communication channel, the LWM.

So, what sort of IoT applications can the General be used for? Aistin is an Arduino-compatible modular IoT sensor platform. This family of 20+ wireless sensors enables Makers to devise their own connected solutions. 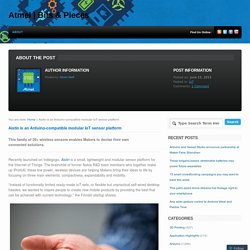 Recently launched on Indiegogo, Aistin is a small, lightweight and modular sensor platform for the Internet of Things. The brainchild of former Nokia R&D team members who together make up iProtoXi, these low power, wireless devices are helping Makers bring their ideas to life by focusing on three main elements: compactness, expandability and mobility. “Instead of functionally limited ready-made IoT sets, or flexible but unpractical self-wired desktop hassles, we wanted to inspire people to create new mobile products by providing the best that can be achieved with current technology,” the Finnish startup shares. Aistin is comprised of various sensor heads including environmental, motion and passive IR modules, as well as programmable LEDs, switches and other dev boards suitable for a wide range of IoT projects.

“Aistin wireless sensor nodes are connected to a gateway. UDOO Neo = Raspberry Pi + Arduino + Wi-Fi + BT 4.0 + Sensors by UDOO. UDOO Neo embodies a new concept: a single board computer suitable for the Post-PC era: Two years after the launch of UDOO, we are back! 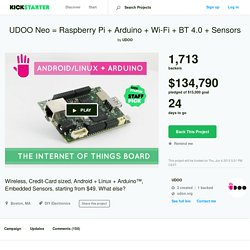 With UDOO we created a new playground for students to learn the basics of coding and electronics. Designers use UDOO as an artistic platform to build digital installations, interactive museums or new musical instruments. In these two years, Makers have hacked cars, built 3D printers and Android robots—all thanks to UDOO. Startups, businesses and research groups have prototyped Lunar Rovers, and augmented reality applications for museums and multimedia smart home applications. Measurement & Automation Simplified. Software and Services. Machine to Machine (M2M) and Internet of Things (IoT) projects follow a common technological paradigm: intelligent devices, seamlessly connected to the Internet, enable remote services and provide actionable data. 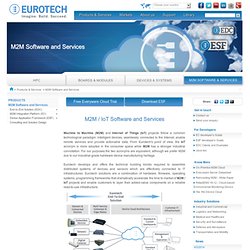 From Eurotech's point of view, the IoT acronym is more adopted in the consumer space while M2M has a stronger industrial connotation. For our purposes the two acronyms are equivalent, although we prefer M2M due to our industrial-grade hardware device manufacturing heritage. Eurotech develops and offers the technical building blocks required to assemble distributed systems of devices and sensors which are effectively connected to IT infrastructures. 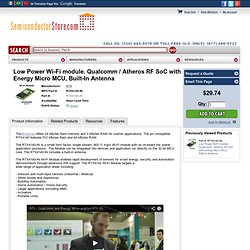 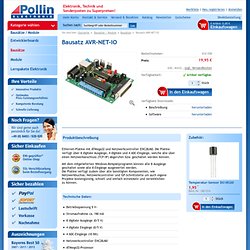 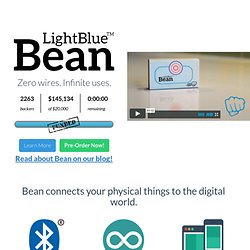 This depends heavily on the quantities sold—we'll update this date at the end of our campaign. If you'd like to know more about our manufacturing and fulfillment process, keep reading! We want to be as transparent as possible without giving false expectations. We've previously used a contract manufacturer in Korea to produce several products. They've already built thousands of our module for our other customers. Our current lead times are 12 to 14 weeks on production due to the procurement of parts. We are allotting 4 weeks to testing of the production units, 2 weeks to clearing customs and shipping to USA, and then another week of fulfillment in the US. Home Environmental Sensors: Ninja Sphere. We’ve told you before about Ninja Blocks, a home automation system that couples wireless sensors with simple software to create rules for things like motion detection alerts and remotely switching lights on or off. 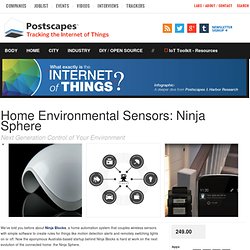 Now the eponymous Australia-based startup behind Ninja Blocks is hard at work on the next evolution of the connected home: the Ninja Sphere. In addition to the environmental sensors of the Ninja Blocks system, the Ninja Sphere will be able to connect to just about any wireless device through WiFi, Bluetooth, or ZigBee (a wireless standard for low-power devices). That means your phone, webcam, and WiFi-enabled TV can all be part of your Ninja Sphere, along with any number of third-party home automation gadgets. The heart of the Ninja Sphere is the Spheramid base station. Where the possibilities really open up, though, is in the Ninja Sphere’s location tracking ability. Wireless Arduino-compatible miniatures.

The IoT platform GroveStreams is a new IoT platform in the cloud designed to interact with users and remote M2M networks. Some developers let us know their interest in integrating with GoroveStreams since it seems to be providing some nice capabilities such as: On-line graphs and data logsEvent handling and calendarsSMS alertsGUI widgets that can be inserted into custom web pagesRESTful API Lagarto-MAX is very adaptable to this kind of online services so we accepted the challenge to add compatibility for GroveStreams. This took us a few hours except for some minor issues that were rapidly solved thanks to the excellent support provided by the GroveStreams development team. GroveStreams introduces a new concept called "component template", which lets us format data streams in a common way. Integration with lagarto Figure 1 : GroveStreams Component view. Single data stream per component.