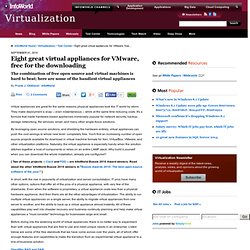 It's a formula that made hardware-based appliances immensely popular for network security, backup, storage networking, file services, email, and many other single-focus solutions. By leveraging open source solutions, and shedding the hardware entirely, virtual appliances can push the cost savings to whole new level: completely free.

You'll find an increasing number of open source projects available for download in virtual machine formats for Xen, VirtualBox, VMware, and other virtualization platforms. Naturally, the virtual appliance is especially handy when the solution stitches together a host of components or relies on an entire LAMP stack. Why build it yourself when you can download the whole installation, already pre-configured? VMWare. VMware. vCenter Server. Spyware Removal Scan & Antispyware Software Download. As part of Symantec's commitment to your online protection, we are streamlining our product range to offer you fewer, better solutions. 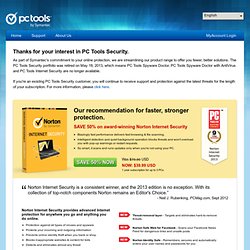 The PC Tools Security portfolio was retired on May 18, 2013, which means PC Tools Spyware Doctor, PC Tools Spyware Doctor with AntiVirus and PC Tools Internet Security are no longer available. If you're an existing PC Tools Security customer, you will continue to receive support and protection against the latest threats for the length of your subscription. For more information, please click here. SAVE 50% on award-winning Norton Internet Security. Windows Security. iOS Security. Digital security. Security+ Cryptix. A TINY BIT about Cryptography. Tech. Malware. 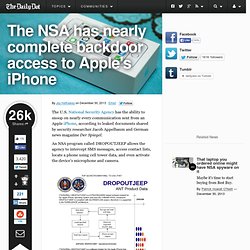 National Security Agency has the ability to snoop on nearly every communication sent from an Apple iPhone, according to leaked documents shared by security researcher Jacob Appelbaum and German news magazine Der Spiegel. An NSA program called DROPOUTJEEP allows the agency to intercept SMS messages, access contact lists, locate a phone using cell tower data, and even activate the device’s microphone and camera. According to leaked documents, the NSA claims a 100 percent success rate when it comes to implanting iOS devices with spyware. The documents suggest that the NSA needs physical access to a device to install the spyware—something the agency has achieved by rerouting shipments of devices purchased online—but a remote version of the exploit is also in the works. Update: Apple denies it helped build the NSA's iPhone backdoor.

One printer, one virus, one disabled Iraqi air defence. High performance access to file storage Did U.S. infowar commandos smuggle a deadly computer virus into Iraq inside a printer? 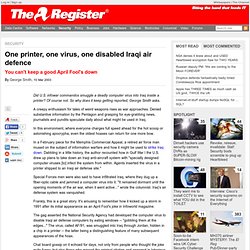 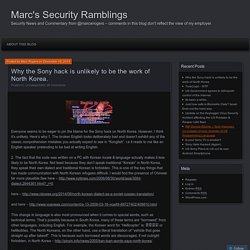 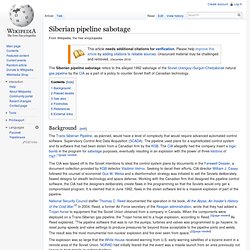 Background[edit] The Trans-Siberian Pipeline, as planned, would have a level of complexity that would require advanced automated control software, Supervisory Control And Data Acquisition (SCADA). Largest Cyber-Attack in History Hits Pro-Hong Kong Protest Websites. Websites supporting the pro-democracy protesters in Hong Kong have been hit with a series of DDoS attacks which have been described as the largest in history. 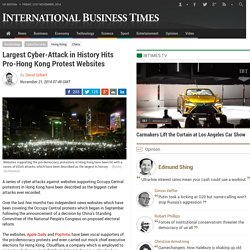 (Bobby Yip/Reuters) A series of cyber attacks against websites supporting Occupy Central protestors in Hong Kong have been described as the biggest cyber attacks ever recorded. Over the last few months two independent news websites which have been covering the Occupy Central protests which began in September following the announcement of a decision by China's Standing Committee of the National People's Congress on proposed electoral reform. The websites, Apple Daily and PopVote, have been vocal supporters of the pro-democracy protests and even carried out mock chief executive elections for Hong Kong. Cloudflare, a company which is employed to protect websites against distributed denial of service attacks, has revealed thatsince June, these two websites have been bombarded by attacks of unprecedented size. AF/91. AF/91 was a hoax about a computer virus which was allegedly used in the First Gulf War; its name refers to April Fool's Day. 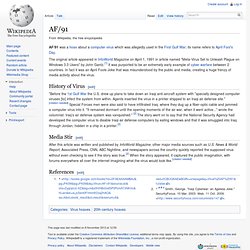 The original article appeared in InfoWorld Magazine on April 1, 1991 in article named "Meta-Virus Set to Unleash Plague on Windows 3.0 Users" by John Gantz.[1] It was purported to be an extremely early example of cyber warfare between 2 countries.