The Princess and the PearlTrees. Once upon a time there lived a multipassionate princess who read websites all over the internet. 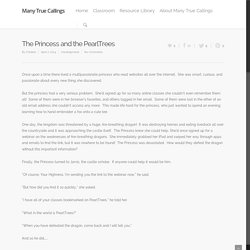 She was smart, curious, and passionate about every new thing she discovered. But the princess had a very serious problem. She’d signed up for so many online classes she couldn’t even remember them all! Some of them were in her browser’s favorites, and others tagged in her email. Some of them were lost in the ether of an old email address she couldn’t access any more. One day, the kingdom was threatened by a huge, fire-breathing dragon! Finally, the Princess turned to Jarvis, the castle scholar. “Of course, Your Highness, I’m sending you the link to the webinar now,” he said. “But how did you find it so quickly,” she asked.

“I have all of your classes bookmarked on PearlTrees,” he told her. “What in the world is PearlTrees?” “When you have defeated the dragon, come back and I will tell you.” And so he did… Tip: Think you might want to reference this later? Pearltrees - Collaborate & Discover. Pearltrees: #Pearltrees + #Android = TLF! Pearltrees Arrives On Android, Wants To Become The File Manager For The Post-PC Era. Pearltrees, the visual and collaborative library that lets you easily organize and bookmark information in tree-like structures, finally launched its Android app for phones and tablets today. 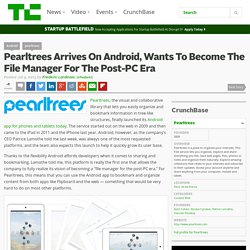 The service started out on the web in 2009 and then came to the iPad in 2011 and the iPhone last year. Android, however, as the company’s CEO Patrice Lamothe told me last week, was always one of the most requested platforms, and the team also expects this launch to help it quickly grow its user base. Thanks to the flexibility Android affords developers when it comes to sharing and bookmarking, Lamothe told me, this platform is really the first one that allows the company to fully realize its vision of becoming a “file manager for the post-PC era.” For Pearltrees, this means that you can use the Android app to bookmark and organize content from both apps like Flipboard and the web — something that would be very hard to do on most other platforms. Pearltrees for Android launch. 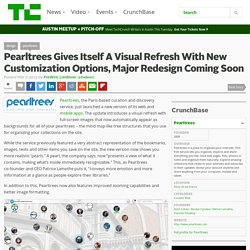 The update introduces a visual refresh with full-screen images that now automatically appear as backgrounds for all of your pearltrees – the mind map-like tree structures that you use for organizing your collections on the site. While the service previously featured a very abstract representation of the bookmarks, images, texts and other items you save on the site, the new version now shows you more realistic ‘pearls.” Lancement Botticelli. Pearltrees Goes 1.0, Launches Premium Accounts With Private Collections And Sharing. Curation and discovery service Pearltrees just announced the launch of its premium accounts. 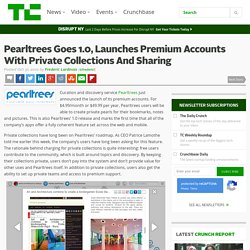 For $4.99/month or $49.99 per year, Pearltrees users will be able to create private pearls for their bookmarks, notes and pictures. This is also Pearltrees’ 1.0 release and marks the first time that all of the company’s apps offer a fully coherent feature set across the web and mobile. Private collections have long been on Pearltrees’ roadmap. As CEO Patrice Lamothe told me earlier this week, the company’s users have long been asking for this feature. The rationale behind charging for private collections is quite interesting: free users contribute to the community, which is built around topics and discovery. Pearltrees rolls out V1.0 with its Premium Membership. Just a few months after we sat down with Pearltrees CEO Patrice LaMothe for an interview about their topping of the US iPhone AppStore, Pearltrees have today announced that their social library has launched it’s v1.0, and is rolling out the long-awaited business model. 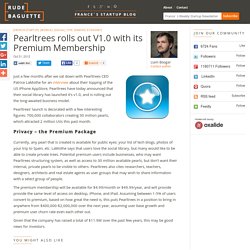 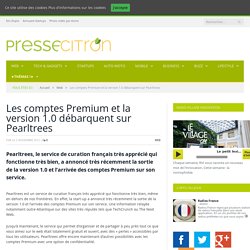 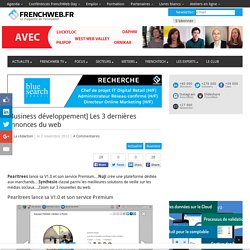 Pearltrees 1.0 offers Pearltrees Premium with privacy features. We have published several times about Pearltrees private and public beta version on the web, its updates and the launch of the mobile versions for iPad and iPhone. 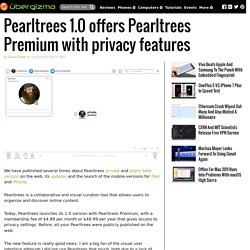 Pearltrees is a collaborative and visual curation tool that allows users to organize and discover online content. Today, Pearltrees launches its 1.0 version with Pearltrees Premium, with a membership fee of $4.99 per month or $49.99 per year that gives access to privacy settings. Before, all your Pearltrees were publicly published on the web. The new feature is really good news: I am a big fan of the visual user interface although I did not use Pearltrees that much, both due to a lack of time and a concern for privacy. The content that I collect in bookmarks or I flag in my Google reader remains private or is sharable with people I know. Stylish Web curation service Pearltrees launches a premium offering for private content sharing.

Pearltrees offers perhaps the most elegant and visual way of collecting and sharing online content available today, and now the French startup is launching premium accounts that give users more privacy, for a price. 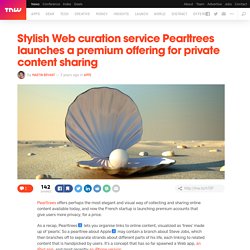 As a recap, Pearltrees lets you organise links to online content, visualized as ‘trees’ made up of ‘pearls’. Pearltrees Comes To The iPhone, Goes Beyond Bookmarking And Adds Photos, Notes, Offline Mode. Few startups make it through a year without a pivot or two these days. 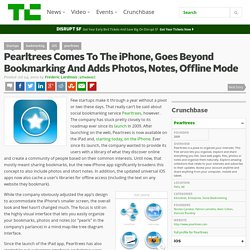 That really can’t be said about social bookmarking service Pearltrees, however. The company has stuck pretty closely to its roadmap ever since its launch in 2009. After launching on the web, Peartrees is now available on the iPad and, starting today, on the iPhone. Ever since its launch, the company wanted to provide its users with a library of what they discover online and create a community of people based on their common interests. Until now, that mostly meant sharing bookmarks, but the new iPhone app significantly broadens this concept to also include photos and short notes. Say Hello To Pearltrees For iPhone, A Place To Collect, Organize And Share Everything You Like. Pearltrees, the social library that lets people have at hand everything they like, announced the availability of the company’s iPhone app. Now, everything that interests you can be stored in your pocket. First launched on iPad in October, the free Pearltrees for iOS app is now universal.

With it, users can collect and share Web pages, photos, and notes into themed groups. From there, you may organize all of your interests into linked droplets that when put together are called “pearltrees.” Not surprisingly, the Pearltrees experience also includes the ability to see other users' content too. Pearltrees Comes To The iPhone, Goes Beyond Bookmarking And Adds Photos, Notes, Offline Mode (Frederic Lardinois/TechCrunch) Pearltrees lance son application iPhone. Pearltrees débarque sur iPhone. Pearltrees for iPhone. I have written about Pearltrees since the web application was in private beta back in April 2009, before the official launch in late 2009. To date, the free service counts more than 500,000 contributors and more than 25 million pearls.

Although I am not an avid user, however I love its aesthetics and the ease of use of its graphic interface. Content curation is a trending topic in the internet industry and Pearltrees is surely one of the most innovative startup to offer content curation and social networking based on the interest graph. Today, Pearltrees launched its iPhone application nine months after the release of the iPad version. All versions allow users to organize content found on the web in pearltrees, and each pearl is in fact a web page. With the release of the iPhone application, the company introduced new features: Knowing the popularity of Evernote, these two last features will make the usage even more interesting and valuable. Robert Scoble - Google+ - First look at Pearltrees' new iPhone app +Pearltrees is… Pearltrees Hits the iPhone, Lets You Share More. We’ve been long-standing fans of Pearltrees, the French startup that makes organizing content you find online into themes via shareable collections of linked ‘pearls’.

Now it’s bringing the experience to the iPhone and expanding the kinds of content that can be shared via the service. Like the browser-based and iPad versions of Pearltrees, the iPhone app allows you to collect and share Web pages in themed groups. You can search and explore other users’ content too, making it a serendipitous way of uncovering new things you never knew existed (see our review of the iPad app for a quick catch-up). Pearltrees expands interests-based social network to the iPhone - iPhone app article - Brad Spirrison. Since launching its interests-based social network less than three years ago, Paris-based Pearltrees has attracted more than 500,000 contributors who have posted more than 25 million pieces of digital content. The venture capital-backed collector community today launches a universal version of its app so it works on iPhone as well as iPad now.

Here’s how it works: As one who signed-up for Pearltrees relatively recently, I am more of an admirer of the service than a practitioner at this point. The notion of a social network that doesn’t emphasize personal connections but rather common interests is intriguing. If I am looking to collect information about the band Phish or advice on dog grooming, I like having the option to tap the opinions of enthusiasts rather than just those in my social graph. Still, it takes a bit of work to get a feel for everything. The iPhone app allows users to add their own “Pearls” of digital content and discover related “Pearltrees”. Charte d’utilisation de Pearltrees au collège X /au lycée Y. Twitter, Pearltrees et Viadeo en une image. [Entretien exclu] Pearltrees lève 5 millions d’euros.

C’est une nouvelle levée de fonds pour la start-up lancée en 2009. Pearltrees injects organization into your social interest graph. You’ve heard of the social graph, now meet the interest graph. While Facebook and Google+ have built their social networks around collecting and networking your contacts, there’s a new platform emerging where instead of leveraging friends, it leverages content. Your mind should immediately turn to Pinterest and its collective visual bookmarking clones (if it doesn’t, you haven’t been using the Internet enough). These sites aren’t concerned with helping you find and communicate with your friends — that’s really just a side benefit. "Pearltrees lève 5 millions d'euros pour engager sa stratégie de monétisation". When is the social curation bubble going to burst?

You just can’t move for social curation services right now. The biggest noise might be coming from Pinterest, which is growing like a weed — but whether it’s the new-look Delicious, Switzerland’s Paperli, shopping curation site Svpply, image service Mlkshk or another site, the fact is that almost everybody seems to want to help you save and sort and share the things you find on the web right now. With this swirl of activity, then, it’s no surprise to hear that Parisian service Pearltrees — slogan “collect, organize, discover” — has just raised another $6 million of funding, led by local conglomerate Groupe Accueil. The company, which has been running in public since 2009, welcomed the injection of funds as a way to help expand and scale up its system for bookmarking and organizing, which is based around a clustered visual interface.

Pearltrees Raises $6.7M For Its “Collaborative Interest Graph” Pearltrees, a company offering a novel interface for sharing and finding content, has raised 5 million euros ($6.7 million US) in new funding. The basic unit of the Pearltrees service is the pearl, which is basically a bookmark. Users can assemble these pearls into trees based around a topic. What the heck is an interest graph? Pearltrees raises $6.6M to show us.

Social curation startup Pearltrees has just sealed a deal for €5 million (around $6.6 million), all in the name of creating a better interest graph. Much is being made in current social media circles of the “interest graph” concept, which is more about what you know than who you know, and which purportedly has strong connections to purchase intent and other matters of concern to online marketers. Social Bookmarking And Curation: Pinterest, Pearltrees, GimmeBar. Quote of the Day: "I get ideas about what to buy for others for the holidays from websites with best of lists (like top ten gifts for mom).” Pearltrees for iPad. Pearltrees Brings Visual Content Curation And Discovery Platform To The iPad.