Pearltrees Introduces A New Design And HTML5 In Latest Update. Social Curation Service Pearltrees Revamps Web and Mobile Apps. Pearltrees, the service that allows you to arrange Web content, photos and more (‘pearls’) into mindmap-style ‘trees’, has updated its Web and mobile apps today in order to bring a more seamless user experience and new features to the platform. 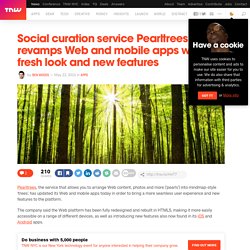 The company said the Web platform has been fully redesigned and rebuilt in HTML5, making it more easily accessible on a range of different devices, as well as introducing new features also now found in its iOS and Android apps. It seems it’s becoming a bit of a habit for Pearltrees to significantly revamp its website at about this time each year, and this time around it’s gone all-out to make collections, and collecting, “simpler, more accessible and more shareable,” CEO and co-founder Patrice Lamothe said. As well as rebuilding it using HTML 5, there are now new features like ‘extended drag-and-drop’ which allow you to quickly add ‘pearls’ from your hard drive, the Web or a document. ➤ Pearltrees | Google Play | App Store. Pearltrees : Pearltrees 2.0 is out! ... Pearltrees releases a new version, without any pearls nor trees.

The Paris-based startup founded in 2009 once declared: “We focus on the visual potential of Pearltrees to let people dive deeply into their interests and nearly feel them”. 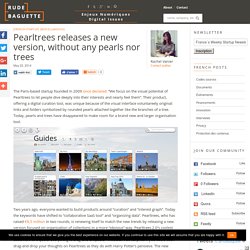 Their product, offering a digital curation tool, was unique because of the visual interface voluntareely original: links and folders symbolized by rounded pearls attached together like the branches of a tree. Today, pearls and trees have disappeared to make room for a brand new and larger organisation tool. Two years ago, everyone wanted to build products around “curation” and “interest graph”. Today the keywords have shifted to “collaborative SaaS tool” and “organizing data”.

Pearltrees, who has raised €8,5 million in two rounds, is renewing itself to match the new trends by releasing a new version focused on organization of collections in a more “obvious” way. Why giving up the core of the product, after 4,5 years of existence and 1,7 million users? Pearltrees Radically Redesigns Its Online Curation Service To Reach A Wider Audience.

Pearltrees, the Paris-based online curation service that launched in late 2009, was always known for its rather quirky Flash-based interface that allowed you to organize web bookmarks, photos, text snippets and documents into a mindmap-like structure. 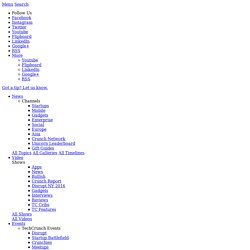 For users who got that metaphor, it was a very powerful service, but its interface also presented a barrier to entry for new users. Today, the company is launching a radical redesign that does away with most of the old baggage of Pearltrees 1.0. Gone are the Flash dependency, the tree diagrams, the little round pearls that represented your content and most everything else from the old interface. Here is what Pearltrees 1.0 looked like: And here is the new version: Pearltrees’ mission is still to allow you to organize everything you want on the service (in that respect, it almost competes with Evernote). 3. “We took what everybody liked about the old version and put it into a visualization that everybody could grasp right away,” Lamothe said.