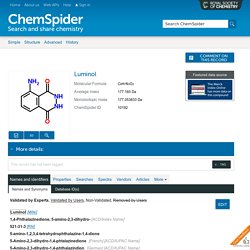 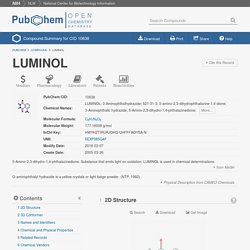 It is calculated as the sum of the mass of each constituent atom multiplied by the number of atoms of that element in the molecular formula. Molecular Formula: A chemical formula is a way of expressing information about the proportions of atoms that constitute a particular chemical compound, using a single line of chemical element symbols, numbers. XLogP3: Computed Octanol/Water Partition Coefficient Hydrogen Bond Donor Count: Hydrogen Bond Donor count Hydrogen Bond Acceptor Count: Hydrogen Bond Acceptor count Rotatable Bond Count: Rotatable bond is defined as any single non-ring bond, bounded to nonterminal heavy (i.e., non-hydrogen) atom. Exact Mass: The exact mass of an isotopic species is obtained by summing the masses of the individual isotopes of the molecule. Monoisotopic Mass: Topological Polar Surface Area: 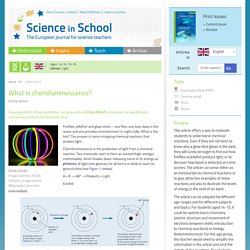 Fireflies, jellyfish and glow sticks – one flies, one lives deep in the ocean and one provides entertainment in night clubs. What is the link? The answer is some intriguing chemical reactions that produce light. Chemiluminescence is the production of light from a chemical reaction. Two chemicals react to form an excited (high-energy) intermediate, which breaks down releasing some of its energy as photons of light (see glossary for all terms in bold) to reach its ground state (see Figure 1, below). Luminol Chemiluminescence Test for Blood. By Anne Marie Helmenstine, Ph.D. 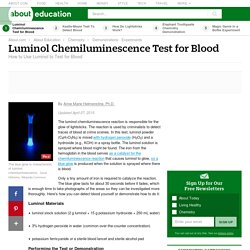 Updated April 07, 2015. The luminol chemiluminescence reaction is responsible for the glow of lightsticks. The reaction is used by criminalists to detect traces of blood at crime scenes. In this test, luminol powder (C8H7O3N3) is mixed with hydrogen peroxide (H2O2) and a hydroxide (e.g., KOH) in a spray bottle. The luminol solution is sprayed where blood might be found.

Only a tiny amount of iron is required to catalyze the reaction. Luminol Materials luminol stock solution (2 g luminol + 15 g potassium hydroxide + 250 mL water)3% hydrogen peroxide in water (common over-the-counter concentration)potassium ferricyanide or a sterile blood lancet and sterile alcohol pad Performing the Test or Demonstration In a clear test tube or cup, mix 10 ml of the luminol solution and 10 ml of the peroxide solution. Luminol. Forensic Science - Luminol (Blood) The search for the presence of blood at a crime scene is normally done by close visual examination. 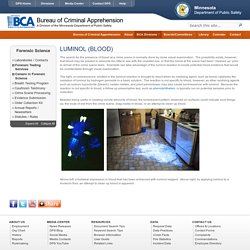 The possibility exists, however, that blood may be present in amounts too little to see with the unaided eye, or that the blood at the scene had been “cleaned up” prior to arrival of the crime scene team. Scientists can take advantage of the luminol reaction to locate potential blood evidence that would be undetectable through visual examination. The light, or luminescence, emitted in the luminol reaction is thought to result when an oxidizing agent, such as blood, catalyzes the oxidation of luminol by hydrogen peroxide in a basic solution.

The reaction is not specific to blood, however, as other oxidizing agents such as sodium hypoclorite (bleach), certain metals, and plant peroxidases may also cause luminescence with luminol. Because the reaction is not specific to blood, a follow up presumptive test, such as phenolphthalein, is typically run on potential samples prior to collection. Liquid Light - Chemical Reaction with Luminol. Detecting blood using luminol. CurioCity - CurioCité. Above: Image © Antek123, Wikimedia If you've seen a crime scene detective show like CSI, you are probably already familiar with luminol — that substance that glows greenish-blue on a surface, magically revealing where blood once use to be. 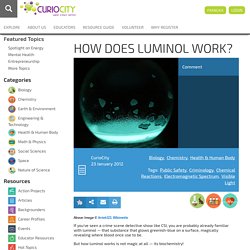 But how luminol works is not magic at all — its biochemistry! Luminol is used by crime scene investigators to locate blood — even if it has been removed or cleaned up years ago! This is because luminol is able to react with the iron in haemoglobin - an oxygen-carrying and iron-containing protein in red blood cells. Did You Know? Luminol will fluoresce if there is one drop of blood within a container of 999,999 drops of water! Chemiluminescence is the emission of light that results from a chemical reaction that does not involve the production of heat or a flame. Did You Know? But the glow of luminol doesn't 100% guarantee that what it is detecting is blood. So criminals, take note!