ESPN Fires Curt Schilling Over an Offensive Social Media Post. Photo Curt Schilling, a former All-Star pitcher and one of the highest-profile baseball analysts on ESPN, was fired from the network Wednesday, a day after he drew intense criticism for promoting offensive commentary on social media. 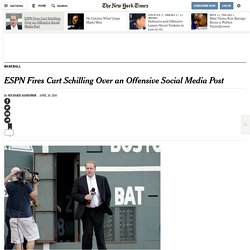 Schilling, who had worked for the network since 2010 and most recently offered analysis on “Monday Night Baseball,” was dismissed after sharing a Facebook post this week that appeared to respond to the North Carolina law that bars transgender people from using bathrooms and locker rooms that do not correspond with their birth genders. The post showed an overweight man wearing a wig and women’s clothing with parts of the T-shirt cut out to expose his breasts.

It says: “LET HIM IN! To the restroom with your daughter or else you’re a narrow-minded, judgmental, unloving racist bigot who needs to die.” To that, Schilling added: “A man is a man no matter what they call themselves. Schilling, through a spokeswoman, declined to comment. Last year, David H. Conor McGregor tweets 'I have decided to retire young' 1:55 AM ETBrett OkamotoESPN Staff Writer CloseMMA columnist for ESPN.com Analyst for "MMA Live" Covered MMA for Las Vegas Sun print UFC featherweight champion Conor McGregor will not fight Nate Diaz at UFC 200 on July 9 in Las Vegas. 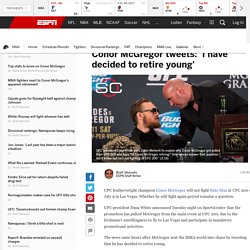 Whether he will fight again period remains a question. UFC president Dana White announced Tuesday night on SportsCenter that the promotion has pulled McGregor from the main event at UFC 200, due to the Irishman's unwillingness to fly to Las Vegas and participate in mandatory promotional activities. The news came hours after McGregor sent the MMA world into chaos by tweeting that he has decided to retire young. ESPN has attempted to contact McGregor and members of his camp, but no one was available for immediate comment. White, meanwhile, said he had been in communication with McGregor's management throughout Tuesday.

"We pulled Conor McGregor from UFC 200 and we're working on other fights right now," White said. "Is Conor retiring?

Tiny Motor Powers a New Threat to Cycling Races. A grueling cycling race is somewhat less grueling if your bike is a motorcycle. 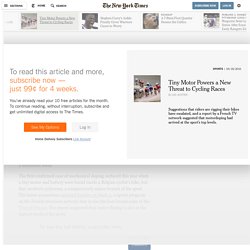 Understanding this, some cunning cyclists may be turning the sport into Nascar on two wheels by surreptitiously giving their bikes a motorized boost. The first confirmed case of mechanical doping surfaced this year when a tiny motor and battery were found inside a Belgian cyclist’s bike, but that involved cyclocross, a comparatively minor branch of the sport. The latest accusations emerged Sunday on Stade 2, a sports program on the French television network that is also the host broadcaster of the Tour de France. The report suggested that motor doping is also at the highest levels of the sport.

Hope that's a lesson to others. – wilsonlok 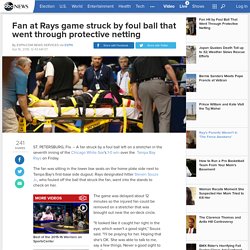 PETERSBURG, Fla. -- A fan struck by a foul ball left on a stretcher in the seventh inning of the Chicago White Sox's 1-0 win over the Tampa Bay Rays on Friday. The fan was sitting in the lower box seats on the home plate side next to Tampa Bay's first-base side dugout. Rays designated hitter Steven Souza Jr., who fouled off the ball that struck the fan, went into the stands to check on her. The game was delayed about 12 minutes so the injured fan could be removed on a stretcher that was brought out near the on-deck circle. "It looked like it caught her right in the eye, which wasn't a good sight," Souza said. Said White Sox manager Robin Ventura: "I know it didn't sound good at all. After an in-depth study last year, when several fans were hurt by broken bats and foul balls, Major League Baseball recommended the extension of ballpark safety netting to the ends of both dugouts and anywhere within 70 feet of home plate.