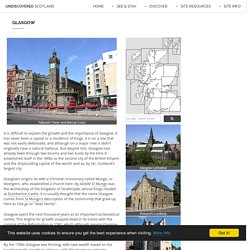 It has never been a capital or a residence of Kings, it is on a site that was not easily defensible, and although on a major river it didn't originally have a natural harbour. But despite this, Glasgow had already been through two booms and two busts by the time it established itself in the 1800s as the second city of the British Empire and the shipbuilding capital of the world: and as, by far, Scotland's largest city. Glasgow's origins lie with a Christian missionary called Mungo, or Kentigern, who established a church here. By AD600 St Mungo was the Archbishop of the Kingdom of Strathclyde, whose Kings resided at Dumbarton Castle. It is usually thought that the name Glasgow comes from St Mungo's description of the community that grew up here as Clas-gu or "dear family". Time Out Glasgow - Events, Attractions and What's on in Glasgow. Glasgow Guide: Hotels and City Tourist Information Scotland, UK.

Glasgow. Coordinates: Glasgow (/ˈɡlɑːzɡoʊ, ˈɡlæz-/;[4] Scots: Glesca; Scottish Gaelic: Glaschu) is the largest city in Scotland, and the 4th largest in the United Kingdom, and, as of the 2011 census, the Scottish city with the highest population density with 3,395 people per square kilometre.[5] It is situated on the River Clyde in the country's West Central Lowlands. 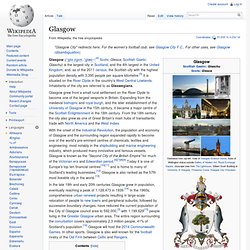 Inhabitants of the city are referred to as Glaswegians. Glasgow grew from a small rural settlement on the River Clyde to become one of the largest seaports in Britain. Glasgow City Council Homepage. The Glasgow Web Site.