Williams Cedar is a law firm composed of caring and compassionate trial lawyers who represent victims only. Our staff is dedicated to protecting the personal, civil, and consumer rights of clients throughout New Jersey and Pennsylvania. We handle cases pertaining to serious injury, civil rights, insurance contract claims and other litigation in fields, such as environmental and toxic torts, product liability, legal and medical malpractice, whistleblower protection, and wage and hour claims. We work effortlessly to help our clients secure maximum compensation.

South Jersey Car Accident Lawyers. As the number of individuals using recreational and prescription drugs continues to rise, it is no surprise that increased incidence of “drugged” driving has resulted in thousands of car accidents each year. 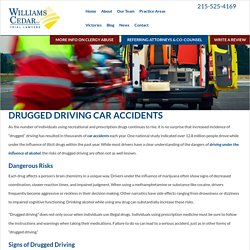 One national study indicated over 12.8 million people drove while under the influence of illicit drugs within the past year. Philadelphia Police Brutality Lawyers. Governor to Look at Fracking and Cancer Risk. In many parts of Pennsylvania, the Marcellus Shale gas development boom has led to an increase in the amount of fracking, a process by which gas and oil are removed from shale rock. 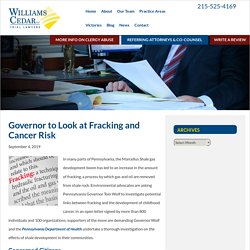 Environmental advocates are asking Pennsylvania Governor Tom Wolf to investigate potential links between fracking and the development of childhood cancer. In an open letter signed by more than 800 individuals and 100 organizations, supporters of the move are demanding Governor Wolf and the Pennsylvania Department of Health undertake a thorough investigation on the effects of shale development in their communities. Concerned Citizens According to the public letter, more than 12,000 wells have been fracked or drilled for oil and natural gas over the last 15 years in southwestern Pennsylvania alone. Northwest Pennsylvania has seen equally dramatic volume. Wenonah Parents Urge School to Remove Gym Floors with Mercury.

Parents from Wenonah, New Jersey attended a town meeting on Tuesday to urge the Wenonah Board of Education to remove the school gym floors that contain mercury. 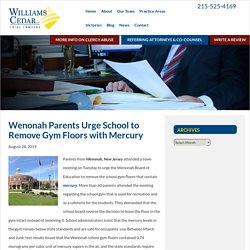 More than 60 parents attended the meeting regarding the school gym that is used for recreation and as a cafeteria for the students. They demanded that the school board reverse the decision to leave the floor in the gym intact instead of removing it. Cherry Hill Car Accident Lawyers. Each September, the new school year brings the return of school buses on the roads and increased motor vehicle, bicycle, and pedestrian traffic in neighborhoods. 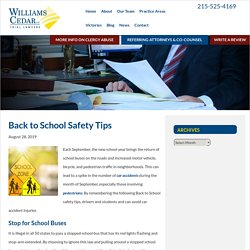 This can lead to a spike in the number of car accidents during the month of September, especially those involving pedestrians. By remembering the following Back to School safety tips, drivers and students and can avoid car accident injuries. Stop for School Buses It is illegal in all 50 states to pass a stopped school bus that has its red lights flashing and stop-arm extended. Nitrate Pollution in Drinking Water Linked to Cancer. Nitrate pollution is linked to 12,594 cases of cancer each year, according to a groundbreaking new study by the Environmental Working Group (EWG). 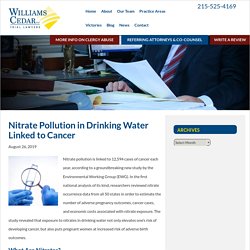 In the first national analysis of its kind, researchers reviewed nitrate occurrence data from all 50 states in order to estimate the number of adverse pregnancy outcomes, cancer cases, and economic costs associated with nitrate exposure. The study revealed that exposure to nitrates in drinking water not only elevates one’s risk of developing cancer, but also puts pregnant women at increased risk of adverse birth outcomes. What Are Nitrates? ACLU Sues PA State Police for Racial Profiling.

The American Civil Liberties Union (ACLU) has filed suit against the Commonwealth of Pennsylvania for a pattern of unlawful civil immigration enforcement by state police. 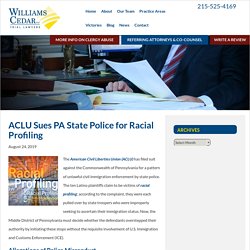 The ten Latino plaintiffs claim to be victims of racial profiling; according to the complaint, they were each pulled over by state troopers who were improperly seeking to ascertain their immigration status. Now, the Middle District of Pennsylvania must decide whether the defendants overstepped their authority by initiating these stops without the requisite involvement of U.S. Immigration and Customs Enforcement (ICE). South Jersey Car Accident Lawyers. The National Highway Traffic Safety Administration (NHTSA) estimates that every year in the U.S., more than three million people are injured in motor vehicle crashes. 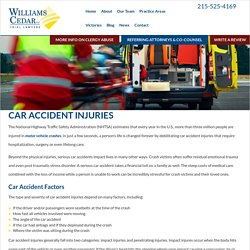 In just a few seconds, a person’s life is changed forever by debilitating car accident injuries that require hospitalization, surgery, or even lifelong care. Beyond the physical injuries, serious car accidents impact lives in many other ways. Crash victims often suffer residual emotional trauma and even post traumatic stress disorder. A serious car accident takes a financial toll on a family as well. Cherry Hill Personal Injury Lawyers. Every day, thousands of people slip and fall in stores, public buildings, hospitals, and other commercial businesses. 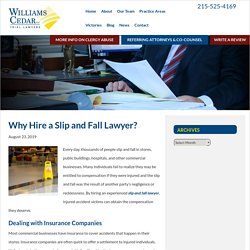 Many individuals fail to realize they may be entitled to compensation if they were injured and the slip and fall was the result of another party’s negligence or recklessness. By hiring an experienced slip and fall lawyer, injured accident victims can obtain the compensation they deserve. Dealing with Insurance Companies Most commercial businesses have insurance to cover accidents that happen in their stores. Insurance companies are often quick to offer a settlement to injured individuals. Proving Liability. New Rules for Coal Ash Weaken Health Safeguards. The U.S. 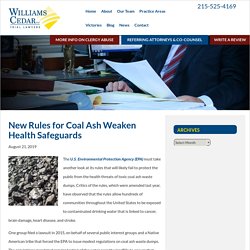 Environmental Protection Agency (EPA) must take another look at its rules that will likely fail to protect the public from the health threats of toxic coal ash waste dumps. Critics of the rules, which were amended last year, have observed that the rules allow hundreds of communities throughout the United States to be exposed to contaminated drinking water that is linked to cancer, brain damage, heart disease, and stroke. 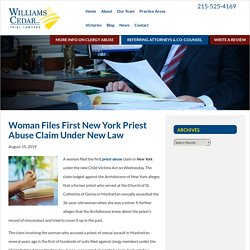 The claim lodged against the Archdiocese of New York alleges that a former priest who served at the Church of St. Mercury Found in Multiple New Jersey School Gym Floors. Recent reports show that multiple New Jersey school districts discovered that their gym floors contain mercury, which may pose significant health dangers to students and staff members. Since the 1960s and as late as 2006, polyurethane flooring has been installed in many schools for use as gym flooring, multipurpose rooms, auditoriums, and cafeterias. The flooring contains phenyl mercuric acetate which emits a mercury vapor that may cause health issues including damage to the central nervous system, kidneys, lungs, and much more.

The Who’s Who in Philly Labor Show. Avoiding Accidents at Four Way Intersections. Traveling in high traffic areas presents a unique safety risk for drivers. One of the most accident-prone traffic locations is a four-way intersection without a traffic light. At a four-stop sign intersection, it can be difficult for traffic to flow smoothly, as some drivers are unsure which car should proceed first through the intersection. States, Military Clash on Cleanup of Toxic Chemicals. Toxic contamination of drinking water gained national attention in 2016 when residents of Flint, Michigan began investigating problems with their drinking water. Today, a costly remedial effort is underway to repair damaged plumbing, provide bottled water, and fight extensive court battles over liability for damage to health and property.

Unfortunately, similar situations appear to be playing out across the country. High Lead Levels Found in Newark Water Supply Despite Use of Filters. High lead levels continue to taint the water supply in neighborhoods of Newark, New Jersey despite the use of filters. The EPA tested the water supply of households in the city that have old lead pipes and discovered that two-thirds of the homes still register high levels of lead even with the implementation of filters. On Sunday, it was announced that bottled water would be distributed to residents on Monday afternoon. Who is Liable for an Accident at a Hotel? Summer is a popular time to go on vacation and enjoy some time away from the responsibilities of everyday life. However, those who plan on traveling and staying in a hotel should still be aware of the related hazards. Slip and fall accidents can occur anywhere, but in hotels, there are numerous slipping hazards that can cause guests to fall in various locations on the premises.

Philadelphia Police Brutality Lawyers. Liability Slip and Fall Accidents at Sport Facilities. Commercial businesses are frequently the scene of slip and fall accidents. When the public has access to a gathering space, there is a greater likelihood that an accident may occur. With businesses such as large sports facilities, including stadiums or arenas, slip and fall risks are often present. Unsafe Conditions. Philadelphia Refinery Fire May Contaminate New Jersey Water Supply.