Is it ethical to genetically modify farm animals for agriculture? Genetic engineering refers to the direct manipulation of an organism’s genes to alter or enhance certain characteristics. 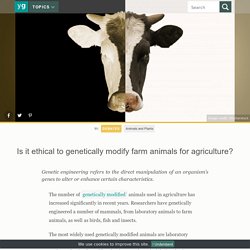 The number of genetically modified? Animals used in agriculture has increased significantly in recent years. Researchers have genetically engineered a number of mammals, from laboratory animals to farm animals, as well as birds, fish and insects. Unspinning the Web of Spider-Goat. Breeding transgenic goats for spider silk is unethical, and passing surplus goats onto the public food chain unsafe; the project has never been subject to regulatory risk assessment and there is not a single report characterizing the transgenic sequences in the spider-goats’ genome Dr. 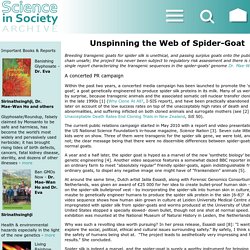 Mae-Wan Ho A concerted PR campaign Within the past two years, a concerted media campaign has been launched to promote the ‘spider-goat’, a goat genetically engineered to produce spider silk proteins in its milk. Genetically Engineered "Spider Goat" Spins Out Elastic Material Superior to Kevlar. It just might be that in a few years time the fashion world will embrace spider goat silk. 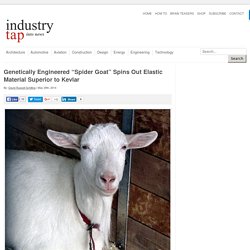 The world’s top models will ply fashion runways of New York, Paris, Tokyo and Beijing dressed in spider goat silk, the rich and famous will show off the new fashion at Hollywood galas and the rest of humanity will look on enviously. A “Spider Goat” named Freckles is part spider and part goat, created by Randy Lewis, professor of genetics at Utah State University, is an attempt to produce “dragline silk” spiders used to catch themselves when they fall. The material is stronger than Kevlar, a synthetic fiber used as a reinforcing agent in tires, rubber products, and protective gear. Spider Silk. Applications of Spider Silk Humans have been making use of spider silk for thousands of years. 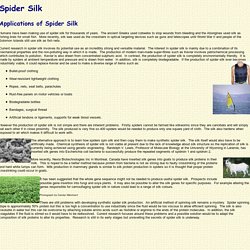 The ancient Greeks used cobwebs to stop wounds from bleeding and the Aborigines used silk as fishing lines for small fish. More recently, silk was used as the crosshairs in optical targeting devices such as guns and telescopes until World War II and people of the Solomon Islands still use silk as fish nets. Current research in spider silk involves its potential use as an incredibly strong and versatile material. The interest in spider silk is mainly due to a combination of its mechanical properties and the non-polluting way in which it is made. The goats with spider genes and silk in their milk.