These 7 clever gadgets will help you keep track of your valuables. 1 December '13, 09:30pm Follow. 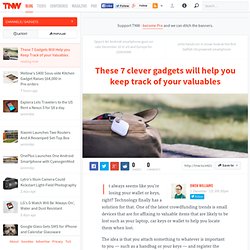 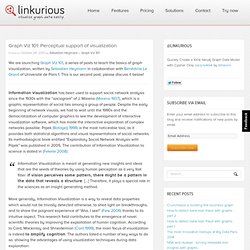 This is our second post, please discuss it below! Make Your LinkedIn Profile Irresistible. Actualités - Expertiseurs du Crédit - Détecteur de failles des crédits immobiliers. An Interesting Visual Guide to What Colours Communicate. BYOD As We Know It Is Dead. Embedding a Sales Process into Your Culture. Professional Outside Sales. Too often we are guilty of searching for a quick fix or a silver bullet to drive performance improvement. 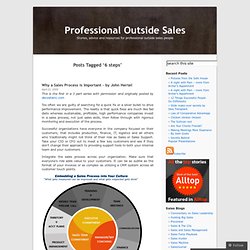 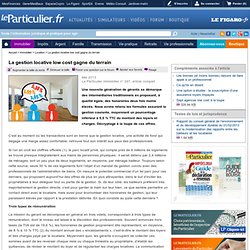 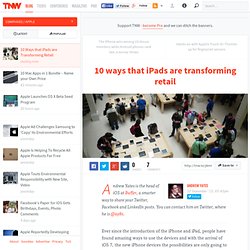 You can contact him on Twitter, where he is @ay8s. Ever since the introduction of the iPhone and iPad, people have found amazing ways to use the devices and with the arrival of iOS 7, the new iPhone devices the possibilities are only going to increase. Apple in the past has showcased examples of its devices being used throughout the world, ranging from improving the lives of people who are blind to improving education within schools.

After a recent visit to an Apple Store I found myself using the iPad Smart Signs, which show off products throughout the store. Can’t code but want an app? Infinite Monkeys is now the world’s largest DIY app publisher. 11 September '13, 07:32am Follow. 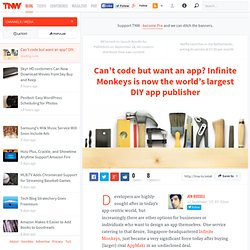 Home Automation. You'll Never Look At Airplanes The Same After This Film. The Wright Brothers did extensive testing on the mechanics of flight in the early 1900s, trying to figure out how a machine could create enough lift to sustain flight, and how it would react in the air. 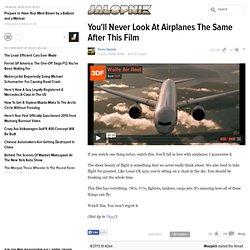 After testing pieces of wood in a rudimentary wind tunnel, the Wrights designed a machine which they believed could stay in the air for at least a few seconds. Thus, in 1903, the Wrights took their machine to the windiest place in the United States, Kitty Hawk, North Carolina...knowing full well that only with the help of strong winds would their machine have any chance of sustaining flight. 6 home automation companies merge into 1 super company for the super rich. Six home technology companies are merging to form one supercompany that caters to the superrich. 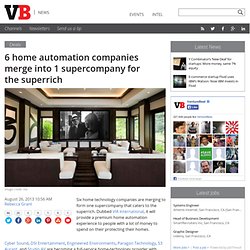 Dubbed VIA International, it will provide a premium home automation experience to people with a lot of money to spend on their protecting their homes. Cyber Sound, DSI Entertainment, Engineered Environments, Paragon Technology, S3 Aurant, and Studio AV are becoming a full-service home-technology provider with distribution across the country, or at least where “ultrahigh net worth clients” live. Before the merger, the companies were based in regions across the Western United States: Colorado, Utah, Northern and Southern California, Arizona, and Montana. They build and install systems for home movie theaters, speaker systems, lighting control, security, and energy management. “The merger of leading home technology integrators to form VIA International will transform the entire residential systems industry,” Randy Stearns, the CEO and founding partner of VIA International said in a statement.

The greatest mystery of the Inca Empire was its strange economy. IT Governance is Killing Innovation - Andrew Horne and Brian Foster. By Andrew Horne and Brian Foster | 10:00 AM August 22, 2013 Recent CEB research shows that work has become much more interdependent — employees increasingly need to tap a broader array of internal and external colleagues and partners to be successful in their jobs. 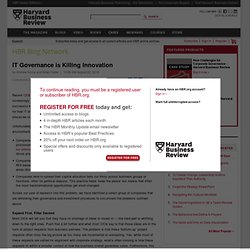 The emergence of this new work environment has significant implications for how IT should enable business growth and, more specifically, for the kinds of investments IT should be making to support employees. Unfortunately, when it comes to IT’s ability to allocate investments in response to the new work environment, traditional governance processes prove grossly outdated. Some of the key challenges: Companies don’t identify the very best ideas for investment because most capital allocation processes start with business partners’ existing ideas about projects to fund. Yes, Managing IT Is Your Job - Brad Power. By Brad Power | 12:00 PM August 21, 2013 In order to see the future more clearly, it’s almost always helpful to look back — and this certainly goes for IT and its ever-increasing impact on operations, and ultimately on competitive advantage. 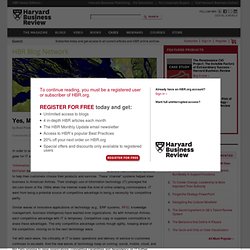 “Information Technology Changes the Way You Compete” was a trailblazing HBR article by Warren McFarlan back in the early 1980s. It told how American Airlines and others had introduced systems to help their customers choose their products and services. Infographic: 8 Of History's Biggest Design Failures. Frank Lloyd Wright famously observed that "A doctor can bury his mistakes, but an architect can only advise his clients to plant vines.” And that was long before the Internet stripped strategically placed foliage from its already limited power to cover tracks. Wright’s black witticism aside, an architect’s mistakes could prove far more consequential than matters of landscaping.

After all, if a building fails and collapses, that can cost lives. Ideally though (as long as you’re not the architect), such mistakes can be thought of as “learning experiences.” Kibardindesign. The White & White Clock designed by Vadim Kibardin is a modern 3D interpretation of the traditional digital clock. Digital wall/desk white LED clock with white frame digits. Nothing else, simply time. White & White Clock is a clock with an alarm and time display mode 24 hour. 10 Mysterious Artifacts That Are Allegedly Alien. Mysteries Some say alien life forms have visited Earth throughout history. However, such claims are difficult to prove. Most UFO sightings and abductions are easy to dismiss as hoaxes or simple misunderstandings.

But what about the times when the little green men actually leave something behind? Selective Home Automation Consoles - The WigWag System is Expandable, Sophisticated and Simple. Ten Questions to Ask in an Interview to Get Hired. I’ve done my fair share of interviews, even though I’ve only worked for two companies after college.

20 Parallax iOS 7 Wallpapers Ready to Download. 40 Maps That Will Help You Make Sense of the World. 50 New Tools Democratizing Data Analysis & Visualization. You Should Be Afraid of Artificial Intelligence. Today's CIO Needs to Be the Chief Innovation Officer - Daniel Burrus. By Daniel Burrus | 11:00 AM July 30, 2013. Dossier-surpopulation.

Canary: A Simple, Elegant Home Security System That Works With Your iPhone. The Science of Breaking Out of Your Comfort Zone (and Why You Should) Automated Home » New London Smart App-artment Demos Home Automation Heaven. Home Automation: Guidebook To a Growing Trend. How to request a refund for an iTunes or App Store purchase. Watch This Stop-Motion Teardown Of A 3.2L Porsche Carrera Engine. Please enable JavaScript to watch this video. Motes: The Wireless Helpers That Will Change Your Life. NASA Admits Alcubierre Drive Initiative: Faster Than The Speed Of Light. StickNFind - Welcome to StickNFind, StickNFind Pro, and Meter Plug. 3 Rules to Building a Value Proposition that Sells Like Crazy. 20 Modern And Contemporary Cube-Shaped Houses. Online Training.

Tableau de bord et indicateurs professionnels. Why Teaching Makes You Smarter. 7 Great Health Apps for Your iPhone. Neuroscientist thinks human head transplant surgery is finally possible. Want to connect your home? Here are 3 devices that will give you the most bang for your buck. How to Make a Customized Google Map. Welcome.

Rethinking Security for the Internet of Things - Chris Clearfield. Intel's working on DIY programmable home automation, we go eyes-on with its proof-of-concept (video) What is a Dashboard? WigWag and the future of controlling the connected home. Apple GazetteSteve Jobs Quotes: The Ultimate Collection » Apple Gazette. 4 Reasons to Offer Employees Flexible Schedules. Smart window startup View raises another $60M led by Corning. Goji Is A Smart Lock For Your Home That Has Nothing To Do With Berries. Livescribe Sky WiFi Smartpen review. Foursquare's Awesome Time Machine Visualizes All Your Check-Ins. Good Leaders Don't Use Bad Words - Michael Schrage. The Supermaterial That Could Make Plastic Obsolete Is... Mushrooms? Canada's NFB releases McLaren's Workshop for iPad, lets you create your own animated films. Amazon introduces Storyteller tool to turn scripts into storyboards. The Supermaterial That Could Make Plastic Obsolete Is... Mushrooms?

The World's Most Bizarre Aircraft Graveyards.