The attorneys at Wildes & Weinberg are experts in litigating complex federal cases. With an over 50 years of experience .

Wildes & Weinberg - All You Need To Know About PERM Labor Certification. Immigration Laws Amongst umpteen number of steps that one has to follow to obtain employment rights in a different country, obtaining a PERM Certificate is a part of the multi faceted process. 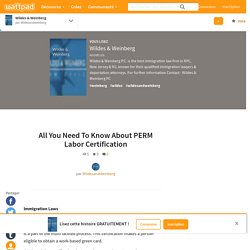 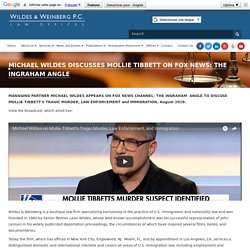 View the broadcast, which aired live: Wildes & Weinberg is a boutique law firm specializing exclusively in the practice of U.S. immigration and nationality law and was founded in 1960 by Senior Partner Leon Wildes, whose best-known accomplishment was his successful representation of John Lennon in his widely publicized deportation proceedings, the circumstances of which have inspired several films, books, and documentaries. In addition to running a highly successful immigration law practice, Michael is also of counsel to Lincoln Center for the Performing Arts and two international/corporate law firms. Despite difficulties currently being encountered in dealing with U.S. immigration authorities, Wildes & Weinberg has maintained an extraordinary track record for success for its cases. Immigration Attorney: Everything about O-1A visa in the USA. Why Do You Need to Hire an Immigration Lawyer? – Wildes and Weinberg. Immigration attorneys don’t practice under the U.S. immigration authorities. 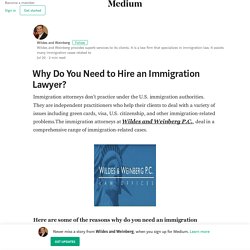 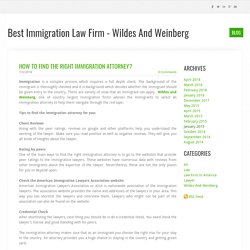 The background of the immigrant is thoroughly checked and it is background which decides whether the immigrant should be given entry in the country. There are variety of visas that an immigrant can apply. Is Zero Tolerance Policy Destroying United States of America? The immigration climate of the US has divided not only the government but the country itself. 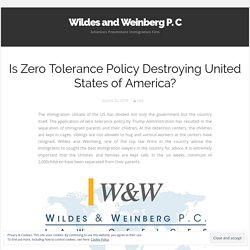 The application of zero tolerance policy by Trump Administration has resulted in the separation of immigrant parents and their children. At the detention centers, the children are kept in cages, siblings are not allowed to hug and various workers at the centers have resigned. Wildes and Weinberg, one of the top law firms in the country advise the immigrants to sought the best immigration lawyers in the country for advice.

It is extremely important that the children and families are kept safe. In the six weeks, minimum of 2,000children have been separated from their parents. Wildes & Weinberg - The latest immigration policy change might lead to immigrants shunning medical care. The lastest news on the immigrants scope is that the Trump administration is contemplating a change in the policy. 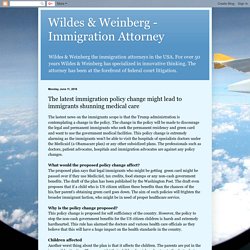 The change in the policy will be made to discourage the legal and permanent immigrants who seek the permanent residency and green card and want to use the government medical facilities. This policy change is extremely alarming as the immigrants won't be able to visit the hospitals of specialists doctors under the Medicaid (a Obamacare plan) or any other subsidized plans. Wildes & Weinberg P.C. has secured an O-1 petition approval on behalf of Vanesa Lorenzo. ALL ABOUT EB-5 OR THE INVESTOR VISA. California government sued by Trump Administration for protecting the immigrants.

The recent update in immigration saw US Justice Department sue California over its sanctuary city laws. 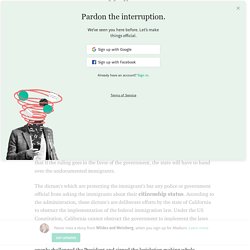 California government sued by Trump Administration for protecting the immigrants. Wildes & Weinberg Law Firm — The Name Of Trust And Reliability. Facing any kind of immigration problem? 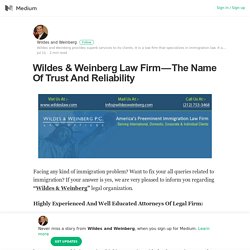 Want to fix your all queries related to immigration? If your answer is yes, we are very pleased to inform you regarding “Wildes & Weinberg” legal organization. Highly Experienced And Well Educated Attorneys Of Legal Firm: Experience and education, these are two root quality of any immigration lawyer. With their sharp knowledge and wide experience, they are capable of handling any kind of complicated case.Hence, the entire staff of the company is highly educated and are able to manage any case. Unique Qualities Of Wildes & Weinberg’s Attorney That Make Them Different From Others. Michael Wildes (@Michael_Wildes) Wildes & Weinberg P.C. in New York, New York. Immigration Lawyer: An Efficient Solution To Al... - Wildes & Weinberg, PC - Quora. The United States of America is termed as the place where there are fresh chances to succeed and the individuals leave no stone unturned to get an opportunity to begin their life there. 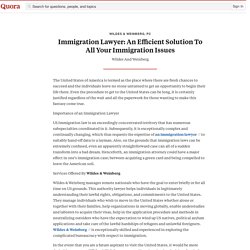 Even the procedure to get to the United States can be long, it is certainly justified regardless of the wait and all the paperwork for those wanting to make this fantasy come true. Importance of an Immigration Lawyer US Immigration law is an exceedingly concentrated territory that has numerous subspecialties coordinated in it. Subsequently, it is exceptionally complex and continually changing, which thus requests the expertise of an immigration lawyer to suitably hand-off data to a layman.

Also, on the grounds that immigration laws can be extremely confused, even an apparently straightforward case can all of a sudden transform into a bad dream. Why hiring an immigration attorney is necessary to avoid deportation? Deportation is the removal of an individual from a nation they are currently residing in and moving them to another nation, which is generally the birth country. 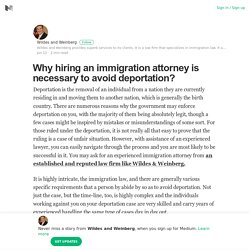 There are numerous reasons why the government may enforce deportation on you, with the majority of them being absolutely legit, though a few cases might be inspired by mistakes or misunderstandings of some sort. For those ruled under the deportation, it is not really all that easy to prove that the ruling is a case of unfair situation. However, with assistance of an experienced lawyer, you can easily navigate through the process and you are most likely to be successful in it. You may ask for an experienced immigration attorney from an established and reputed law firm like Wildes & Weinberg. It is highly intricate, the immigration law, and there are generally various specific requirements that a person by abide by so as to avoid deportation. Best Immigration Law Firm in New York City (NYC), New Jersey (NJ) - Wildes & Weinberg, P.C.

Wildes & Weinberg P.C. in New York, New York. Wildes & Weinberg P.C. — Bid Farewell To Immigration Hassles. If you are preparing to migrate to the United States but are snowed down under tons of immigration issues, you should consider consulting Wildes & Weinberg law firm, a group of reputed immigration legal advisors who can bail you out of trouble. They can help you comprehend the lawful subtleties of the nation identified with migration and will direct you in the correct way so you can do everything effectively.

A deportation defense legal counselor can convey many points of interest to your case and can balance the issues you will confront at Immigration Court. These points of interest may have the effect amongst winning and losing the game. How Do You Fight Deportation At Immigration Court? Wildes and Weinberg. Wildes & Weinberg P.C. Michael Wildes and Wildes & Weinberg, P.C., O visa expert lawyers secure O-1 Visa for Claire Hanson, celebrity hair and makeup artist. Once again, Managing Partner Michael Wildes, and his talented staff, were successful in their O-1 visa application on behalf of their client.

This time, the lucky recipient is Claire Hanson. Ms. Hanson's O-1 Visa will allow her to remain in the United States and continue her work with LBR Touring Inc., the corporate entity that directs the business functions of famed artist Mr. Lionel Richie and his concert tours. Wildes & Weinberg P.C.515 Madison Ave - New York NY - Reviews - Photos - Phone Number. Sanora O. L. I am really grateful to Wildes & Winberg team who helped me get my H1B visa. Totally recommended to anyone looking for legal help with US immigration matters. They are available to answer all your inq…uiries and make their clients very comfortable. A friend of mine who got a work permit with the help of this law firm told me about them.

I am really grateful to Wildes & Winberg team who helped me get my H1B visa. Wildes and Weinberg: Hire a Reliable Law Firm for Total Peace of Mind. Undeniably, immigrating to a new country is not an easy task. It involves a lot of formalities, legal task and much more things which make the whole process complicated. That's why people often say that handling the immigration process is not everyone's cup of tea. Therefore, in order to manage the immigration process, it’s quite essential to hire a reliable immigration law firm, such as Wildes and Weinberg, so that they can solve all kinds of complications and make the process an easier one for you. Wildes & Weinberg P.C. Wildes Weinberg presentations. 1000+ images about wildes and weinberg on Pinterest.