Tips on How PCB Designers can Avoid the Common Mistakes of PCB Assembly. Regardless of how long a designer has been in the business of designing printed circuit boards for pcb assembly, he is still prone to making a few mistakes here and there. 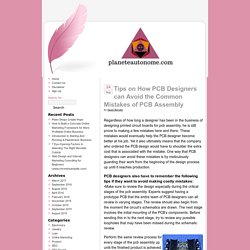 These mistakes would eventually help the PCB designer become better at his job. Yet it also ultimately means that the company who ordered the PCB design would have to shoulder the extra cost that is associated with the mistake. One way that PCB designers can avoid these mistakes is by meticulously guarding their work from the beginning of the design process up until it reaches production. PCB designers also have to remember the following tips if they want to avoid making costly mistakes: Lines and Curves: An aesthetical point of view with regards to printed circuit board design. Do you know what a printed circuit board is? 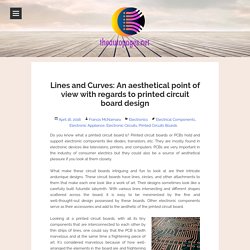 Printed circuit boards or PCBs hold and support electronic components like diodes, transistors, etc. They are mostly found in electronic devices like televisions, printers, and computers. PCBs are very important in the industry of consumer electrics but they could also be a source of aesthetical pleasure if you look at them closely. What make these circuit boards intriguing and fun to look at are their intricate andunique designs. Basic Guidelines in Designing Printed Circuit Board. Designing a PCB is one of the most crucial and important aspects of manufacturing any electronic product. 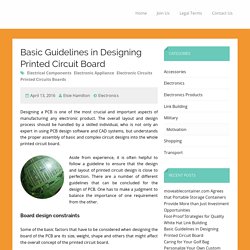 The overall layout and design process should be handled by a skilled individual, who is not only an expert in using PCB design software and CAD systems, but understands the proper assembly of basic and complex circuit designs into the whole printed circuit board. Aside from experience, it is often helpful to follow a guideline to ensure that the design and layout of printed circuit design is close to perfection. The Stages of PCB Fabrication. Whenever an electronic device stops working properly, there is often a huge chance that a component on the printed circuit board (PCB) has come loose or is damaged. 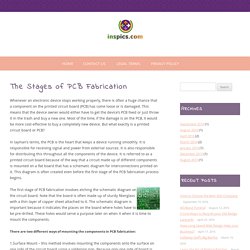 This means that the device owner would either have to get the device’s PCB fixed or just throw it in the trash and buy a new one. PCB Designing Role in Its Fabrication. PCB fabrication may seem simple, but it isn’t always the case. 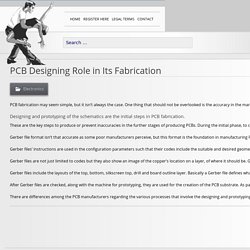 One thing that should not be overlooked is the accuracy in the manufacturing process, which is a major role of the designing process of PCB’s. The design should be exactly pictured and made according to the client’s specifications. PCB Fabrication as an Industry. PCB fabrication may look easy but in a larger scale, it is broader than what you think. 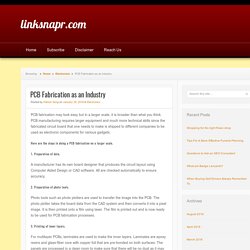 PCB manufacturing requires larger equipment and much more technical skills since the fabricated circuit board that one needs to make is shipped to different companies to be used as electronic components for various gadgets. Here are the steps in doing a PCB fabrication on a larger scale. 1. Preparation of data. A manufacturer has its own board designer that produces the circuit layout using Computer Aided Design or CAD software. 2. Photo tools such as photo plotters are used to transfer the image into the PCB. 3.

For multilayer PCBs, laminates are used to make the inner layers. 4. Advantages of Surface Mount Technology for PCB Assembly. Aside from serving as an integral component of computers, printed circuit boards also serve a vital function in automobiles, machines and other electronic devices. 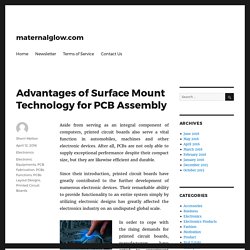 After all, PCBs are not only able to supply exceptional performance despite their compact size, but they are likewise efficient and durable. Since their introduction, printed circuit boards have greatly contributed to the further development of numerous electronic devices. Their remarkable ability to provide functionality to an entire system simply by utilizing electronic designs has greatly affected the electronics industry on an undisputed global scale.

In order to cope with the rising demands for printed circuit boards, manufacturers have opted to experiment with various PCB assembly methods. Printed Circuit Board: The Basics. From the construction of our simple science projects up to the latest advancements in robotics, there is still some basic knowledge that we must never forget. 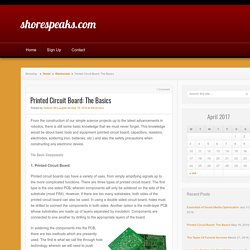 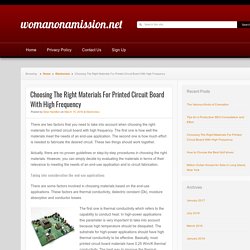 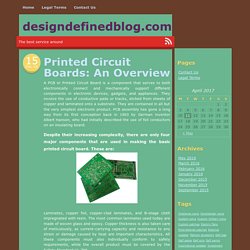 They involve the use of conductive pads or tracks, etched from sheets of copper and laminated onto a substrate. They are contained in all but the very simplest electronic product. PCB assembly has gone a long way from its first conception back in 1903 by German inventor Albert Hanson, who had initially described the use of foil conductors on an insulating board. Despite their increasing complexity, there are only four major components that are used in making the basic printed circuit board. These are: Laminates, copper foil, copper-clad laminates, and B-stage cloth impregnated with resin.

Technology used in PCB assembly has improved significantly over time. The Printed Circuit Board – Embodiment Of Evolution. What is common among mobile phones, game consoles, laptops, and even computers? Most would say that these are all must-haves in these modern times. All of these, and other things that are electronically operating have one common thing inside them – the printed circuit board. The printed circuit board has existed since the 1900’s but only gained popularity in the 1940’s after World War II. Before that, circuit boards were huge and bulky and used point-to-point connections.

They also had complicated wiring systems, which often ended up suffering from short circuits – especially since insulators back then had problems with wear. PCB Design Software Tools. When it comes to printed circuit board design, today’s software engineers have developed applications to make things easier, faster, and more efficient. PRINTED CIRCUIT BOARDS: THE HEART OF EVERYDAY COMFORT. The enjoyment that people experience nowadays is brought about by continuous technological research and improvement. The most evident benefit of improvement to people is comfort not only in their work, but also in their everyday lives. With the existence of appliances, simple machines, vehicles and vessels, computers and laptops, smart phones and tablets, and other electronic devices, life in general has become easier.

For instance, before, it takes a few months before a letter is sent from one place to another, but now, the same activity takes only a few seconds to complete. This kind of benefit will not exist without these electronic devices, but even the latter will not exist if platforms known as printed circuit boards (PCBs) are absent. Impact of the Advent of Printed Circuit Boards. The printed circuit board is one of the most amazing creations in the world of electronics. Just imagine that many large machines today could be controlled by a very small integrated circuit. Before, electronic circuits fill spaces as large as one room. Due to the advances in technology, circuits shrunk to become as tall as a door, then became as small as a chair.