Google. Outline. Voltage of an Electric Chair. Topic index | author index | special index We live in a time where people are commonly grouped, and therefore judged, according to their strong, somewhat black or white beliefs. 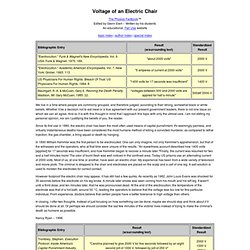 Whether it be a decision not to eat meat or a true agreement with our present government leaders, there is not one issue on which we can all agree. And so it is with this thought in mind that I approach this topic with only the utmost care. I am not stating my personal opinion, nor am I justifying the beliefs of you, the reader. Since its first use in 1890, the electric chair has been the most often used means of capital punishment. In 1890 William Kemmler was the first person to be electrocuted. However foolproof the electric chair may appear, it has still had a few quirks. In closing, I offer two thoughts. Nancy Ryan -- 1996 Editor's Supplement -- 1999, 2001 Related pages in The Physics Factbook: External links to this page: Death Row HV Question, Tesla Coil Mailing List Archives. William Kemmler - Things To Remember While Reading Excerpts From "far Worse Than Hanging":, Excerpt From "far Worse Than Hanging" Chair current death durston Excerpt from "Far Worse Than Hanging" Reprinted from the New York Times Published in the August 7, 1890, edition, on the front page William Kemmler was a vegetable peddler in the slums of Buffalo, New York. 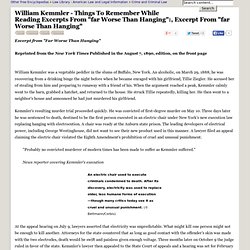 An alcoholic, on March 29, 1888, he was recovering from a drinking binge the night before when he became enraged with his girlfriend, Tillie Ziegler. He accused her of stealing from him and preparing to runaway with a friend of his. Kemmler's resulting murder trial proceeded quickly. An electric chair used to execute criminals condemned to death. At the appeal hearing on July 9, lawyers asserted that electricity was unpredictable. On May 21 the Supreme Court heard arguments in the case as to whether electrocution was constitutionally valid or not. On execution day Kemmler dressed in a suit provided for him and was escorted to the execution chamber in the basement of New York's Auburn prison where the electric chair awaited him. 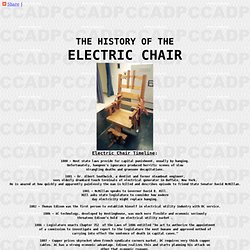 ELECTRIC CHAIR EXPENSIVE. - Costs New Jersey $1,171 Every Time State Puts a Man to Death. - View Article. The electric chair. Prior to 1890, most American executions were by hanging, the method that had been inherited from . 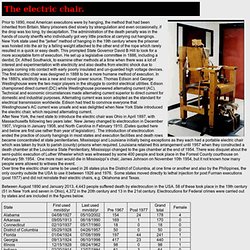 Many prisoners died slowly by strangulation and even occasionally, if the drop was too long, by decapitation. The administration of the death penalty was in the hands of county sheriffs who individually got very little practice at carrying out hangings. State used the “jerker” method of hanging in the 19th century where the prisoner was hoisted into the air by a falling weight attached to the other end of the rope which rarely resulted in a quick or easy death. This prompted State Governor David B Hill to look for a more acceptable form of execution. He set up a legislative committee in 1886, including a dentist, Dr.

Beyond Belief: Fact or Fiction - The Electric Chair (2) Execution on the electric chair explained. ELECTRIC CHAIR EXECUTION. Electric chair. “Old Sparky”, the electric chair used at Sing Sing prison Historically, once the condemned person was attached to the chair, various cycles (differing in voltage and duration) of alternating current would be passed through the individual's body, in order to cause fatal damage to the internal organs (including the brain). 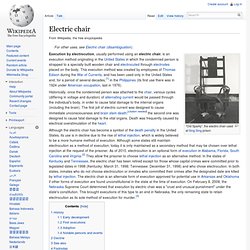 The first jolt of electric current was designed to cause immediate unconsciousness and brain stem death;[citation needed] the second one was designed to cause fatal damage to the vital organs. Death was frequently caused by electrical overstimulation of the heart. Although the electric chair has become a symbol of the death penalty in the United States, its use is in decline due to the rise of lethal injection, which is widely believed to be a more humane method of execution. History[edit] Early development[edit] Electric chair history and laws in the United StatesColor key: Secondary method only Has previously used electric chair, but does not today First executions[edit]