I am a retired psychiatrist. For three decades, my patients taught me precisely how each of the mental illnesses are subjectively experienced. These descriptions of their suffering led me to conceive of how and why the inner life of our mind

Republicans Democrats and Human Nature - Why We Became Human. A glaring weakness of the liberal agenda of social justice is that it does not appear to be rooted in the flesh and blood of human nature. 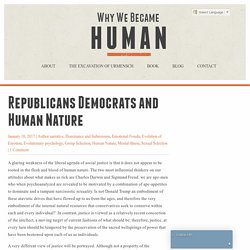 The two most influential thinkers on our attitudes about what makes us tick are Charles Darwin and Sigmund Freud: we are ape-men who when psychoanalyzed are revealed to be motivated by a combination of ape-appetites to dominate and a rampant narcissistic sexuality. Hobbits lived on Flores Island for 700,000 years.

From June 10 Science by Elizabeth Culatta: From the moment the announcement of a 1-meter-tall ancient human nicknamed “the hobbit” shocked the world in 2004, supporters and sceptics alike have longed for more fossils. 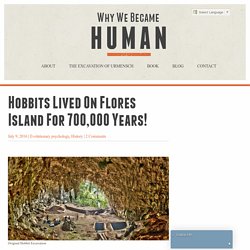 After the first burst of discoveries, the team kept digging, at the original find site and at other sites in Southeast Asia. But they found no human fossils—until now. This week the team announces [in Nature] that they have found specimens of a tiny hominin at a site called Mata Menge on the Indonesian island of Flores, 74 kilometers from the hobbit’s home in Liang Bua Cave. The haul is meager—a fragment of jaw and isolated teeth—but the fossils’ diminutive size suggests they belong to the hobbit’s species, Homo floresiensis, or a precursor to it. There have been nay-sayers about the original fossils, now dated to about 60,000 years ago about whether they could have been pathologically afflicted modern humans, but now those doubts are put to rest. Like this: The Urban Planet & the History of Life - Why We Became Human. The May 20th Issue of Science is entitled The Urban Planet. 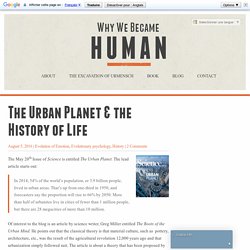 The lead article starts out: In 2014, 54% of the world’s population, or 3.9 billion people, lived in urban areas. That’s up from one-third in 1950, and forecasters say the proportion will rise to 66% by 2050. Andrew Solomon: "breathtakingly original. . .great endevor of the intellect" Andrew Solomon, after reading Old Mind, New Mind sent me these two sentences: In this breathtakingly original book, John Wylie proposes a new theory of mind, one that reconciles evolutionary biology with psychodynamics. 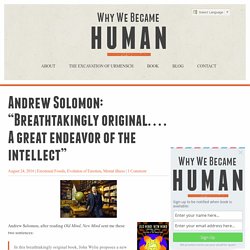 This is a great endeavor of the intellect and a deep review of consciousness itself. In this post, I return the compliment. Solomon’s Noonday Demon, An Atlas of Depression is a lavish gift of sympathy to those who suffer from the horrors of severe clinical depression, as well as providing a compendium of information about the disease. In my book I quote what I consider the best description to be found anywhere of what it feels like to be in the throes of a major depression. Depression minutes are like dog years, based on some artificial notion of time. Then in his remarkable book Far from the Tree: Parents, Children, and the Search for Identity, Solomon makes the following original observation: Like this: Like Loading...

Related. Emotions are in charge of behavior and cognition in human evolution. The most basic activity of this blog is to maintain vigilance of ongoing science, particularly in the fields of psychiatry and paleoanthropology but also in numerous other fields, and to apply all relevant new findings to the Blog’s broad paradigm of the human mind. 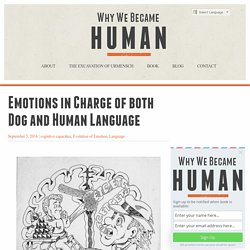 In the September 2nd issue of Science an article entitled, “Neural mechanisms for lexical processing in dogs” by Andics, et al. appeared. If you have ever had to lie still for an MRI, you can appreciate how difficult it would be to train an animal to sit still enough to have an even longer-lasting functional MRI while keeping the animal alert enough to respond to human verbal testing routines.

Bald Men of America Speak Out On Trump's Hair. Science from a peculiar source indicates that our bodies have been hairless for at least 3.3 million years. 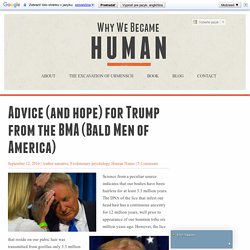 The DNA of the lice that infest our head hair has a continuous ancestry for 12 million years, well prior to appearance of our hominin tribe six million years ago. However, the lice that reside on our pubic hair was transmitted from gorillas only 3.3 million years ago, most likely from either scavenging gorilla remains or sleeping in their nests. Although it seems possible that pubic lice are so enamored by the unique properties of pubic hair, that they eschewed head hair altogether, the fact that these two species of louse have never interbred is taken to be evidence that we have been largely hairless for at least three million years.

An American Pilgrimage. I have never been one that would conceive of going on a religious pilgrimage, but have just returned from an American pilgrimage. 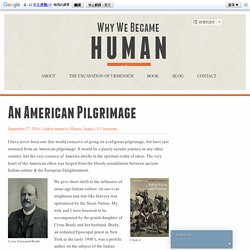 Neanderthals made jewelry. Schizophrenia and the Meaning of . . . . - Why We Became Human. In Old Mind, New Mind I chronicle how in my study of clinical depression I gradually came to the conclusion that the basic mechanism of all major mental illnesses is similar to cancer in that it represents the escape from regulation into unrestrained pathological hyperactivity. 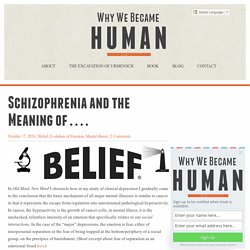 In cancer, the hyperactivity is the growth of cancer cells; in mental illness, it is the unchecked, relentless intensity of an emotion that specifically relates to our social interactions. In the case of the “major” depressions, the emotion is fear, either of interpersonal separation or the fear of being trapped at the bottom/periphery of a social group, on the precipice of banishment. (Short excerpt about fear of separation as an emotional fossil here) Although schizophrenia is known as a thought disorder, I became convinced that, similar to all other mental illnesses (excluding “organic” conditions, such as Alzheimer’s disease), it too represents the breakdown into pathological hyperactivity of an emotion. World Series and Human Evolution - Why We Became Human. Best Cheap Top Popular Mystery Book List. Welcome to my blog I started this blog in 2012 as a laboratory for testing new ideas. 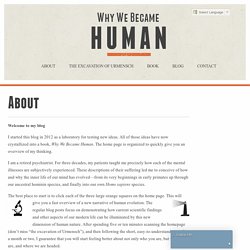 All of those ideas have now crystallized into a book, Why We Became Human. The home page is organized to quickly give you an overview of my thinking. I am a retired psychiatrist. For three decades, my patients taught me precisely how each of the mental illnesses are subjectively experienced. Evolution Why We Became Human Old Mind New Mind Emotional Fossils.