Facts for Kids- Brazil. Brazil's Activities Soccer is the national sport of Brazil. 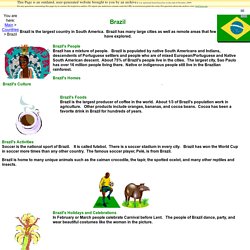 It is called futebol. There is a soccer stadium in every city. Brazil has won the World Cup in soccer more times than any other country. The famous soccer player, Pelé, is from Brazil. Brazil is home to many unique animals such as the caiman crocodile, the tapir, the spotted ocelot, and many other reptiles and insects. References:The Brazilian Embassy, Live Images from Brazil, Bem Vindo Ao Brasil, Lonely Planet, All images from Microsoft Office Clip Art and Gallery licensed through Microsoft Front Page and Microsoft. Interesting Facts about POLECATS. Fact 11 - Polecats can lock their jaws together so tightly it can be practically impossible to prise them apartFact 12 - They shelter in burrowsFact 13 - Ferrets are the domesticated descendants of the polecatFact 14 - The predators of Polecats include the Coyote, Bobcat, Owl and domestic DogsFact 15 - The collective name for a group of Polecats is a ChineFact 16 - Male Polecats are called HobsFact 17 - Female Polecats are called JillsFact 18 - The names given to babies are kitsFact 19 - The European Polecat is also called a 'fitch'Fact 20 - There a plenty of polecats and in terms of endangered species, they have been specified as LC (Least Concern) 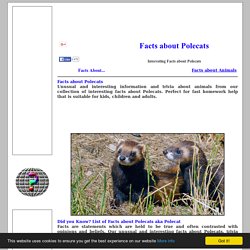 Kids from Brazil. Continent: Northeastern South AmericaClimate: Tropical and subtropical; some areas have an annual rainfall of more than 6 feetSchool: The school year runs from February through December. 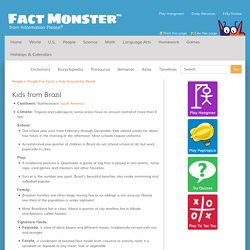 Kids attend school for about four hours in the morning or the afternoon. Most schools require uniforms. An estimated one-quarter of children in Brazil do not attend school at all, but work, especially in cities.Play: A traditional pastime is Queimada, a game of tag that is played in two teams. Jump rope, card games and checkers are other favorites. Fun Facts and Information for Kids about the Country of Brazil. Brazil Facts for Kids. Interesting Facts for Kids Rio de Janeiro in Brazil Here are some interesting Brazil Facts which were chosen and researched by kids especially for kids. 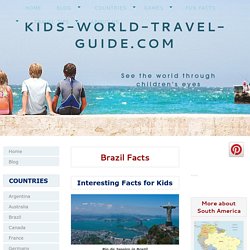 Population: 201 million people live in Brazil (2013)Capital: Brasilia, with 2.8 million inhabitants is the country's fourth largest city. The largest city in Brazil is Sao Paolo with 11 million inhabitants. Name: Republica Federativa do Brasil, Federative Republic of BrazilGovernment: Democracy, RepublicLanguage: PortugueseLiteracy: More than 91% of the people can read and write.Religion: mainly Christians (Roman Catholics 65%, Protestants 22%)Currency: 1 Real=100 centavosHistory: The country was inhabited by mainly semi-nomadic tribes before the arrival of the colonialists. Brazil Facts: GeographyWhere is Brazil? Brazil lies in South America, a flight from London/UK takes roughly 11.5 hours and from New York/USA a flight takes 9.5 hours. The Latin American country shares borders with all South American countries except Chile and Ecuador. 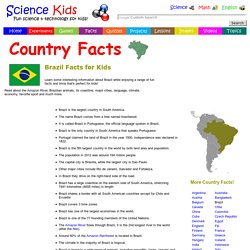 The name Brazil comes from a tree named brazilwood. It is called Brasil in Portuguese, the official language spoken in Brazil. Brazil is the only country in South America that speaks Portuguese. British Wildlife Centre: The Animals. Red_squirrel_fascinating_facts. 20 Fun Facts About Owls - Owl Trivia. 10 Fascinating Facts About Foxes (With Photos) A new three-part TV programme described by Channel 4’s Sara Ramsden as “everything you ever wanted to know about foxes but were afraid to ask” begins Monday, 30 April 2012. 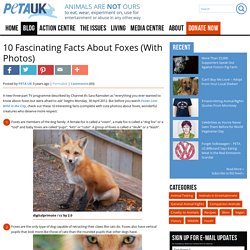 But before you watch Foxes Live: Wild in the City, check out these 10 interesting facts (complete with cute photos) about foxes, wonderful creatures who deserve more respect: Foxes are members of the dog family. A female fox is called a “vixen”, a male fox is called a “dog fox” or a “tod” and baby foxes are called “pups”, “kits” or “cubs”. A group of foxes is called a “skulk” or a “leash”. Digitalprimate / cc by 2.0Foxes are the only type of dog capable of retracting their claws like cats do. Law_keven / cc by 2.0 You can help foxes! Pledge never to wear the skin of a fox or any other animal.Learn more about how foxes and minks are treated on fur farms.Speak out against the fur trade, which massacres millions of foxes every year.Learn about other wild animals who live in Britain such as badgers and hedgehogs. River Otter Facts for Kids - NatureMapping. River Otter (Lutra canadensis) What they look like: The River Otter is built for swimming - they have a streamlined body, short legs with webbed feet, dense fur that keeps them warm, a tapered tail, small ears, and nostrils that can close underwater. 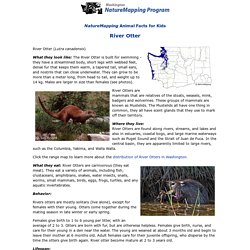 They can grow to be more than a meter long, from head to tail, and weight up to 14 kg. Males are larger in size than females (see photos). River Otters are mammals that are relatives of the stoats, weasels, mink, badgers and wolverines. These groups of mammals are known as Mustelids. Where they live: River Otters are found along rivers, streams, and lakes and also in estuaries, coastal bogs, and large marine waterways such as Puget Sound and the Strait of Juan de Fuca. All About Animals > Primary Kids > Animal of the Month.